Libraries and social services to the rescue? 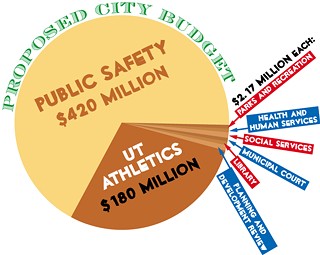 Drastic changes to the General Fund – the taxes and fees used to cover city services – are being contemplated as the city seeks to absorb the cost of the UT athletics program.

After adding a 25% buffer to public safety and athletics costs – enough to keep pace with the rising salaries of police, fire, EMS, and Longhorns coach Mack Brown – only $13 million is left to cover the remaining General Fund departments.

The traditionally fraught relationship between UT and the city of Austin – local entities with powers and agendas often at odds – has been strained further by the surprise suspension of the UT athletics program, which caught the city flat-footed. However, an ambitious plan to keep the entire athletics program afloat with city funds may see the school and the city come together.

The city is mulling measures to cover the roughly $173 million cost of the program. And surprisingly, city officials say it can be accomplished without a tax increase. "In this economy, the last thing we need is a tax hike," said Mayor Lee Leffingwell. "There's only one hike we need – and that's the one coming through the Longhorns' center's legs!"

The measure won't come without cost. The city's $613 million 2009-10 General Fund, covering services including public safety, social services, and parks and recreation, would have to absorb massive cuts to finance the program. And public safety salaries (as usual) are off-limits. "It's an imperfect solution," Mayor Pro Tem Mike Martinez said of the massive cuts. "But considering the good our police contract has brought us – the reasoned judgment of our independent arbitration system, the transparency in disciplinary matters – we'd be idiots to go back to civil service bargaining."

To make up the balance, libraries would be open only one day a week, city pools would be filled with concrete and repurposed as "urban playscapes," and under one controversial proposal, city parkland would be sold at auction. (Stratus Properties is said to be in a heated bidding match with Advanced Micro Devices, which, dissatisfied with its current campus over the Edwards Aquifer, is considering a relocation to Pease Park.) The moves would create several out-of-work librarians and displaced parkgoers, but since many of them are also football fans, the city believes they would welcome the opportunity to continue to listen to the games on KVET 1300AM. "They're sure not going to be able to afford season tickets," acknowledged Assistant City Manager Rudy Garza.

The cuts haven't been well-received by everyone at the city: In the wake of proposals to rescind two neighborhood zoning liaisons from the budget, Council Member Laura Morri­son's City Hall office has been barricaded, with the words "OVER MY DEAD BODY!" carved on the door in knifepoint. And at press time, Council Member Bill Spelman (who moonlights as a UT professor) was entering the ninth hour of a marathon monologue graphically weighing the pros and cons of the proposal and showing no sign of a conclusion.

One option has been floated to offset the cuts: a new tailgating user fee added to the bottom line of every city of Austin utility customer. Like the transportation user fee bundled on utility statements to offset road repairs, the surcharge – ostensibly to offset the costs associated with Longhorn tailgating (e.g., enormous piles of trash) – could finance the athletics programs without technically raising taxes. Early estimates have the fee at approximately $78 per billing cycle, with a gradual 90% increase rolled in over the next three months.

A third proposal, which could offset the entire program with no cost or impact to citizens – an additional 1% fund transfer from Austin Energy – was summarily dismissed by City Manager Marc Ott, who cited the need to preserve the city's AAA bond rating.

No matter the eventual strategy, city officials appear intent on preserving the athletics program, which they argue serves the broader community, as well as students. "When the time comes – when the eyes of Texas are turned upon us," says Leffingwell, "I'm just glad an Austin boy like myself is in the Mayor's Office, instead of some Aggie."