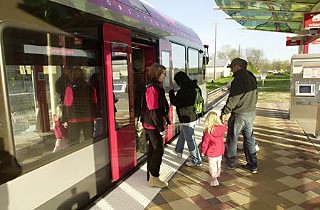 Passengers board Capital Metro’s Red Line, which made its debut Monday. See “You’ve Got Rail!” (Photo by John Anderson)

If the University of Texas administrators thought spring break would bring a vacation from public criticism of their plan to close the Cactus Cafe and terminate the informal classes program, last week was a rude awakening. On March 17 the Chronicle announced that the cafe had won the Austin Music Award for best acoustic venue, and on March 20 cafe manager Griff Luneburg received the award to a standing ovation at the Austin Music Hall. After a brief microphone glitch (which awards ceremony emcee Andy Langer blamed on "the UT regents"), Lune­burg thanked the voters. "We always knew the Cactus was an important room," he said. "Everyone feels like they own a piece of it." Earlier that day, the Travis County Democratic Party annual convention passed a resolution calling on the Texas Union board "to commit to keeping the Cactus Cafe open in its present form, preserving its fundamental character and keep the Informal Classes as an offering to the Austin com­mun­ity." The resolution will go to the state convention in Corpus Christi, June 25-26. However, the UT administration plans to make a final decision on both institutions in late April. – Richard Whittaker

The Texas Freedom Net­work, an activist organization dedicated to fighting the religious right's influence in schools, has grown weary of trying to get the State Board of Education's fundamentalist bloc to do the right thing. So now it wants to go over the SBOE's head to the Texas Legislature – TFN has started a petition called Just Educate wherein it charges "extremists" on the SBOE with undermining science, appointing "unqualified political activists to help rewrite history and twist the curriculum in our children's classrooms to promote political agendas," and censoring "authors, important historical figures and ideas that don't fit into their own narrow worldview." The petition calls for politicians to "stop dragging our children's schools into the 'culture wars'" and to let curriculum and textbook content be decided by scholarly experts, teachers, and professors. "This problem isn't going away," says TFN's Dan Quinn. "If [legislators] care about what's happening to our public schools and the state's reputation, they're going to have to act." To sign the petition, go to www.tfn.org/justeducate. – Lee Nichols

A Handful of Hostile Hipsters

Although thousands flocked to Downtown Austin last week for the Music portion of the annual SXSW Festival, Austin Police report making just 14 arrests Downtown from Wednesday through Sunday, March 17-20. Five of those were for fighting, one was for aggravated assault (related to a fight), and the rest (perhaps unsurprisingly) were for public intoxication. – Jordan Smith

The tournament of 64 is almost done. No, not NCAA Basketball – we're talking about Austin Community College's search for a mascot. We're not quite sure why it needs one – ACC doesn't even have sports teams – but a search committee has weeded through 64 suggestions to replace the pink bunny serving in the interim of "Mascot Madness." (We kind of like the Fighting Pink Bunnies, but oh well.) The mascot search committee has narrowed it down to the Final Four: River Bats, Blazers, Starblazers, and Bbhoggawacts (no, we don't know either – keep Austin weird, kids). And now Central Texans can vote at www.austincc.edu/mascot through April 2 to pick a winner. Frankly, we're a little annoyed that Grackles and Salamanders didn't make it past the second round. – Lee Nichols