Quintana trial to be public 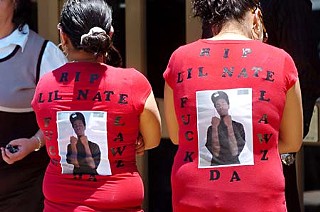 On March 19, federal Judge Sam Sparks denied the city's bid to have the court impose a gag order in the civil rights case filed on behalf of Nathaniel Sanders II by his family. Sanders was shot and killed in May 2009 by Austin Police Officer Leonardo Quintana during an early-morning incident in an Eastside parking lot. The motion for a gag order was filed under seal last Monday by Robert Icenhauer-Ramirez (whom the city hired to represent Quintana in the federal suit) and was withdrawn on Friday after a brief hearing before Sparks. Attorney Adam Loewy, who is representing Sanders' family, was pleased: "It is shameful that the City of Austin sought to limit my clients' constitutional right to free speech in a civil rights case," he wrote in an e-mail to the Chronicle. "The Court correctly deferred to the First Amendment and denied this ridiculously unconstitutional motion. We look forward to a public and open trial on this matter in July."