AWPC returns to its feminist roots, but not everyone's happy 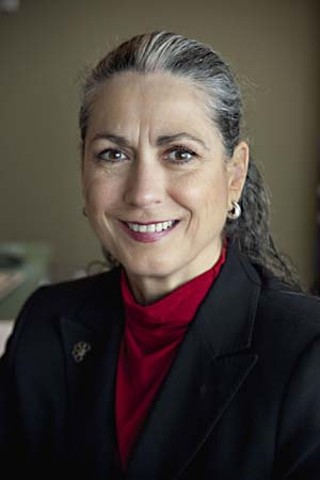 Late last year, the Austin Women's Political Caucus was handed a do-or-die directive by its national umbrella, the National WPC: Either align itself with the national group's mission of helping women – and only women – win election to public office or risk losing its affiliation with the national and state caucuses.

This month, following a passionate debate over whether to follow the national caucus' directive or disband in protest, more than 30 AWPC members (of roughly 50 in attendance) voted to conform to the national organization's policy of women-only endorsements.

The decision sparked an immediate outcry from local Demo­cratic activists and at least one elected official – Travis County Constable Bruce Elfant, who has garnered the group's endorsements over the years. Indeed, the local caucus, a nonpartisan but Democratic-leaning organization with male and female members, has a long history of supporting political candidates of either gender who are committed to feminist causes. The decision to slice men out of the AWPC picture touched off an online debate: Was the action ridiculously regressive or an attempt to return the group to its original women-driven mission? Within hours after AWPC's March 11 vote, Elfant sat down before his computer and tapped out his dismay on his Facebook page. "It is so disappointing that AWPC will never again endorse me," he wrote, "regardless of my record versus that of any future opponents."

More than a dozen men and women weighed in on Elfant's comments, with the vast majority sharing his sentiments. "A step backwards, not forward," one wrote. "So ridiculous," another complained. Only a few people – all women – applauded the AWPC decision. One suggested it might have the tangential benefit of tamping down the local practice of vote-stacking – the mass purchasing of memberships during an election year to ensure one candidate's endorsement over another.

The vote marked a symbolic victory of sorts for Lulu Flores, a longtime AWPC member and also president of the National Women's Political Caucus, the brainchild of the architects of the Seventies feminist movement, including local Democratic icon Liz Carpenter, who died March 20. Carpenter founded the Texas Women's Political Caucus at a time when only two women – Barbara Jordan and Sissy Farenthold – were serving in the Texas Legislature. Flores had hoped to follow in their footsteps. She has twice run unsuccessfully for a legislative seat, losing both times to men – to Glen Maxey in 1992 and 10 years later to current Rep. Eddie Rodriguez, Maxey's hand-picked successor. Maxey and Rodriguez were both backed by Austin's powerful Democratic machine, which, despite its progressive credentials and history of promoting women candidates, remains largely dominated by white men. Its political reach extends to nearly every Democratic and nonpartisan issue-specific club in town – including the AWPC, which voted to endorse Maxey over Flores in the hotly contested race.

Factions within the women's caucus generally spike during an election year, particularly when the group favors male candidates over women with a longer history in the organization (the caucus, for example, endorsed Mike Martinez over Eliza May for City Council and Jim Coronado over Karyl Krug for judge). In each instance, the prevailing argument has been that the male candidate was simply better qualified for the position. This year, the caucus failed to endorse in three key judicial races because it could not reach a required two-thirds majority.

For women who have felt shut out by the so-called "party bosses," the AWPC's vote this month represents a fresh start. "I was pleasantly surprised," Flores said. As the organization's national leader, Flores' first task is to extend an olive branch to AWPC President Cynthia Veidt, who strongly opposed the women-only policy, as did most of the group's officers. (Veidt did not respond to requests for comment.) Looking beyond any simmering hard feelings over the decision, Flores envisions turning AWPC into a local version of Annie's List, a statewide organization that actively recruits pro-choice Democratic women to run for state legislative seats. Flores sees no reason why the local caucus can't do its own recruiting of candidates for city and county offices. "Instead of waiting for candidates to come to us, I'd like to see us recruiting women and grooming them for office early on," she said.

The key to AWPC's success depends on the group's ability to keep its longtime members and recruit new ones. Demo­cratic activist Donna Beth McCormick, for one, has belonged to the group for 15-odd years – but says this year could be her last. With the new policy in effect, she said: "We're cutting off our nose to spite our face. The reality is that sometimes a male candidate is better qualified, and there are plenty of men who support our cause."

But that argument is countered with another. "We don't have to endorse in every race if we don't feel the [woman] candidate is qualified," Alicia Del Rio, an AWPC member and president of the Texas caucus, said before the vote.

Another AWPC member, Celia Israel, opposed the women-only policy but did not attend the March 11 meeting to cast her vote. She suspects other members skipped the meeting for the same reason. "It was a foregone conclusion," she said of the outcome. "If we hadn't passed the language as proposed, we would no longer be a viable caucus." For her part, Israel, a former AWPC president, says she's already mourning the loss of the "old AWPC." She observed: "Throughout most of its history, the local caucus has always had its own inertia, its own energy, its own way of doing things. I don't think that same energy exists now."

Krug – the former judicial candidate who lost an AWPC endorsement to a male opponent – is perfectly happy with the women-only policy. She noted the irony of Car­pen­ter passing on less than two weeks after the caucus vote. "I think it was a 'God thing,'" she said, "that we returned the AWPC to the path she intended before she died."