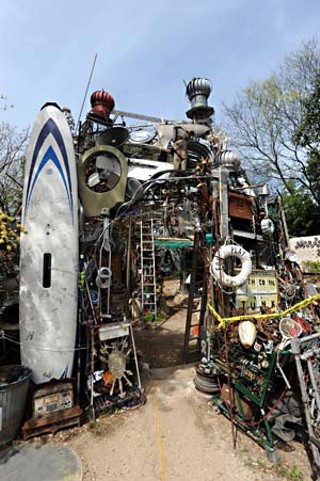 Vince Hannemann started constructing his Cathedral of Junk in 1988. Since then, the strange structure has become a three-story, 60-ton South Austin landmark and an icon of roadside Americana. Now the city of Austin's Public Assembly Code Enforcement unit has given him less than two weeks to bring it into compliance – or they will bulldoze it.

The cathedral, located on Lareina Drive just south of Ben White, is made of discarded and found artifacts and has steadily grown as people have made donations. It has been featured in several books and even on a tourism-boosting postcard published in 2009 by the city. Hannemann says PACE gave it a clean bill of health in September 2009. "They've made me clean up some miscellaneous stuff I've had around," he said, "and just left me be."

City spokeswoman Jennifer Herber called the cathedral "a really cool structure" with safety issues. Responding to a public complaint received March 9, PACE inspectors returned March 10 and found violations including unsafe wiring and a ladder being used for stairs. The unit was obligated to issue a notice of violation, which comes with a seven-day deadline. "That doesn't mean he has to do everything in seven days," said Herber. "It simply means he has to take some action with the city."

The PACE unit became a source of controversy in 2008 when it gave another South Austin landmark, the Enchanted Forest, similarly little warning about noncompliance (see "Permit Woes," Aug. 1, 2008). Part of the problem, Herber said, is that "code compliance is complaint-driven." When a complaint is received, PACE is legally obligated to act. While she said everyone would prefer it to be more about advice than enforcement, "We just don't have the staffing to be proactive."

Hannemann is now working to pull the structure back within the easement – another request by the city – and remove any wiring; then he can apply for a certificate of occupancy and a building permit as the city requires. He called these "reasonable requests, but they've only given me a limited time to do it." He has pulled a permit with the city's Development Assistance Center, which gives him an extension to March 31. "I've had a whole bunch of volunteers helping me get it out of the setback," he said. "As soon as we're finished doing that, we'll get the survey company and an architect to draw the plans for the permit." 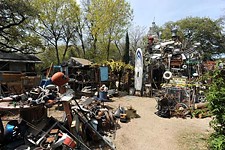 Don't Touch My Junk!
A long and winding trail leads to a fork in the road

Chapel of Junk?
Cathedral of Junk is back in business, sort of