What's your say on sprawl?

Tweet
print
write a letter
The Capital Area Metropolitan Planning Organization has scheduled a series of public meetings, inviting review and comment on its draft 2035 transportation plan, currently dubbed "People, Planning and Preparing for the Future: Your 25 Year Transportation Plan." The core question: Are you happy with road-based sprawl, or do you expect your regional planning organization to lead the region toward more sustainable development patterns? (See "Developing Stories," Nov. 27, 2009.)

The sprawl alternative, called "centers," would direct new density toward live-work-play nodes accessible both by major roads and by expanded transit. That strategy would apply across a five-county region, as CAMPO recently expanded its reach (and representation) to include Travis, Williamson, Bastrop, Caldwell, and Hays counties.

The draft 2035 plan, which reflects previous rounds of public input and political finger-in-the-wind testing, blends the centers concept with a business-as-usual "trend" scenario that would greenlight all roadway projects already planned and in the budget pipeline.

As drafted, the multimodal plan includes roadway, transit, bicycle, and pedestrian facilities, supporting a regional goal of reducing vehicle miles traveled and emissions of both air pollutants and greenhouse gases. But does it push hard enough on that goal? "This is the time to let us know what you think," says Sam Biscoe, Travis County Judge and the new CAMPO policy board chair.

Read the draft plan online at www.campotexas.org, or, for that old-fashioned face-to-face experience, drop by one of six upcoming open houses (all will take place from 4 to 7pm) to learn more and share your thoughts:

Folks can also sign up to speak at a public hearing on Monday, April 12, 6pm, at the Austin Convention Center, 500 E. Cesar Chavez, Ballroom A. The board expects to make a final decision on the 2035 plan by early June. 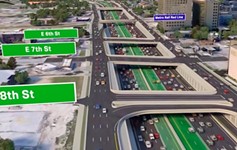 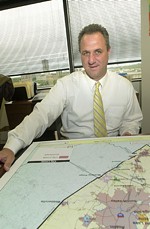