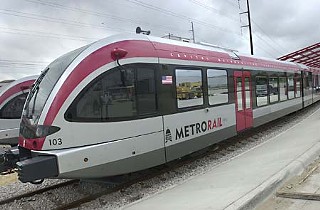 Could Capital Metro's MetroRail Red Line, the new Leander-to-Austin commuter rail that begins passenger service Monday, actually make traffic congestion worse? In my personal experience, it already has – at least for one intersection near the train's route.

I've been talking lately with Jim Skaggs, the former Tracor CEO and anti-rail activist who helped kill Cap Metro's light rail proposal at the ballot box in 2000. In one e-mail exchange, he made an assertion that "the commuter [train] will probably increase congestion. It carries very few people but at each of the dozens of road intersections, it will stop and delay more people than ride the train."

We'll see if that argument holds up over the long term, but right now he can certainly find good ammo on Justin Lane, near the problematic crossing gate at North Lamar and Airport Boulevard – which, despite timing refinements, is still problematic. (The train is currently doing test runs.) 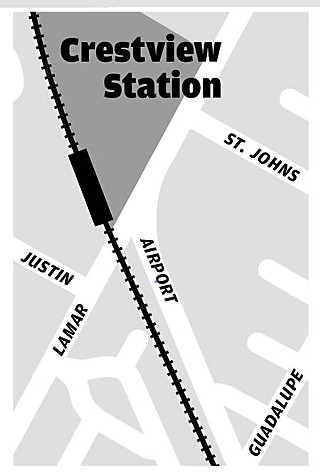 While Capital Metro fine-tunes the timing of the crossing gates on North Lamar, the city needs to figure out the traffic signal timing on Lamar and Justin Lane.

The waits on Lamar aren't quite as bad as in the past, when southbound trains caused the barriers to come down too early (although they still stay down for no reason while trains pick up passengers over at the Crestview Station, several hundred feet away and safely off the road). But there remains the problem of northbound trains triggering the gates to momentarily (and unnecessarily) come down, because the monitoring devices don't realize the train will stop at nearby Highland Station.

But the real problem is for drivers on eastbound Justin seeking to turn north onto Lamar (it's a major exit point for residents of the Crestview and Brentwood neighborhoods trying to access both Lamar and Airport). Because of the need to clear backed-up traffic off Lamar after the train passes, the Justin traffic light skips a green – turning a wait that's normally just under two minutes into an average of more than five, sometimes longer.

I experienced this last week, attempting to get from my neighborhood to, ironically enough, a Capital Metro meeting. The wait made me late. I decided to monitor the intersection a couple of days later: During the busiest parts of morning and evening rush hours, I timed the Justin light during 12 train passages, and the average wait for the lead car in the queue was five minutes and 23 seconds. Evenings were worse than mornings, with an average wait of five minutes and 59 seconds, including one mind-numbing wait of almost nine minutes!

This wait often causes drivers waiting at the back of the line to miss yet another green and endure yet more waiting, especially when there is already a long queue when the crossing arms first drop. The worst I witnessed was at 7:52am, when 20 cars were backed up, and the last 12 in line didn't make it through. And this doesn't count the many, many drivers who get frustrated, give up, and turn south on Lamar instead, probably seeking an alternate route to Airport Boulevard.

In the grand scheme of things, perhaps five (or even nine) minutes doesn't seem like that big a deal. But when you're sitting there in your car, idling your engine and doing nothing ... well, you can feel the road rage coming on. 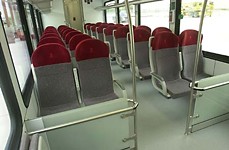