Developing Stories: 'Every Day It's Getting Worse'

Strategic Mobility Plan marks a way out of permanent gridlock 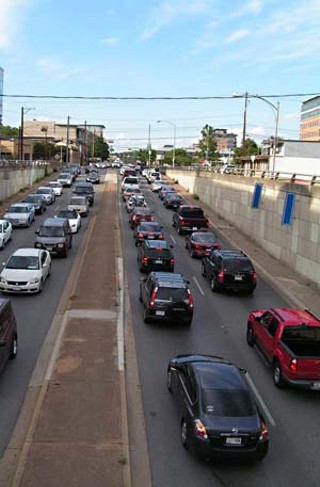 Gridlock on Lamar (Photo courtesy of City of Austin)

Crawling toward Downtown last week in 8:30am bumper-to-bumper traffic backed up for blocks on South Lamar, I had plenty of leisure time to reflect on transportation planning in Austin (and to wish I were traveling by bicycle, streetcar, or helicopter). The city is poised to plunge into the rail-transit business – with its central-city circulator Austin Urban Rail project – yet has barely dipped a toe into the transit-oriented development business. Transit-successful cities (e.g., Portland, Ore.) fund streetcars with tax-increment financing – bonds gradually paid off from the stream of increased property taxes that streetcar lines help create. Property values rise along the rail line, new mixed-use developments appear and desirable "place-making" occurs around rail stops, and the resulting increments of increased property tax base are captured to pay off the investment in rail.

But it doesn't all happen magically; it's got to be done just right. The city of Austin knows the principles but isn't yet organized to deliver on the economic development side of successful transit-oriented development for its Austin Urban Rail project. If we're going to build a streetcar and plan to tax-increment-finance it, we have to pick a route that's ripe for major redevelopment, where value-capture financing can work. City Council is scheduled to be briefed on the funding plan April 29 and to make an initial system investment decision May 27.

One Step at a Time

A Feb. 25 briefing to City Council on the city's emerging Strategic Mobility Plan – recently showcased at community-input forums all around town – was cause for optimism. The city isn't just doing a planning exercise; it has reorganized, staffed up, budgeted, and marshaled the moxie to implement the plan's recommendations beginning in April. Launched just last year, the city's Trans­por­ta­tion Department is beginning to tackle Austin's now-big-city mobility woes in a comprehensive fashion. All modes for getting from place A to place B – walking, bicycling, taking rail and bus transit, and driving – are being woven into one citywide mobility-solutions tapestry. We've talked about getting multimodal forever yet stayed stuck in traffic. Things are finally moving.

Mayor Lee Leffingwell, recognizing that a plan is only as strong as the dollars that sustain it, continues to advocate for a November 2010 transportation bond referendum. He said from the dais Feb. 25 that city demographic data indicates 1,500* people a day are now moving into Central Texas (50 of them within city limits) and adding their cars to already choked roads, so "every day it's getting worse." Transportation Department Director Robert Spillar cited recent data showing that central city roads are now at 100% capacity. Asserted the mayor, "Doing nothing is not an option."

But the vote for bond funding isn't a done deal; there's been push-back, most prominently from Council Member Laura Morrison and Comprehensive Plan Citizens Advisory Task Force member Mark Yznaga, tied to concerns that this bond vote would delay (likely by two years) or at least limit the city's next general-obligation bond election. Leffingwell argues that, given our grueling traffic, Austinites should be allowed to vote as soon as possible on funding the first chunk of the multimodal Strategic Mobility Plan. The big question: whether that includes building an initial segment of urban rail (to be named April 22, most likely), bundled with citywide roadway and pedestrian/bicycle improvements.

Leffingwell also scolded the Austin American-States­man for that council-morning's front-page urban rail story, because it failed to report on that project in the larger context of the Strategic Mobility Plan. It showed only a fully completed system, suggesting it could cost $1 billion, without consideration of how such a system would be funded and built in manageable increments over time. City officials said that story and the next day's follow-up immediately fanned anti-rail fears (the Chronicle News desk received a few fact-light e-mail blasts). The story created the impression that the system could initially launch with two separate north-south lines Down­town; in fact, any proposed system would be built out gradually in a 20-year plan. (This November, we'd likely vote on funding just one north-south route.) Leffingwell and other city officials are keen that Austinites see rail as one part of an overall strategic plan.

The strongest case for central-city rail transit is that it would make the whole region work better. It would link Downtown jobs to relatively affordable homes in neighborhoods and link Central Austin to commuter rail, which in turn would connect to outlying suburbs and towns where cheaper houses are being built. (In this sense, rail transit is in part being pursued as one affordable-housing solution.) Austin voters are most likely to endorse a transportation bond package if the central urban rail increment is bundled with other projects – near their own homes and workplaces. Give the Braker Lane folks a new managed lane on MoPac, Clarksville cyclists a safe north-south bikeway, Eastside bus riders improved sidewalks around bus stops, and Oak Hill suburbanites some gridlock relief, and you can probably get rail, too – while giving everyone broader hope and specific relief.

Which brings us to East Riverside and the importance of getting tax-increment financing right there to fund the proposed rail line – and especially its long-term operations and management. If the East Riverside Corridor Master Plan is implemented correctly, new city-funded rail and streetscape infrastructure would spur midrise projects that could transform an ailing, crime-challenged swath of the city. What's murky is whether the city would prioritize building that increment of the system sooner if it had compelling information on how corridor redevelopment could pay for the rail increment itself. When City Council voted to adopt the master plan on Feb. 25, it gave no direction to staff on pursuing a value-capture financing plan. But late last year, it had authorized spending up to $200,000 to have Capitol Market Research (Charles Heimsath) do an "economic impact analysis study" for the whole potential urban rail system, to include value-capture projections. That's a good start. Next, the city must anoint someone to leverage those projections – and the city's huge investments in rail (and sidewalk, bike, and road) improvements – to attract private investment, create predictability for the capital markets, and cut some partnership deals with the state and the University of Texas.

To be realized, the visionary master plan needs a strong, realistic financing and economic development plan. The city should bring in a team that really knows what it's doing to write a regulating plan and code while engaging private developers as investment partners. That's the way to boost the city's property tax base, which in turn can pay for the rail line out in the Riverside area. If we wait on city bonding capacity alone to fund it, we'll still be waiting for the train when today's newborns are in college.

[Editor's note: The mayor misspoke when he said that 1,500 people a day are moving to Central Texas; his office has since corrected the error, saying: "The net population increase of the five-county area is 150 per day, not 1,500 per day."] 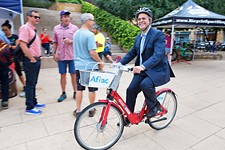 CodeNEXT’s New Friend, the Strategic Mobility Plan
Plans can’t be made in silos