In time for SXSW, Austin rolls out miles of new bike lanes and features 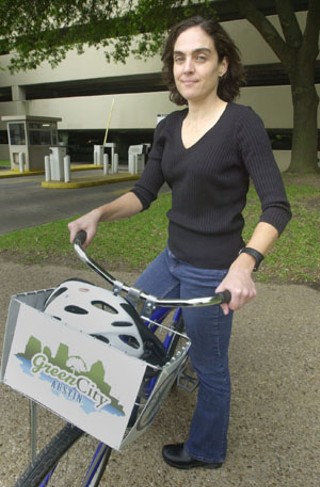 When Central Austin streets become crowded and traffic-snarled and the spring weather is fair, zipping around by bicycle becomes an appealing transportation choice. What better time to try two-wheeled transport into Down­town than today through March 21, when South by Southwest brings up to 150,000 people (most from out of town) to Central Austin. As crowds fill the streets (some closed to cars) around the Austin Convention Center and about 130 venues, traveling by bicycle offers a way to bypass congestion and parking hassles. For SXSW attendees trying to reach far-flung venues, it can also beat walking for miles or trying to hail rare taxicabs; this year, venues extend from the Alamo Drafthouse South Lamar to the Austin City Limits studio (near Dean Keeton and Guadalupe) and from the Mean-Eyed Cat on West Fifth to the Vortex theatre out on Manor Road.

Serendipitously, the city of Austin has been making the city streets safer and more accessible for cyclists. In fiscal year 2009, it opened more than 20 linear miles of new, dedicated, on-street bike lanes (with no parking allowed in them), thanks to a revived city bicycle program. Ten miles of new lanes opened in the last quarter of fiscal 2009 alone – more than in any full year in the city's history – bringing Austin citywide to a total of more than 131 miles of bike lanes. Last year the Lance Arm­strong Bikeway, a new major west-east route, opened a safe, dedicated path: The off-road portion starts at Austin High School (near MoPac) and continues east past Lamar, connecting to the Shoal Creek Greenbelt. (From there it jogs up to Fourth Street, where a bridge under construction will provide safe cyclist passage over Waller Creek, and continues to I-35 and the Eastside.) As befits Austin's rep as a green, sustainable, fit, and outdoorsy city, we're rolling toward a new bike city future. 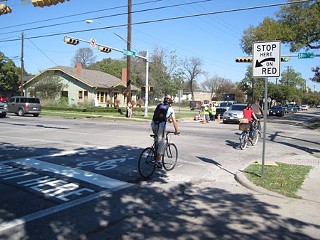 This cyclist departs a "bike box," a new intersection waiting area that makes cyclists safer and more visible to motorists. (Courtesy of City of Austin)

Austin's growing system of bike signage and lanes – the paint on the street – is the most visible evidence of a resurgence in the city's bicycle program. In the last economic downturn (2001), due to city budget cuts, the bicycle program lost its manager and shrank to 1.5 to 2 technical staffers. Without project managers, the program couldn't even get projects rolling for its available funds – $5 million to $10 million in bond monies, some still left from 1998 and more from the 2006 bond referendum. The sidewalks program, which focuses on accessibility improvements, had a similar problem. Both programs are housed at Public Works – within the Neighborhood Connectivity Division that also handles urban trails and safe routes to schools – but work closely with the Transportation Department, where bike program staffers have an office.

Things started improving in August 2006, when Annick Beaudet was hired to lead the bicycle program. Beaudet credits former Public Works Director Sondra Creighton, also a cyclist, with recognizing that the program needed more resources and attention. Beaudet understands how the city works, having served a previous stint with the program from 1997 to 2000, and she's a passionate cyclist herself. (Her co-workers brag that Beaudet is "the fastest woman in the state," since she placed first in the 2008 Texas State Time Trial. She came in second in 2009 in the 25-mile contest.)

Beaudet and Creighton successfully made the business case for adding new positions, one in 2007 and another in 2008. Once the program was properly staffed, new bicycle projects finally started moving through design and into construction last year. Creighton also elevated the bicycle program manager within the city org chart, a huge boost to the program's ability to work collaboratively with department directors, council offices, and community partners. 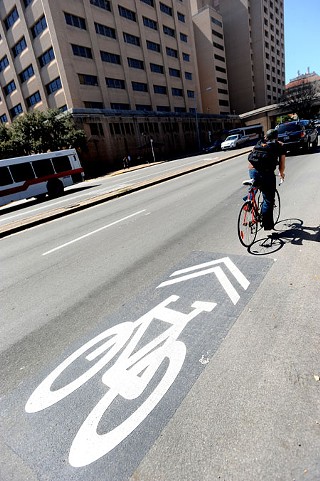 This “sharrow” marking reminds motorists to share the lane. Cyclists should own the lane by riding straight through the center of the arrow. (Photo by John Anderson)

Beaudet gets out in the community frequently as the "face" of the city's bike program (sometimes becoming a target for anger toward cyclists, as in the current debate over the proposed Nueces Bike Boulevard). She and other staff keep abreast of best practices and innovations internationally and work to incorporate them into Austin's bike program. They've gradually helped the bicycle community, as well as Austin's many advocacy and cycling organizations, positively engage with the city and gain a collective voice. At the same time, program staff work to educate all Austinites that city streets aren't just for cars. For example, the city has launched the Give 3 Feet Campaign to raise awareness of the city's recently adopted "three-foot safe passing" law, specifying the berth that vehicles must give all other street users not encased in steel.

A Vision and a Plan

The new bicycle program team (now five staffers, who also work on urban trail and pedestrian projects) prioritized completion of an updated Bicycle Master Plan, adopted by City Council in June 2009. In a city where departments typically shrink from advocating publicly for much of anything ("we can't set policy"), this plan is practically a barn burner.

"Austin has a chance to truly set itself apart; to continue to denote itself as a city that is a positive environmental trend-setter and as a city that looks to the future and values the quality of life that it offers its citizens," it declares with missionary zeal. "Once and for all time, bicycling should be permanently ingrained as a way of life, as a common means of getting around, and as an image of Austin as an efficient and intelligent city." That language reflects the sentiments and years of volunteer citizen work of many on the 100-plus-member Street Smarts Task Force and Bicycle Advisory Council. 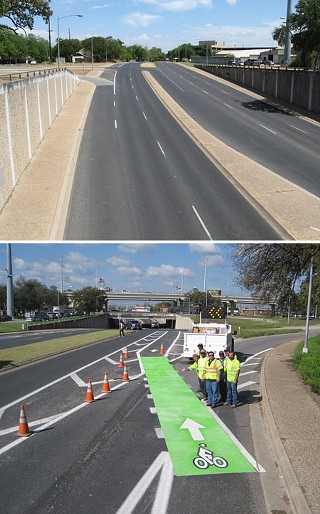 Dean Keeton before (top, facing east) and after (bottom, facing west) it received all new striping, including a green lane to protect cyclists. (Photos courtesy of City of Austin)

As a 10-year strategic plan, it's visionary and ambitious yet pragmatic and results-oriented, which helps explain the rapid increase in bike infrastructure. In support of a big aspirational goal "to transform Austin into a world-class bicycling city," the plan cites a few priorities, supporting goals and objectives, and specific, measurable actions to be completed by benchmark dates. Within its scope are four elements: Bicycle System (the bike lanes, signage, and other physical infrastructure), Education & Promotion, Safety & Enforce­ment, and Implementation & Funding.

In 2007, Austin won recognition from the League of American Bicyclists as a silver level Bicycle Friendly Community, a ranking it has retained. Only 23 U.S. cities met the silver criteria in 2009; in addition, 10 cities ranked as gold and three as platinum (Portland, Ore.; Boulder, Colo.; and Davis, Calif.). The bike program set a goal of moving up to gold for 2010; it's evaluated on a range of exacting criteria, and the new rankings are announced in May. The municipality was also the first U.S. city to be recognized (this year) as a Bicycle Friendly Business, in part for encouraging two-wheeled commuting by employees.

Unfortunately, some of the Bicycle Master Plan's benchmark dates for completing needed system elements (many identified as far back as the 1998 master plan) are far in the future – 2020 and even 2030. That's a function of funding, said Beaudet. The price tag for executing the full inventory of needs cataloged in the Bicycle Master Plan – to complete a system with 750 miles of bicycle lanes, including dedicated off-road paths – is $254 million. (In 2007, for comparison, Seattle updated its bicycle master plan; its price tag for full build-out was $260 million.) 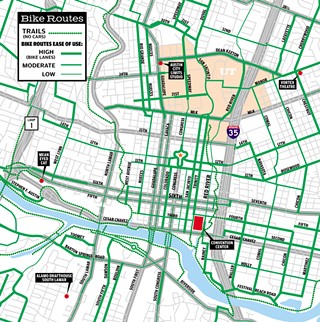 But council has committed no new funds. Projects get funded gradually through approved bond monies and grants by the Transportation Department and Public Works Department. The city spends about $2 million a year for capital projects (new facilities) plus a budget for operations. (For perspective, completing the 6.2-mile Manor Expressway toll road was last estimated at more than $623 million. Full build-out of the city's Sidewalk Master Plan – which does not include Great Streets in Downtown but does include upgrading sidewalk widths on core transit corridors to comply with the city's commercial design standards – is estimated at $824 million.) Mile for mile, bike lanes are the cheapest possible way to expand mobility options. Building new sidewalks on both sides of a street costs a whopping $250,000 to $500,000 per mile. Adding bike lanes on both sides has been running just $10,000 to $15,000 per mile. That's because the city adds them in conjunction with other needed roadway projects – for basically the cost of painting new stripes and bicycle logos.

Indeed, bike advocates think the city doesn't spend enough. Many Austin transportation cyclists advocate that the city should start budgeting for safer (and far more expensive) separated-grade bike lanes, or protected lanes with concrete barriers. (Having used the separated lanes, which are like another sidewalk, in Copenhagen, I can attest that they do indeed feel much safer – the most important factor in getting people to cycle.) But that could take a while; simply making room on the road for painted bike lanes required a major culture shift at the city. Road engineers had to become comfortable narrowing vehicle lanes to 10 or 11 feet, in order to add two 5-foot bicycle lanes on a roadway. (This was recently done on Steck Avenue, for example.) Over the past decade, solid U.S. data supporting thinner lanes and "road diets" has accumulated, said Beaudet. Program staff and University of Texas researchers are now testing driver and cyclist responses to new tools for retrofitting roads – for example, with "sharrows," new arrowlike road markings and signs that indicate how cyclists and drivers can share a lane. She cited work by university researchers nationally, the Congress for the New Urbanism, and others that has led to a whole shift at the federal level toward multimodal "complete streets" requirements and "context-sensitive" design standards. Indeed, the state of Texas became the first state to adopt them into its road engineering standards last year.

Beaudet said the best hope of seeing the Bicycle Master Plan built out on a faster timeline is the city's multimodal Strategic Mobility Plan, currently in development. If bicycling is prioritized as a "growth mode" in that plan and needed projects find their way into a transportation bond package approved by voters in November, Austin's bicycle culture change could shift into higher gear. Given the city's stated goals of lowering its carbon footprint and easing congestion, it makes sense to accelerate Austin's rise as a new bike city.

www.bicycleaustin.info "a website (not an organization) by Michael Bluejay"