The backstory to UT's decision to axe campus institutions 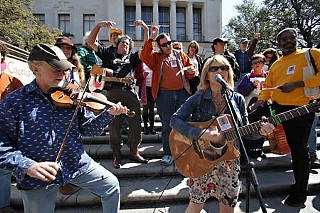 Musician Sara Hickman sings to the choir at last week's campus rally to save the Cactus Cafe. (Photo by Jana Birchum)

If the executives in charge of the Texas Union are to be believed when they say that the Cactus Cafe and the informal classes program lost money for years, then arguably they should be held accountable for financial mismanagement of student resources. One thing they have been very keen to manage precisely was the announcement of the termination of both campus institutions, including keeping the plan secret from students and the Texas Union board until it was a done deal, then handpicking the reporters who would deliver the news. A series of letters and e-mails – obtained and generously made public by The Texas Observer – shows that the plan was fully formed and broadly known by members of the University of Texas administration two months before students were informed of the decision. Here's a timeline of the turn of events.

Dec. 1, 2009: University Unions Executive Direc­tor Andy Smith sends a letter to Student Affairs Vice President Juan González and Dean of Students Soncia Reagins-Lilly informing them of the closure. Smith adds, "There will likely be critical comments from the local media, the most severe, probably from the Austin Chronicle." No students or members of the Texas Union board are included in the discussion.

5:52pm: In response to González's suggestion to transfer either program to Student Affairs, his assistant, Donna Bellinghausen, writes: "Do you really think [Smith] will voluntarily turn over space in his facility to anyone else – even in Student Affairs? You are such a dreamer."

Dec. 3, 2009: González sends Smith a list of questions about the decision. "I do not expect a full throttle thesis response. ... I wanted to further explore options and alternatives."

Dec. 10, 2009: Smith argues strongly against any suggestion of keeping the cafe as anything other than a reservable space and against transferring the classes to another department. As for the proposal to spare one and sacrifice the other, he retorted, "There is no halfway point."

Noon: Acting on Hale's advice, Ochsner sends a revised draft to González, Smith, Reagins-Lilly, and Bellinghausen announcing, "It would be best if Andy served as lead spokesperson, with Juan backing him up."

4:04pm: Ochsner announces that the press release will be issued at 5pm on Friday, Jan. 29, and that Hale has handpicked the news outlets that will receive it – "[higher education reporter] Ralph Haurwitz at the States­man and ... the Daily Texan." The Texan does not print on Saturday or Sunday.

Jan. 28: At 1:56pm, Reagins-Lilly queries Ochsner's request for Smith's and González's cell phone numbers to issue to the press. "Must we be on call? Can they leave a message on their work telephone numbers?"

2:27pm: Ochsner replies, "If we release this to the media on Friday and don't offer a weekend contact then we leave it up to them to find their own sources."

Jan. 29: At 10am, Ochsner circulates a draft press release to González, Smith, Reagins-Lilly, and Bellinghausen.

11am: Ochsner alters the press release to read, "the Texas Union Board of Directors voted" to pass the measure at their meeting (scheduled for later that day).

11:57am: González replies to a series of e-mails between those involved in the closure decision and Director of Development Carolyn Porter about the need to issue contact details to the media. He wrote, "I view very limited privacy for upper management when it comes to communications needs and public affairs responsibilities."

1pm: Texas Union board meets, with no discussion of either program. In closed session, Student Government President Liam O'Rourke and board member Nathan Bunch are informed of the executive closure decision.

3pm: Permanent employees of the cafe and informal classes are informed their current jobs will end in August and they will be offered alternative positions. No attempt is made to contact the 190 contracted class tutors, including the 29 who are current or recent UT employees.

4:15pm: Ochsner edits the press statement, eliminating the reference to the board "voted" and changing the wording to "gave its support" – though, again, there was no discussion by the full board.