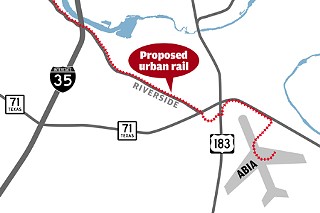 City aims to direct population growth along rail lines, such as the proposed line along East Riverside.

City Council's 7-0 vote on Feb. 25 to adopt the East Riverside Corridor Master Plan was a milestone. Improving this corridor can advance many community goals, including environmental and fiscal sustainability, as well as comprehensive planning for growth. (See "City Hall Hustle," and "The Promise of Planning.") Last Thurs­day, the mayor and council members rebuffed a last-minute recommendation from the Planning Commission to apply the usual compatibility standards (which limit height near houses) in the master plan; that could have gutted the density necessary for the new rail transit line at the heart of the plan. Council members directed instead that a careful study of compatibility should occur in the next phase of work – a detailed "regulating plan" with a new form-based, streetscape-oriented code. Council Member Sheryl Cole emphasized that the city is now committed to rail transit – and with that comes a commitment to directing population growth into denser areas along rail lines.

What East Riverside needs now, to turn vision into reality, is a well-orchestrated public-private investment program. Other than Mueller, Austin hasn't yet been successful in delivering big public-private redevelopments. The city must figure out how to organize and lead a major public-private corridor redevelopment project, sustained over a decade or two. For East Riverside, the next steps include gathering the market data and economic analysis that underlie successful transit-oriented development. (Density bonuses are the only funding mechanism explored in the master plan, and they're insufficient to get the job done.) Both the corridor and urban rail along it need a solid plan for value capture funding (e.g., tax increment financing); general obligation bond funding might get rail across the river, but not along Riverside to the airport in our lifetimes.

What we learn on Riverside can pay off all over town: on Airport Boulevard, where Council Member Chris Riley is championing a similar corridor redevelopment, on the East 11th Street and East Seventh Street corridors where redevelopment efforts have foundered; and on other corridors under consideration by the city's Strategic Mobility Plan team. To break with our history of grand urban plans that underdeliver, Austin needs to try something different.

Here, as usual, we can learn from Portland, Ore. "Development Agreements: Lever­ag­ing Private Investment for Public Good," a chapter in Street Smarts, notes that Portland "has long been the poster city for smart growth, transit and walking, and is applauded for its award-winning urban planning and environmental stewardship. And it didn't happen by accident. Key to Portland's success in all these areas is the ambitious, innovative, and visionary Portland Development Commis­sion (PDC), which has consistently and effectively used development agreements to forge public-private partnerships that achieve ambitious planning goals."

In Austin, the city isn't properly organized and staffed to put such agreements together. It funds and completes plans but doesn't devote sufficient staff, funding, tools, and resources to implement them – imagining that private developers will somehow do it all. By contrast, reports Street Smarts, the PDC has a "staff of 200 professionals with expertise in real estate development, finance, construction, urban planning, project management, economic and community development, architecture, and law." That's the kind of army it takes to "achieve ambitious planning goals."

In conversations about East Riverside with professional planners, community members, new and old urbanists, and city staff at all levels, these key challenges emerged:

• Approach place-making as economic development: The city's Economic Growth and Redevelopment Services Office should partner on the corridor master plans with the Transportation and Planning departments – providing the missing third leg critical to successful transit-oriented development. Since the city is now in the rail transit and TOD business, it needs to also become expert at harnessing the economic engine of place-making. Once the public sector puts economic development, transportation, and land-use/environmental policy together, it can bring in private sector partners to leverage public-private investments. Kevin Johns, former director of economic development for Palm Beach County, Fla., became the new director of EGRSO on Jan. 11. A planner by training, he brings to Austin more than 30 years of experience in urban planning and economic development and knows a TOD from a TIF.

• Pursue federal "liveable/sustainable urbanism" funding: Under the Obama administration, the Department of Housing and Urban Development, the Environmental Protection Agency, and the Department of Transportation are now collaborating to fund "sustainable development" and "sustainable communities" projects. Federal funding increasingly favors projects that combine affordable housing with rail transit, creating density that yields greenhouse-gas reductions – i.e., "catalytic" urban renewal plans. Former state Rep. Mike Krusee, as a national board member of the Congress for the New Urbanism, has been at the table shaping this new direction in Washington D.C.; more than a year ago, while serving on the CAMPO Transit Work­ing Group, he urged the city's Trans­por­ta­tion Department to align its projects with these new federal funding priorities. Austin Urban Rail and the East Riverside Corridor redevelopment could be a perfect fit – but only if Austin shapes and submits its projects properly.

Shelley Poticha – former CEO of Recon­necting America, a leading national advocate for transit-oriented development – is co-leading HUD's new Office of Sustain­able Housing and Communities. (She'll speak here in May at the Envision Central Texas awards luncheon.) That office is seeking input from local planners as it prepares to award an initial $100 million in grants to cities to help them implement plans that marry transportation and land-use reform. Similarly, the EPA has launched pilot grant programs to fund community (re)development centered on transit. Hello! Does anyone in Austin have this on their federal grant-writing radar? 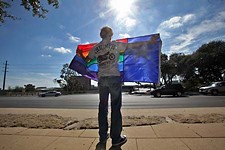