County Court at Law No. 3: Lipscombe Brings It Home 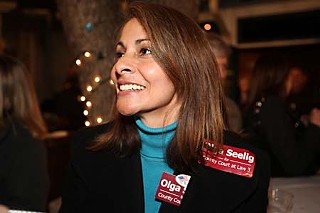 It was nearing 9pm on Tuesday night, and candidate John Lipscombe hadn't yet arrived at his own election party, at an office along the Lawyer's Mile near the county courthouse. His absence left many party attendees – including his wife, retiring county Judge Jan Breland – wondering: "Where the hell is John?" As it turned out, Lipscombe was attending his neighborhood's precinct caucus. "Why wouldn't I be there?" he replied when asked upon arrival. (Incidentally, Breland's bench seat will be assumed by lawyer Brandy Mueller, who ran unopposed in the Dem primary and has not drawn any GOP challenger.)

Still, though he was already pulling roughly 53% of the vote over challenger Olga Seelig (which is exactly where the night ended), Lipscombe was only "cautiously optimistic" about his chances at victory. He'd run a hard race (which turned rather nasty at times, with behind-the-scenes mudslinging dirtying up several online outlets), and Lipscombe was nervous about how it would turn out. Besides, he said, there's more to think about than just election night – assuming the bench and running the court (and being able to implement jail-diversion programs that he really cares about) are actually more pressing, and challenging, concerns. "Winning the race is the easy part," he said.