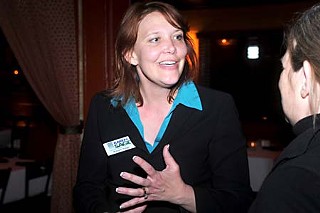 It was all but inevitable: In the race to replace retiring Judge Charlie Baird, Travis County voters will be looking at a run-off between two top vote-getters. With four contenders in the race – defense attorneys Leonard Martinez and Eve Schatel­owitz Alcantar, assistant district attorney-turned-defense attorney Mindy Mont­ford, and Assistant District Attorney Karen Sage – there was little chance any candidate could punch above the 50% needed to capture the race flat. Instead, the two early frontrunners, Montford and Sage, have done exactly what was expected – advancing to round two in the race, to take place April 13. It promises to be an interesting second go: At the end of the evening Tuesday, Montford was ahead of Sage by eight full points, pulling in 45% of the vote to Sage's 37%. What those results will mean going forward remains to be seen. 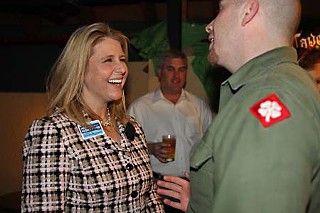 Sage says it means only that she will continue to work hard the base that she's built while on the campaign since June. In that time, she says, her campaign has knocked on some 30,000 doors and she personally has talked to thousands of voters. "We have a strong base of Democratic Party support," she said. And she believes that the many club endorsements she earned during the primary will turn out the vote in the run-off. "If we have to talk to every single voter ... we'll do it." That strategy – block-knocking-and-talking – has been a hallmark of her campaign, she says, and she'll continue to hit hard.

Meanwhile, at Montford's E-night headquarters, supporters were excited by the strong showing their candidate made in the primary – and were sure she would pull through in a run-off. "No one can outrun Mindy," several supporters independently said in conversation. Certainly, Montford enjoys high name ID in this race, which is just one cycle removed from her unsuccessful run for Travis County district attorney. In that race, also with four candidates in the game – and with old-Dem Party favorite Rosemary Lehmberg, the veteran first assistant D.A., among them – Montford also came out of the primary facing a run-off, which she lost to Lehmberg. Sure, Montford may now be facing another go, she says, "but this time I'm not going to lose."

Indeed, how the extended race will play out is unclear: With Sage eight points behind, it wouldn't be surprising if the party's faithful (and likely at least some among Montford's supporters) call on Sage to concede. A run-off is expensive not only for the county but also for candidate supporters. But Sage, at least for now, says she's ready to take her campaign back to the streets to pull out the votes she'll need.