Travis County Commissioner: Gómez Pulls Through for Another Term 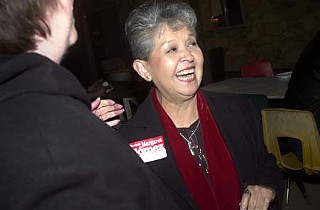 Even with only a trickle of votes counted early Tuesday, Travis County Commissioner Margar­et Gómez was already wearing the look of a candidate who had won the night. She wasn't exuberant, but calm, exhausted, and looking forward to a good night's sleep after narrowly knocking off opponent Raul Alvarez – the only one of Gómez's several challengers over the years who has come close to toppling the 15-year Precinct 4 incumbent.

In the end Gómez, who has drawn opposition in each of her re-election bids, beat Alvarez by 475 votes out of the nearly 6,900 cast at polling places in South Austin neighborhoods and southeast Travis County communities. A hasty glance through a few of the precinct returns reveals an all-over-the-map picture of the race. Alvarez, a former two-term City Council member, carried some polls that have historically gone to Gómez – from the trendy South Congress neighborhoods to more modest precincts in the Govalle neighborhood of East Austin. Perhaps Gómez's camp picked up on Alvarez's momentum in the final days of the election, because that's when Gómez began churning out attack mailers, which may or may not have made the difference in the race.

Gómez said her campaign figured out early on that Alvarez wasn't targeting the older voters who usually turn out for midterm primaries. "Every opponent is different," she said while sitting on a picnic bench outside Rab­bit's Lounge in East Austin, where a music box belted out throaty, old-school Latino numbers reminiscent of the incumbent's younger days. "You have to learn [the opponent's] way of doing things. I figured out where he wasn't [campaigning], and I went there." Alvarez, she went on, "was concentrating on the younger population. But young people didn't have a role in this election," in contrast to the youthful fervor of the 2008 presidential race. "This election was about older voters – and I knew that." She paused to sip from a cold one a supporter set down before her. "It's something you learn over time, knowing your audience."

By about 10pm, a few miles west of Rab­bit's, the Alvarez campaign was winding down what was supposed to have been its victory celebration at El Sol y la Luna. Alvarez stood before a small group of supporters and thanked them for their support. Later, as he bid good night to well-wishers, he tried to assess the evening's turn of events. Running a commissioner's race in a single precinct is much different from running a City Council race, he agreed. He said he's proud of the fact that there were more than 3,000 more voters in this primary than in the 2006 Precinct 4 Democratic primary, when Gómez defended her seat against a noncompetitive challenger. "We ran a hell of a race, and I'm so proud of what we accomplished," he said. He hopes the race sent a message to Gómez that she needs to step up and be a "leader who's more engaged. ... [S]he definitely stepped up in this race. I wish her the best over the next four years."

Then There's This: Biscoe: The Most Popular Guy in Town
Flattery will get you nowhere in the race for interim commish seat