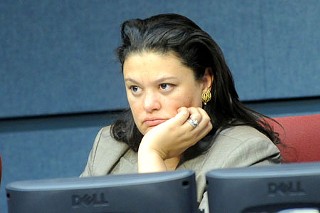 At a board meeting Monday that ended in the rejection of her budget-cutting proposal, AISD Superintendent Meria Carstarphen looks as though she'd rather be back in St. Paul. See "Have Mercy." (Photo by John Anderson)

The Austin Water Utility has broken ground on new "green infrastructure" to reduce the environmental impact of the city's Hornsby Bend Biosolids Management Plant, thanks to receiving $31.8 million in federal funds. The award-winning 1,200-acre plant recycles Austin's sewage and yard trimmings, producing Dillo Dirt compost; it's also home to AWU's Center for Environmental Research, and its ponds attract migrating birds and waterfowl, making it Austin's top birding destination. At the event, Dr. Al Armendariz of the Environ­mental Protection Agency called the plant "a new, innovative solution for an age-old problem. Besides improving the environment by reducing waste, it creates jobs, cuts energy usage, and reduces carbon emissions. Once again, Austin is leading the way for other communities in Texas as well as nationwide." AWU projects that the improvements will yield about 560 local jobs and a carbon footprint reduction of 6,500 tons of greenhouse gases a year (in part by saving 30,000 gallons of diesel fuel). The project will expand plant capacity and increase production of biogas – which new generators will convert to electricity, said AWU, sending up to 1.75 megawatts of electricity to Austin Energy's grid annually. – Katherine Gregor

The Barton Springs/Edwards Aquifer Conser­va­tion District is currently accepting applications for candidates for its board of directors, precincts 2 and 5. Candi­dates must file in person at the district's office, 1124 Regal Row, by 5pm March 8. If a seat is contested, it will be on the May 8 municipal ballot. Directors must live in the precinct that they represent. Get more info by visiting www.bseacd.org or calling 282-8441. – Lee Nichols 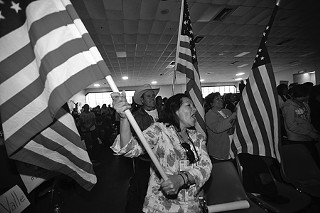 The Manos de Cristo Dental Clinic, which serves low-income Austinites, is asking for your vote to help it win $20,000 in funding from the Tom's of Maine Dental Health for All program. That's enough money to serve another 470 patients – who typically arrive at the clinic in pain, with no other source for affordable dental care. Add your "vote" by watching Manos de Cristo's short video at www.tomsofmaine.com by March 12. According to the clinic, Texas ranks last in the nation for health insurance coverage, last in the percentage of low-income children who are insured, and 48th for access to dental care. Helping Manos de Cristo win the sponsorship is one small way to help improve those dismal numbers. – K.G.

The Austin Climate Protection Program plans to host a community climate change planning charrette March 4-5, to establish an overarching goal for reducing greenhouse-gas emissions in Austin. For inspiration, an ACPP handout states that the cities of Portland, Albuquerque, Berkeley, Chicago, Seattle, and Toronto all have set goals to reduce emissions 80% by 2050. However, as the weak results of the Kyoto Protocol show, such long-term targets are meaningless unless supported by measurable interim goals and action plans. The ACPP and mayor's offices have invited about 100 people, representing diverse sectors of the community, to the City Hall event, which is not open to the general public. They'll develop headlines for Austin as a Green/Sustainable Community in 2050, set a big community greenhouse gas reduction goal (e.g., 80%) and then define how that translates to individual resource areas (energy, land use, transportation, etc.), develop measurable objectives, elect resource area chairs, and determine next steps and immediate action items. They'll reconvene in council chambers March 5, 12:30-1:30pm, to present the outcome; it has yet to be determined whether that portion may be open to the public either. – K.G.

The Texas Attorney General's Office on Feb. 19 sided with the city of Austin, ruling that city officials could withhold from public release documents related to the city's moldering scrap tire heap in Southeast Austin. The Chronicle had requested internal communications about any possible wrongdoing within the city's Fleet Services Division made to City Manager Marc Ott or assistant city attorneys that might show that city officials knew prior to our December report about problems with the city's scrap tire program. Initially, city officials said they knew nothing about problems that led to thousands of tires being abandoned on the southside property, but later they said that releasing the documents we requested would interfere with the city's investigation of any potential crime connected with the scrap tire heap. The city earlier this month collected and properly disposed of the tires abandoned on property leased by Victor Almaguer but said the Austin Police inquiry into the scrap tires is still pending. (For more, see "The Tire Mound of Mystery," Dec. 4, 2009.) – Jordan Smith

Several hundred people from all over Texas gathered at the Travis County Exposition Center Saturday, Feb. 20, to build support for national, comprehensive immigration reform. The Texas Convention for Immigration Integration was sponsored by the Reform Immigration for Texas Alliance, which hopes to "educate Texas elected officials about the need to fix America's broken immigration system." The audience heard from union organizers, public officials, law enforcement officers, religious advocates, and the families of immigrants separated by deportation. For more, see www.reformimmigrationfortexas.org or the Austin Immigrant Rights Coalition, www.austinirc.org. – Michael King

If the environment is a major factor in how you'll vote on March 2, then here's fresh info for you to consider: The League of Conservation Voters has released its annual congressional report card, and as predictably as the sun rising in the east, Democrat Lloyd Doggett rated great while the rest of Austin's delegation – all Republicans – stunk up the joint. On 13 votes that the LCV considered to be of major importance in 2009, Doggett voted the LCV's way 100% of the time. And as per usual, Michael McCaul rated a mere 14%, Lamar Smith 7%, and John Carter a miserable 0%. Your senators are not up for reelection, but of course Kay Bailey Hutchison is attempting to become governor this year. Don't expect her to be too much of an improvement over Rick Perry – she came in at 18% for 2009 on 11 scored votes. As for the other senator, we're stuck with John "Zero Percent" Cornyn until at least 2014. – Lee Nichols

Could Tim Tuggey's challenge to Ken Mercer for State Board of Education District 5 get derailed by the people who most want Mercer gone? Knowing that District 5 is drawn to elect conservatives (it includes northern Bexar County, southern Travis County, and a good chunk of the Hill Country), many progressives may be resigned to replacing the pro-creationism Mercer with a reasonable Republican rather than a Democrat. Mercer used this fact to attack Tuggey, writing on his website that Tuggey "was endorsed by one of the most liberal newspaper editorial boards in America" and "'earned' the support of the Democrat leaning, education political lobby." Tuggey responded by trying to shore up his credentials with the right, declaring that voters needed to "Dump Desperate Deception" (we've heard catchier campaign slogans). Tuggey emphasized that he and his law firm have dumped tons of cash into the GOP, represent the Bexar County GOP pro bono, and represented the Texas GOP in the 2003 re-redistricting fiasco that gave Republic­ans eight more seats on Texas' congressional delegation. Always remember – when driving the GOP primary highway, swerve hard to the right. – Lee Nichols