Once again, the El Paso City Council has denounced the ongoing drug-fueled violence in its sister city, Ciudad Juárez – and, once again, a provision denouncing the nation's war on drugs has been struck from a resolution of support for the beleaguered city south of the border.

After hearing more than two hours of public testimony on Feb. 9, the council voted 6-2 to pass the resolution, but without a controversial passage calling for legalization and government regulation of marijuana. A vote on the original resolution, drafted by council members Beto O'Rourke and Steve Orte­ga, ended in a 4-4 tie before Mayor John Cook weighed in to quash the measure.

This is not the first time that O'Rourke has raised serious questions about the impact of the drug war on the fortunes of Juárez and, by extension, El Paso. Last January, in a similar sister-city resolution, O'Rourke sponsored language that called for a serious national debate – from El Paso to Washington, D.C. – about drug policy and the possibility of legalization. The measure earned the support of a majority of the council but was vetoed by Cook. The move also prompted the El Paso state Lege delegation to pen a letter suggesting that O'Rourke was irresponsible for even suggesting such a discussion, a sentiment echoed by U.S. Rep. Silvestre Reyes. (Notably absent from the El Paso delegation's letter was Sen. Eliot Shapleigh, who strongly disagreed with the position of his colleagues.)

Considering the vehemence of the opposition to the mere suggestion of opening a dialogue about drug policy, it's probably no surprise that the council did not pass the most recent resolution without first excising the offending language suggesting that marijuana be legalized and taxed. But O'Rourke did not make that suggestion lightly. Instead, he told Reefer Madness, "We were very meticulous about documenting this." By the federal government's own estimation, he says, marijuana trafficking to the U.S. accounts for 60% of cartel profits. Take away that source of income, he says, and you severely cripple the cartel operations. "It's a very simple logic that we applied to this," he said. "Stop them from killing and terrorizing with impunity. It's not a magic bullet," but it's a start.

However sound the logic – and, really, however modest the proposal – the language did not make it into the final draft. Still, the resolution is a fairly sternly worded document, calling on Mexican President Felipe Calderón and President Barack Obama to come together in El Paso for a summit discussion "to develop a coordinated strategy to bring an immediate end to the drug violence in our community." The resolution also calls on the government to make specific changes that would ease the woes in Juárez, which, for good or ill, reverberate across El Paso and into the rest of the state. Chief among those changes, says O'Rourke, is the proposal that immigration officials change their standard operating procedure when deporting Mexican nationals. As it stands, he said, when the government deports illegal immigrants – for either basic immigration violations or for criminal violations – they escort the person to "the middle of our international bridge, and leave them there to fend for themselves." That isn't easy – especially for those people who aren't actually from the area. "These are ready recruits for or victims of these cartels," he said. Instead, the government should "repatriate [immigrants] to their state and city of origin."

While those proposals also caught some flak from the public, the council ultimately passed the resolution – but without O'Rourke's vote. Ultimately, he felt that resolution provisions should not be cherry-picked. "The situation really has gotten a lot worse since last year," said O'Rourke. (Indeed; see chart below.) "I will continue to speak out on this." 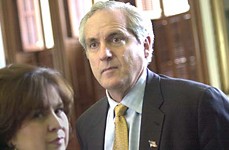