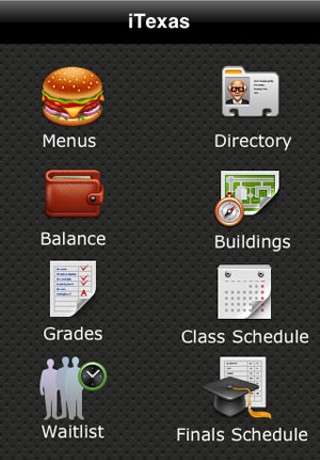 Working in the rapidly advancing field of smart-phone computing, local start-up Mutual Mobile has developed several popular iPhone applications. Finger Tangle, a Twister-like game for your digits, has been downloaded some 200,000 times. Are They Really Single and Stud or Dud cull legal records for background info on prospective partners. Hang Time, an altitude-gauging app that encourages users to throw their iPhones in the air, was named one of PC World's "most idiotic" apps – which, of course, drove more downloads. But attorneys for the University of Texas are paying unwanted attention to one of Mutual Mobile's newest apps, raising questions about the breadth of UT's trademark claims in the process.

The app in question is iTexas, an iPhone app that addresses day-to-day concerns of UT undergrads. Due to university objections, it could get dropped from Apple's app store any minute. "It's a ticking clock," says Tarun Nimmagadda, co-founder of Mutual Mobile.

Nimmagadda has been in this situation before. In late 2009, Mutual launched UT Directory, which made the unwieldy staff and student directories easy to search. The university complained to Apple, and the app was removed. Nimmagadda concedes the company may have overstepped: The burnt-orange color scheme and "UT" in the title gave the app the look of having an official imprimatur it didn't carry. Mutual then released the more ambitious iTexas. A free download, the app retains the searchable directory but also lists menus from different cafeterias across campus, tallies students' dining-card and Bevo Bucks balances, delivers class schedules, shows campus maps, and more. By scrubbing the Longhorn colors and changing the name, Nimmagadda says, they were convinced they'd developed an app with "everything objectionable removed."

Not quite. On Feb. 1, the Mutual team learned that UT had raised another objection to its latest app, specifically to the use of the word "Texas" in the name. "As this name is confusingly similar to the Texas [trademark], UT objects to such use," reads a notice sent to the Apple app store by attorney Wendy Larson. UT's board of regents began trademarking university properties back in 1981. A list of protected trademarks appears on the university Office of Trade­mark Licensing Web page; alongside more specific trademarks such as Bevo and Lady Longhorns is, simply, Texas. The trademarks protect the massive revenues Texas sports merchandise generates; for the fourth year running, UT was the top-selling university brand in fiscal year 2009, according to the Collegiate Licensing Co., which oversees a majority of college teams.

It didn't help Mutual Mobile that on Jan. 5, the day it released iTexas, UT released its own official iPhone app. But the two appear to be truly separate applications serving different needs. While UT's app contains an abundance of sports info and press releases, iTexas is tailored to quotidian student concerns – wait lists for classes, grades, and what's for lunch that day. The standoff has put Mutual – a company practically all composed of UT grads – in an awkward position with its alma mater. Mickey Ristroph, another Mutual co-founder, says, "Until this, I never thought of UT as something other than all of us, all the people who make it."

Larson's complaint asks Apple to "require that the developer rename the application, and ... release the app name to UT." Nimma­gadda says the company will rename iTexas if it's dropped from the app store, although it's a headache. He would have preferred that UT approach them directly so that Mutual Mobile could rename the app near instantly through an update; instead, UT complained to Apple, meaning that Mutual must reapply to Apple and go through a weeks-long approval process. Besides, this not being their first skirmish with the university, Nimmagadda says, "We are a little nervous" that the app ultimately might be rejected for good. "We hope it's not a situation where this is just another arrow in their quiver," he says of UT's trademark claim, "and if we fix this, it's something else. We don't have unlimited resources."