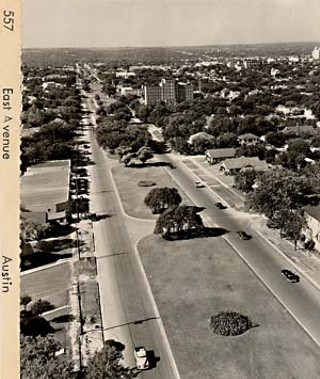 This undated photo, facing south, shows East Avenue before the construction of I-35. The four-lane boulevard was lined with houses on either side (you can also see Brackenridge hospital in the distance on the right) before it was replaced with the highway.

As our 2010 comprehensive planning effort bumps and grinds, it lends perspective to realize that Austin's impulse to do a grand city plan – a brilliant solution for all land-use, transportation, and urban growth issues at once – has been a recurring one for nearly a century now. History shows us that many of Austin's most vexing problems remain remarkably consistent, although fashions in addressing them change.

A 1928 Austin City Council resolution is the oldest on the city's website discussing a comprehensive plan. The needs it discusses are still on our wish list today: better streets and sidewalks, meeting the growing city's demand for water and electricity, and providing the funding to pay for it all. That resolution newly defined the city limits, marking them with metal spikes in the ground. It established our system of zoning, stating that "the City Council shall have power to regulate and restrict the height, number of stories and size of buildings and other structures, the percentage of lot that may be occupied, the size of yards, courts and other open spaces, the density of population, and the location and use of buildings, structures and land for trade, industry, residence or other purposes."

"A City Plan for Austin, Texas," prepared for the City Plan Commission in 1928, most infamously institutionalized racial segregation. It recommended a plan to move "the negro population" east of East Avenue, where I-35 is today. (Council Member Sheryl Cole points to this as an example of the power of a comprehensive plan, for good or ill.) The "Schools" chapter concludes: "It is our recommendation that the nearest approach to the solution of the race segregation problem will be the recommendation of this district [just east of East Avenue and south of the city cemetery] as a negro district; and that all the facilities and conveniences be provided the negroes in this district as an incentive to draw the negro population to this area [italics added]. This will eliminate the necessity of duplication of white and black schools, white and black parks, and other duplicate facilities for this area." More compassionately it added, "We further recommend that the negro schools in this area be provided with ample and adequate playground space and facilities similar to the white schools of the city." The racial barrier created in that plan was later set in concrete, Cole pointed out, when I-35 was constructed beginning in the 1950s and finally completed Downtown in 1962.

Later council resolutions pertaining to a city comprehensive plan were passed in 1950, 1956, 1959, 1961, and 1968. A 1950 resolution, "Adopting a Comprehensive Plan Essential to Achieve Improved Housing Conditions," was spurred by a need for more affordable housing "available to persons and families within the low income brackets of the community." (The more things change ....) It recommended demolition and condemnation of unsafe slums; in their place "five hundred and twenty (520) units of low-rent housing will be constructed." (Wonder what those rent for today?) The 1956 resolution initiated a new plan and program for "urban renewal" to "combat slums and blight." In 1959, the city called for a plan to address the expansion of the state's Capitol complex, which was affecting neighborhoods directly around the Capitol (the homes, obviously, did not survive).

Then in June 1961, the city adopted a whole new comprehensive plan, called the Austin Development Plan. Its familiar "preserve-yet-grow" purpose: "for preserving the unique characteristics and accomplishments with which Austin has already been endowed and for enhancing the future development of the city." It was to be revised annually, to inform each year's Capital Improvements Program (a goal being brought forward again now); it contained maps for a "Thoroughfare Plan," "Land Use," and "Public Facilities."

In 1968, council adopted a Comprehensive Plan for the Development of Town Lake, in response to "a vital need for the expansion of public outdoor recreational facilities." Then, starting in 1972, council has taken some sort of action related to comprehensive planning or plan updates nearly every year. In 1973, it established the Planning Commission, by City Charter, to work on a new comp plan. Four years later, in 1977, council adopted the first parts of the Austin Tomorrow Comprehensive Plan (Resolution No. 770512-4); the last elements were adopted in 1979 (Resolution No. 790215-21) and distributed to the public in book form in 1980. An addendum to the 2009 interim update of Austin Tomorrow notes of its original adoption: "This approval followed nearly a decade of intense deliberations by the citizens of Austin regarding critical choices facing the future of the Austin region. ... Some were excited about the prospect of the Austin Region growing into a premier metropolitan area that offered unparalleled cultural and economic opportunities. Others were concerned that sprawling development patterns lacked identity and were threatening Austin's sense of community, stunning natural environment, and fiscal viability."

That plan set forth policies and strategies that have shaped the Austin we know today. While much never came to fruition, the interim update notes that because of that plan, a "series of ordinances and initiatives implemented in the decades of the 1980s and 1990s resulted in greater protection of water quality, endangered species, and other environmental resources. Other initiatives were designed to strengthen neighborhoods, direct growth into desired development zones, promote a greater mixture of land uses, revitalize downtown, provide affordable housing, and foster development patterns friendly to transit, walking, and bicycling."

Five years after the first plan elements were adopted, a 1982 article from Third Coast reported that while the development community didn't take the Austin Tomorrow process seriously or get much involved, "to the developers' surprise, the comprehensive plan didn't fade away, but has dogged their steps ever since." The story continues: "'A lot of people now regret that they didn't participate,' says [real estate attorney David] Armbrust. 'I guess I did not attach to it the importance that has been attached to it over the years. The city has all sorts of plans that just sit on the shelf – they're just kind of lofty ideal. But this has become the bible.'" (Disengaged developers, business owners, and major employers of 2010, take note.)

The community began work on creating a new comprehensive plan about five years later. But the ill-fated mid-Eighties Austin Plan ran afoul of politics and divisiveness; the bruising process dragged out so long that by the time it was finally brought back to council, council's makeup and policy sentiments had changed. Consensus cratered, and the Austin Plan was never adopted – to the dismay of those who had worked on it long and hard. Rather than wade into a contentious new comprehensive plan process, the city finally decided in the mid-1990s to do neighborhood planning instead. So the Austin Tomorrow Plan began accumulating amendments with completed neighborhood plans in 1998-99. More than a decade later, many neighborhoods still don't have an adopted plan, although most do.

In 2006, the city auditor strongly recommended that the city begin a new comprehensive planning process, as specified in the City Charter. But City Manager Toby Futrell was no fan of comprehensive planning. Only after she became a lame duck did council approve a resolution, in December 2007, directing the city manager to prepare an interim update to the Austin Tomorrow Comprehensive Plan and directing the city manager and Planning Commission "to study alternative approaches to long range planning for the greater Austin region." (See "The Bigger Picture," Jan. 11, 2008.) Council and staff made it clear that the interim update was only a clean-up, not a new plan. The interim update removed obsolete policies and replaced them with existing adopted policies; it also updated all of the maps included in the plan and integrated and summarized city plans and initiatives undertaken in the three decades between 1977 and 2007. (But it didn't incorporate unofficial planning efforts, most notably Envision Central Texas' plan for regional growth and the Planning Commission's 2035 Sustainable City Initiative of 1997-98 – both of which recommended new growth be directed into dense nodes.)

In 2008, council formally adopted the interim update as an amendment to the Austin Tomorrow Plan. The long list of added policies, initiatives, and ordinances, adopted or initiated since 1979, attests to the city's ongoing impulse to plan – if not always to implement, fund, and complete the improvements that plans prioritize. A review of the list could also prompt one to consider how best to connect the dots, now, on all these disconnected plans. Highlights include:

What lessons can we draw from Austin's comprehensive-planning history? First, the need for both patience and perseverance – with less drama over the details. Second, the need to translate plans into funded projects. It would be fascinating to see an audit of Austin's completion rate, on all projects recommended in the last three decades of doing individual urban plans and neighborhood plans; it's a safe guess the percentage is low. So we might also ask elected officials to take a solemn oath – on Austin's stack of dusty, aspirational, unfunded plans – that when our new comprehensive plan is adopted, it will be backed (as the City Charter requires) by the funding and resources to implement it. To borrow from a real-estate truism: Implement, implement, implement.