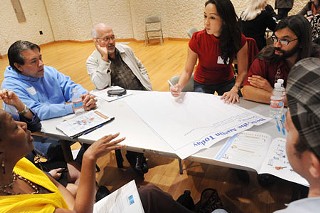 The Comprehensive Plan Citizens Advis­ory Task Force group has been slow to gel – in part because council kept adding members to ensure representative diversity, in part because its exact role and powers haven't been clarified. But at its Jan. 26 meeting – the fifth in four months of existence – the volunteer group finally began making progress on a road map for Austin's future.

The task force is stocked with smart, active people who are frustrated that they aren't being better used. "We need assignments!" begged Greg Esparza at the Jan. 12 meeting. "We aren't getting the full benefit of all the brain power in this room," another objected. Members asked tough questions of the consultants and staff, nailing weaknesses in the outreach plan – especially the lack of quantifiable goals.

At the December task force meeting, members had pushed back and the mood turned contentious after John Fernsler, a principal with consultancy Wallace Roberts & Todd, directed the group to start work on a vision statement – members objected that too little of the community input was yet available. City Manager Marc Ott observed the troubling dynamic in the room; afterward, he took steps to give the whole comprehensive planning process more executive-team support by addressing gaps in communication, organization, and structure. Assistant City Manager Sue Edwards is now tasked with smoothing the way (see "Imagining Austin," Jan. 29).

At the Jan. 12 meeting (with Edwards in attendance), more tensions surfaced. The task force received good data from city staff and WRT on the demographics of public participation. They heard that more than 1,200 responses had come in to date. (That number is now higher; the survey remains online through March 1 at www.imagineaustin.net.) A graphic showed how participants compare to the overall demographic makeup of Austin; member Mark Lind commented, "We're doing really well with well-educated whites in the inner city, but we're not doing that well with everyone else." Staff said they are taking steps so that overall input roughly matches the demographics of Austin, citing as an example a well-attended Meeting in a Box at the Asian American Cultural Center. But members weren't satisfied. "Time is so critical now. There's a sense of urgency that we need to get them involved," said Ora Houston, of low-income African-Americans and other underrepresented groups. "There needs to be work done in between monthly meetings."

A goal of this phase of work is crafting a vision statement; a draft is currently scheduled to go to the Planning Com­mission and City Council for adoption in late March. Council's charge to the task force included: articulating Austin's common values, championing the plan to encourage broad-based citizen participation, serving as a conduit for community concerns, and helping to craft the vision and consensus. But members remain confounded by basic procedural issues. What actions can they take between meetings? How can they make progress as a group? Serving as chair is former Travis County Dis­trict Court Judge Margaret Cooper, reportedly tapped as a respected neutral party. But a number of members and observers said she isn't proving the right facilitator of meaningful action.

At the Jan. 12 meeting, Cooper raised hackles by presiding more like a judge than a chair. Members found themselves constrained by the downside of the Open Meetings Act – which legally governs the city's designated "task forces" and prohibits members from talking or e-mailing with one another, except at publicly posted meetings, if a quorum (or even a "walking quorum") might occur. Yet members have been charged by council with serving as "ambassadors" to the community and with collaborating to find common ground; as Regina Rogoff, Mark Yznaga, and others pointed out, that's a difficult role to play if you can't all communicate or creatively devise action plans at monthly meetings.

"This is a process, and to cut it off and stifle it is putting a rein on us," one member objected to Cooper, after city legal presented a long warning on Open Meetings Act restrictions. "Why not be creative? We're a brainstorming group." Cooper seemed most comfortable enforcing points of law under Open Meetings Act rules, thereby making certain the group took no actions not posted on the agenda. As the evening wore on, frustrations erupted. "I don't think the City Council intended us to be hamstrung from accomplishing anything," protested Rogoff. "It's 'Imagine Austin!'" she commented later. "How can you imagine anything if you can't talk about anything unless it's posted on the agenda?"

Cooper was unable to move the large group through the agenda in the allotted two hours; that necessitated adding the Jan. 26 meeting. By then, thanks in part to interventions by Edwards (and much huddling by concerned council members), the tenor had improved. Members were briefed on the Community Inventory – a 400-page data book on all things Austin – and its preliminary planning implications (see www.imagineaustin.net/inventory.htm). In a show of support, all three members of the relevant City Council subcommittee attended – Chair Sheryl Cole, Laura Morrison, and Chris Riley – as did Mayor Lee Leffingwell and Bill Spelman. Afterward, Ott and Edwards both noted with satisfaction that task force members broke into a smile when they finally took a first action – voting to empower a newly formed outreach committee, chaired by Perla Cavazos, for that purpose and more specifically the second community forum.

"The council is aware that there are concerns regarding several issues surrounding the comp plan," said Cole. "We want to respond quickly by taking up the issues at the next subcommittee meeting [Feb. 1], including how the Open Meetings Act is affecting the task force. At the end of the day, it's not council's plan; it's Austin's plan for years to come."

The risk now is that the task force – rich in community activists but weak on the business community – will become mired in questions of public participation rather than tackling the central planning problems. "I think the challenge is to realize that, as worthwhile as public participation is, it's a part of planning, but it isn't in itself planning," commented member Frederick Steiner, who is dean of the University of Texas School of Architecture and a nationally respected planner. "We need to move ahead to address some of the really important issues that the comprehensive plan can help address. For example, in all of the forums I've been involved in so far, transportation has come up as a major issue. That will require quite a bit of very careful analysis. We also have issues of clean air, clean water, and so much more. ... If you direct growth in a certain area, what are the trade-offs? Congestion, where do the new people go, the issues of preservation of neighborhoods and density – those are the big issues for me."