State of the City, Now and Beyond

Mayor Lee Leffing­well (r) delivered his state of the city speech to a sold-out audience at a Real Estate Council of Austin luncheon on Feb. 2. While he didn't mention the city's comprehensive planning effort by name, he signaled its importance in noting that "an Austinite born today will almost certainly live in a city of nearly 1.5 million people – and a metropolitan area of well over 4 million people – by the time he or she is 40. I believe wholeheartedly that our most basic responsibility as citizens of this special city should be to that future Austinite." He also sent a strong message on direction. After citing the long list of recent "best city" rankings calling attention to Austin's economy, Leffingwell urged the development community to protect the city's future economy and quality of life by supporting its long-term efforts: the water conservation plan, the climate protection plan, the Austin Energy generation plan, and the Strategic Mobility Plan (funded by an anticipated November bond referendum to include urban rail). "The question for Austin is not whether we will grow," said Leffingwell. "The question for Austin is how we will grow." Leffingwell also announced that he's convening a "mayor's summit on small business" to occur in late March, to explore new ways to support small local businesses. Read the full text of Leffingwell's speech. – Katherine Gregor 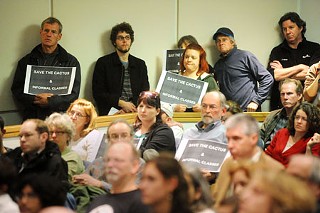 The threat of losing the beloved Cactus Cafe and the long-running informal classes program to budget cuts drew a packed house of opponents Tuesday to the University of Texas campus. See "'A' Is for Axed," p.18. (Photo by John Anderson)

Remember all the details of the East Riverside Corridor Master Plan? Well, neither does City Council – which could be adopting the plan Feb. 25. To refresh everyone's memory (it's been three years since the original council resolution and two since council selected a consultant), lead planner Tony Nelessen is flying into town to give a 25-minute briefing to council Thursday, Feb. 11, at 10:30am. The plan will have gone to the Planning Commission Feb. 9. Thanks to city departmental "silos," this Planning and Development Review Department effort isn't yet fully synced up with the Transport­ation Department's Strategic Mobility Plan. Both are working on transit-oriented development for the same corridor, but from two different perspectives. As has been noted in previous coverage (see "New Urbanism Comes to East Riverside," July 3, 2009), "the draft master plan hinges on the premise that rail transit will run down Riverside Drive, between I-35 and Ben White, and on out to the airport. Leveraging the transformational powers of transit-oriented development, the corridor plan shows East Riverside losing its car focus (e.g., a blur of parking lots and strip shopping centers) in favor of a people focus (attractive places to walk, recreate, eat, shop, and live)." Initial work on the Strategic Mobility Plan also goes to council Feb. 25. Look for an attentive council member or planning commissioner to suggest that the two departments create an East Riverside transit-oriented development plan more collaboratively. – K.G.