A closer look at the Downtown bike boulevard proposals Just to be clear: The city of Austin has no confirmed plan for creating a "bicycle boulevard" on Nueces Street between Third Street and Martin Luther King Boulevard. The city is officially still in the public input stages and insists "nothing is set in stone." Rather, the detailed plan you see on these pages is the product of the League of Bicycling Voters. The city wants to transform this ordinary-looking stretch of Nueces into a destination for bicyclists. (Photo by Jana Birchum)

Clarity is definitely needed in the proposal to turn Nueces into a bike boulevard, as fearful property owners and other interested parties along Nueces don't seem to be entirely certain what is being proposed. For starters, even the term "bicycle boulevard," by the city's own admission, might conjure up images of a street off-limits to automobiles, which is not at all the case.

One thing is certain: The proposal is generating heavy interest, judging by the packed houses at Pease Elementary in December (see "A Boulevard for Cyclists ... and Cars," Dec. 18, 2009) and January.

The Arguments for Nueces: On the south end, an easy right turn connects directly to the Lance Armstrong Bikeway via this bridge (Photo by Jana Birchum)

We'll try to offer some clarity here, too, with these illustrations, some debunking, and a dash of opinion.

What is being proposed: A way to make bicycles a higher priority on Nueces, creating an avenue through the west side of Downtown that 1) is safer than some other streets, 2) is inviting to cyclists of all ability levels, and 3) connects with the Lance Armstrong Bikeway – all while still allowing automobile traffic. Some property and business owners, and some cyclists, assert that Rio Grande would be a better street for the boulevard, and the city has said planners will explore that option as well.

Devil's in the Details

The Arguments for Nueces: Rio Grande dead-ends at Shoal Creek, which would require another bridge to be built or signage directing cyclists around the block to the existing bridge. (Photo by Jana Birchum)

Not much seems to have changed between the December and January meetings. The city clearly wants this to happen (although Public Works officials insist that "no boulevard" is still an option). So does a large and vocal contingent of bicyclists, as the property and business owners make equally vocal arguments against it while trying to emphasize they are not against making the city friendly to cyclists.

The city is trying to mediate its way between those positions with a 10-member stakeholder group composed of property owners, city staff (including Bicycle Program Manager Annick Beaudet), and representatives of the Downtown Austin Alliance, Pease Elementary, Austin Community College, and the League of Bicycling Voters.

The Arguments for Nueces: The difference in grade between Nueces (pictured) and Rio Grande is evident. (Photo by Jana Birchum)

The city hired traffic engineer Heidi Ross to conduct a traffic impact study of the area. Ross announced at the January workshop that she will be looking at three scenarios: 1) no-build (leaving the street as-is), 2) short-term implementation (what will happen in the first six months), and 3) long-term (how traffic might look after redevelopment of the area has occurred, in both the Downtown area and West Campus).

Traffic impact is the major concern of property owners. As recounted in the previous article, one business owner, Bat City Awards and Apparel owner Trey Bueché, worries that his new business at 18th and Nueces will be threatened if auto traffic is discouraged and argued that the area between 15th and MLK is "primarily a commercial district." Bueché is partly right: The property there is heavily commercial, and the plan would discourage autos. But it's important to note the type of commercial: The only retail I spotted on my own survey of the four-block stretch was (not counting the Jimmy John's sandwich shop and Taco Cabana facing MLK) Bat City, Tiff's Treats (a cookie bakery), and a salon. Otherwise, as Beaudet said, the businesses tend to be law firms and other "appointment-oriented" businesses, adding, "This is not a retail corridor in any way."

Property owner Susan Harris asserts that that same segment of Nueces is ripe for exactly the type of high-rise redevelopment sought by the city to increase Downtown population density, because it's one of the few areas not in a Capitol view corridor – and she believes that restricting auto traffic will discourage this development.

The League of Bicycling Voters, in its very detailed plan for the corridor (www.lobv.org/2010/01/nueces), counters that developers understand that Downtown Austinites desire multimodal transportation, including bikes, and that in any case, such future development is speculative: "City planners also note that current zoning does not provide for any significant 'high-rise' or intense residential development on a large scale." Beaudet said that preserving on-street parking is "a priority." 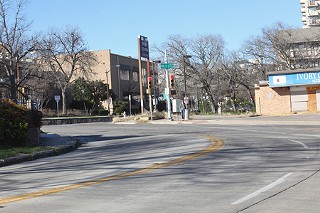 The Argument for a Rio Grande Bike Boulevard Instead: Rio Grande (pictured) has a direct connection into West Campus, albeit only for northbound traffic. Taking Nueces north forces a brief jog west in MLK’s bike lanes up to Rio Grande. (Photo by Jana Birchum)

Other criticisms raised are that public safety will be endangered and that fire, police, and the Travis County Sheriff's Office are opposed. The city's official line is that the Austin Police Department and the Austin Fire Department are on board with the proposal as long as access for emergency services is not hampered. As for the TCSO, property owner Scott Sayers said at the January meeting that he was aware of a letter from Sheriff Greg Hamilton to APD Chief Art Acevedo opposing the boulevard for fear of potential effects on the inloading of suspects at the Travis County Jail – part of the Downtown criminal justice center for which Nueces acts as the western border.

That's only partially right. Hamilton showed me the letter and said he simply has "concerns" – some of which had been based on inaccurate information. Hamilton based his letter on a Statesman story that said traffic-blocking bollards might be part of the traffic-calming mix, which Baudet flatly denies. He also believed that part of the proposal is to make Nueces one-way (it's not). However, it is true that the project seeks to "slow down or impede vehicular traffic."

It's hard to guess how much of the LOBV plan might make it into the final product. Negotiations over the Lance Armstrong Bikeway a few years ago left it as something less than the smooth, contiguous ride across Downtown that bike advocates had hoped for, and compromises could produce similar results here. Assertions by the LOBV (and the city) that the boulevard would actually increase property values and attract more business are hard to quantify beyond the anecdotal, as no truly solid studies exist. (But then, the same could be said of claims that it will kill businesses.)

On other claims, though, this reporter at least partially agrees with LOBV's assertion that "Rio Grande is not a viable option." It might be viable, but it's definitely the poorer choice. I retract a claim in my earlier story that Rio Grande's incline "is not much more severe than Nueces" – after taking a reride, I'd say it's not much more severe for me, but if attracting cyclists of all ages and abilities is a major goal, then Rio Grande could certainly pose a significant challenge for your average 7-year-old or older folks unaccustomed to higher grades.

One argument made in favor of Rio Grande is that it directly connects across MLK, which Nueces does not. However, the recent addition of bike lanes on MLK makes that transition a lot simpler, and besides, Rio Grande's direct connection only applies to northbound traffic.

On the south end, the argument tilts toward Nueces because it has almost a direct connection to the Lance Armstrong Bikeway bridge over Shoal Creek (one need only turn right on Third Street, and there you are). A connection from Rio Grande would either require another bridge over Shoal Creek (expensive and thus unlikely) or signage directing bikers around the Fourth/Nueces/Third block to the existing bridge. Simpler is better.

I'd also agree with the LOBV's rejection of arguments that there is something wrong with giving preference to the bicycle, as if it would be some sort of discrimination. "We find this stance rather absurd, since the vast majority of streets and developments overall already are planned to give preference to the automobile," reads the report. Or, as one woman at the January meeting put it: "You have all the other streets to drive on. Why can't we have just one to bike on?"

The city's final meeting to discuss the boulevard will be held on Feb. 24, and like the previous meetings, at Pease Elementary, at 6pm.

For more info on the project, go to www.cityofaustin.org/bicycle. 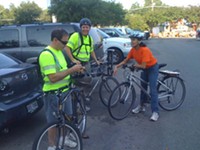