Tweet
print
write a letter
On Tuesday, the Travis County Commis­sion­ers Court voted 3-2 to approve the site development permits for Texas Industries' embattled Hornsby Bend sand and gravel mining project near Webberville – with Com­mis­sioners Ron Davis and Karen Huber dissenting. The vote apparently clears the way for TXI to prepare the roadway improvements (under a separately approved agreement with the county) that would eventually support sand and gravel mining on nearly 2,000 acres, in a project opposed by many local residents.

The vote had been postponed at the Jan. 12 Commissioners Court meeting after the Fort Worth office of the U.S. Army Corps of Engineers, alerted by a resident of Austin's Colony, said it wanted to meet with TXI and review the project for potential Corps jurisdiction under the U.S. Clean Water Act. On Jan. 21, Stephen Brooks of the USACE wrote TXI: "[W]e have determined this project will not involve activities subject to the requirements of Section 404 [of the Clean Water Act] or Section 10 [of the Rivers and Harbors Act, governing navigable waters]. Therefore, it will not require Department of the Army authorization." Brooks said the decision was based on project documents provided by TXI, other available information, and "field reconnaissance conducted by USACE personnel January 20, 2010."

At its Jan. 12 meeting (see "Point Austin," Jan. 15), commissioners said they were surprised by the Corps' intervention, because previous county requests for review concerning similar projects had been summarily rebuffed. But Ryan Metz, an environmental consultant who lives near the proposed site, contacted the Corps directly and told the commissioners he believed TXI's own documents reflected at least one tributary of Gilleland Creek that should fall under federal environmental jurisdiction. This week, Metz called the Corps' decision "disappointing to say the least" and said that he was told that Corps personnel concluded "the tributary in question would be classified as a 'grass-lined swale,' and as such, would not be considered waters of the United States." (The county's agreement with TXI covers roadway improvements necessary to transport the aggregate to the company's processing plant, but according to Corps personnel, any permit review concerning the roadway work would not include the mining itself.)

"We are not giving up," said Metz via e-mail, "but this new development certainly hurts our community's cause. ... We hope that an unspoken revelator is out there waiting for the most opportunistic time to come forward." 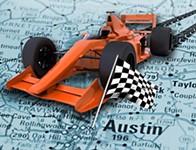