City Shells Out for Quintana 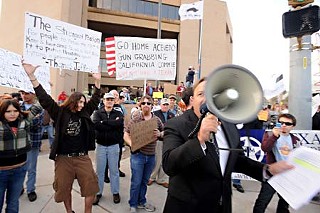 Hundreds of gun-rights activists rallied Monday at the Austin Police Department in response to recent law enforcement actions that led to the shutdown of a gun show scheduled Jan. 16-17. Local gadfly and conspiracy theorist Alex Jones is shown with bullhorn in foreground. (Photo by John Anderson)

According to the agenda posted for the Feb. 4 City Council meeting, members will authorize another $250,000 for legal services to defend Austin Police Officer Leonardo Quintana in the federal civil suit filed by the family of slain 18-year-old Nathaniel Sanders II. The city has hired outside counsel Robert Icenhauer-Ramirez to handle the lawsuit filed by attorney Adam Loewy on the family's behalf. Icenhauer-Ramirez has defended the city in similar suits in the past, including in the defense of two officers involved in the notorious 1995 Cedar Avenue Valentine's Day melee and, more recently, for APD Officer Julie Schroeder, who was terminated in 2005 for the shooting death of Daniel Rocha. The city's original contract with Icenhauer-Ramirez was for $50,000, but council will now consider increasing the total to $300,000 in order to pay for "anticipated fees and expenses," including the hiring of experts. The money will come from the city's Liability Reserve Fund. – Jordan Smith

A request from the state may see the University of Texas at Austin looking to find $29 million in savings on top of the $31.1 million it needs to find to cover critical priorities (see "Running the UT Numbers," Dec. 18, 2009). On Jan. 15, Gov. Rick Perry, Lt. Gov. David Dewhurst, and House Speaker Joe Straus gave all state agencies one month to present plans to cut 5% of their general revenue and dedicated general revenue fund expenditures over the 2010-2011 biennium. The request does not require any reduction in eligibility and essential staff for several of the state's biggest expenditures such as Medicaid and the Children's Health Insurance Pro­gram. With those funds protected, that means that the state is actually looking for close to $1.6 billion in savings, or 1% of its total biennial budget. UT Chief Financial Officer Kevin Hegarty said it's still unclear whether these are one-time costs or whether the 5% is a statewide goal or target each agency must reach. With less than three weeks to go before the submission deadline, he said, "We hope to have greater clarity on this matter within a week's time." – Richard Whittaker

Perry, Palin, What a pair! 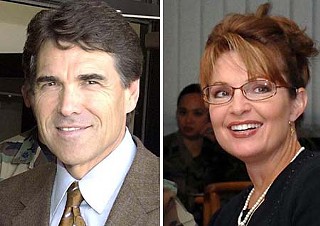 The Dallas Cowboys have crashed out of the NFL championship, but Texans still have something to do on Super Bowl Sunday as Gov. Goodhair and the newest Fox News talking head share a stage. Gov. Rick Perry has announced that Fox News contributor and failed vice presidential candidate Sarah Palin will be stumping for his re-election in Houston on Feb. 7. Details of the event are yet to be confirmed, but if the governor is thinking about cutting into game time, he better have some big-screen TVs on hand. It will be interesting to see if the same Republicans who called for MSNBC host Ed Schultz to quit his media job when he was approached to run for North Dakota's senate seat will at least ask for Palin to drop her employer's "fair and balanced" label since Perry called her "a true conservative leader." – R.W.