Texas out of the race 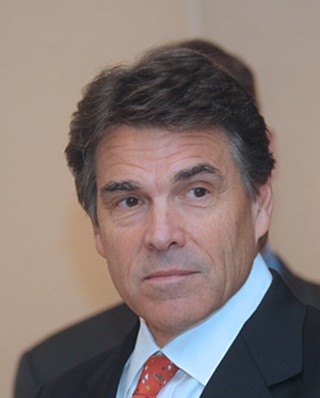 While legislatures and school districts in other states rush to comply with the application terms of the federal Race to the Top grant, Gov. Rick Perry is continuing his ongoing feud with the Obama administration by refusing to submit the state's application – despite months of preparation by the Texas Education Agency. Perry's political opponents call his decision to reject a projected $700 million misguided; on the other hand, educator groups that opposed the application are concerned that Perry rejected the cash for the wrong reasons.

The competitive grants are funded out of the American Recovery and Reinvestment Act, better known as the federal stimulus fund. Prior to Perry's decision, there was a total of $4.3 billion available nationally, and this week President Barack Obama added another $1.35 billion for the next financial year. Susan Patterson, Austin Independent School District's ARRA Title 1 Part A grant coordinator, explained, "The Race to the Top money was an opportunity that came down from the federal level to the state, and it had to be applied for from the governor's office." Because Texas stayed out of nationwide collaborative programs that would add points to the application, there was an increasing consensus that even if it were submitted, Texas' proposal would have been among the weakest.

However, just as Perry rejected $555 million in unemployment insurance cash but took the other $16 billion on offer, his decision to junk this application does not mean that Texas education gets no economic stimulus cash. AISD has already received $23 million in Title 1 ARRA money for campuses with economically disadvantaged students and $17 million for programs covered by the Individuals With Disabil­i­ties Education Act. In addition, Patterson said: "We are going to be pursuing an Investing in Innovation grant. This is a large competitive grant that is nothing to do with the state or the TEA and is really about scaling up and implementing very well-researched and proven effective practices in education."

Even with those applications pending, House Higher Education Committee member Rep. Donna Howard, D-Austin, criticized Perry and Education Commissioner Robert Scott for denying districts the Race to the Top cash. She said: "I'm disappointed, for sure. ... These funds were for innovation, which a lot of superintendents were asking for." She also criticized their decision to portray collaborative programs like the Common Core State Standards Initiative as steps toward a national curriculum, rather than becoming actively involved in their definition. U.S. Education Secretary Arne Duncan has said that the standards would never be mandatory in any case, but Howard argued that Texas should still work with other states. She said, "Even if we have been the leader, which we have been in a lot of areas, that doesn't happen in a vacuum."

In his Jan. 13 statement backing Perry's decision to cancel the application, Scott said, "We've had enough. We've had enough top-down management. We've had enough bureaucratic speak and dictating what's going on in our schools." But that's a reversal of Scott's original position. On March 2, 2009, he testified to the House Select Committee on Federal Economic Stabilization Funding that, while as a state employee he was technically neutral on the ARRA, "I'm encouraged about this because these are the things we've been working on for the last few years," such as college and career readiness, charter schools, and incentive pay. As for any supposed strings attached, he told the committee that the compliance terms of the initial round of stabilization funds were a positive component and called it "money trying to drive behavior. ... This is focused on some really high goals." Committee Chairman Jim Dunnam, D-Waco, recalled that "throughout the spring, virtually every time TEA Commis­sion­er Robert Scott came to testify in front of my committee, he talked about Race to the Top. It's hard to understand why, after the TEA spent 800 hours preparing the application, Perry wouldn't even bother to send it in."

Perry and Scott do have the nominal support of two of the state's largest teachers' unions. Both the Texas Classroom Teachers Association and the Texas chapter of American Federation of Teachers opposed the application because they believe Race to the Top places too much emphasis on testing and punishing teachers. They argued that the proposed standards would take the state back to the punitive state accountability standards in place before the Legislature passed House Bill 3 in 2009. Still, Texas AFT President Linda Bridges discounted Perry's concerns about the Common Core Standards Initiative and said common national standards for writing and mathematics could be agreed upon easily. Her members' biggest concern was that by publicly opposing the application, they might be perceived as backing all of Perry's criticisms. She said, "We discussed it long and hard."

One of Perry's concerns that's widely echoed is about what will happen in 2011, when ARRA funds run out. However, AISD is working to make sure it doesn't fall off what Patterson called "the funding cliff." She said: "In two years, we'll have really good evidence about what works and what doesn't, so we can roll it into our local budget or sustain funding through other avenues. That's been comforting for me."