Precinct 4: It's Good to Be the Incumbent

Challenging an incumbent is a tough job, but somebody's gotta do it Longtime incumbents may suffer the slings and arrows of angry constituents, but they often prove to be formidable fixtures during an election year. Just ask Raul Alvarez, who by now – some six weeks before the March 2 primary – had hoped to have acquired more political traction in his effort to unseat Precinct 4 Travis County Commissioner Margaret Gómez, who has served on the commissioners court since 1995.

Gómez has already picked up endorsements from a number of influential and well-financed public safety unions. Alvarez, a former two-term City Council member and current trustee on the Austin Community College board, had been rumored to be a likely winner in the Central Labor Council's candidate screening process last weekend. But the CLC – the umbrella group of the Austin AFL-CIO – took a pass on endorsing in the Precinct 4 race, based in part on recent polling results that raised doubts about Alvarez's ability to topple Gómez in the Democratic primary. 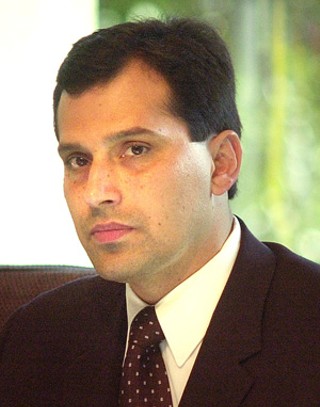 The nonendorsement, however, clears the way for the two dozen or so member affiliates to make their own endorsements, so labor-friendly Alvarez is likely to pick up support from individual unions – possibly including the one that represents Capital Metro employees, who were often at odds with Gómez during her tenure on the transit agency board, where she most recently served as chair. While the Central Labor Council endorsed Gómez in previous elections, the group's nonendorsement this time around can still be viewed as a positive for the incumbent, said political consultant David Butts, who is supporting Gómez but is not currently employed by her campaign. The CLC "recognized that Raul has to swim a lot harder if he wants to get there," Butts said of Alvarez's slow campaign start. Still, Butts allowed that Alvarez is an experienced campaigner who has demonstrated his greatest strengths at the grassroots level. Additionally, his support list carries strong whiffs of his old City Hall stomping grounds, with high-profile backers such as former Mayor Will Wynn, who hosted a fundraiser for Alvarez, and former Mayor Pro Tem Betty Dunkerley mixed in among several prominent environmental activists. Precinct 4 includes parts of Downtown, South Austin – including key boxes in the 78704 ZIP code – and southeast Austin.

On the Democratic club circuit, Gómez picked up the South Austin Democrats' endorsement Tuesday night in a close contest following a candidates forum at the Gardner Betts Juvenile Center. SAD was the first Dem group to kick off the rounds of club endorsements before early voting begins Feb. 16. Gómez, a lifelong resident of South Austin, delivered her remarks in the confident, measured tone of an incumbent who's spent most of her adult life on the campaign trail. She focused on her accomplishments while Alvarez honed in on work that still needs to be done. If county commissioners are going to be making decisions about landfills, he told the crowd, they should also be crafting zero-waste road maps for the future.