Does the Open Meetings Act Go Too Far?

Tweet
print
write a letter
The Texas Open Meetings Act was designed to blow the doors open on backroom dealing in smoke-filled rooms. Yet four cities, including Pflugerville, are challenging sections of the law. On Dec. 14, 2009, they filed suit in the Federal Western Dis­trict Court in Pecos against the state and Attorney General Greg Abbott. The law, they argued, has been perverted by a long series of legal opinions and legislative tweaks, and it now restricts free speech by making officeholders afraid to talk to each other outside of announced meetings. Attorney Dick DeGuerin, representing the cities, said this was not a challenge to the original intention of the bill, but, he added, "What we do want is for elected representatives to be able to speak out in public on what their positions are."

Under the act, any quorate meeting of any governmental body at which that body's business is discussed must be publicly announced at least 72 hours in advance with a full agenda. But under current interpretation, a meeting can include an exchange of e-mails or a telephone call or even the odd concept of a rolling or walking quorum, where a series of disconnected conversations can equate to a quorum. Floyd Akers, city attorney for Pflugerville, argued that the law disproportionately affects smaller entities, such as city councils in small towns, where a quorum may only require two or three people. For example, three members of the five-member Pflugerville City Council attend the same church. Akers said: "If they go to the 11 o'clock service, they've just committed a criminal violation that they can be prosecuted for. And god forbid that they be asked to speak, because that's a whole other violation."

Abbott's office, which has yet to formally respond to the suit, has called it an attempt to subvert open government and added that "the First Amendment is furthered, not frustrated, by open meeting laws." Yet the Texas Municipal League, which supports the cities in their case, has argued that the law has a chilling effect and that, while rare, indictments do happen: Pflugerville Council Member Victor Gonzales was investigated* for simply answering a question about council business at a fundraiser, and this latest suit is a refiling of an earlier claim by Alpine Council Members Avinash Rangra and Katie Elms-Lawrence, who were indicted for an exchange of e-mails. While no charges were filed against Gonzales and the Alpine indictments were dismissed, the legal challenge failed because the council members were term-limited out of office and no longer had standing. However, Akers said he hoped that the Pecos court will act on the U.S. 5th Circuit's finding that the "criminal provisions of [the act] are content-based regulations of speech."

*[Editor's note: In the original version of this article we wrote that Victor Gonzales was prosecuted for a TOMA violation and that the suit was dismissed. In fact, though Gonzales was the subject of a complaint, he was not indicted. After an investigation, the complaint was dismissed in Williamson County as being without merit.] 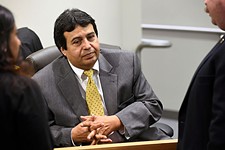