Tweet
print
write a letter
• A South Austin man was fatally shot at his home Monday after an Austin Police Department officer and a Travis County sheriff's deputy, responding to a domestic disturbance call, opened fire on Roger Tyrone James, the father of four children. Police say James pointed a handgun at APD Officer Justin Berry and Sheriff's Deputy Theodore Ramsey; both have been placed on administrative leave pending an investigation. 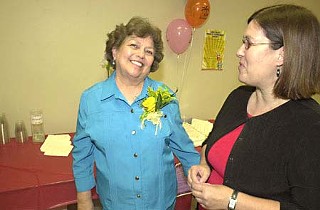 • Emma Barrientos (above left), an arts and social justice advocate and wife of retired Austin Sen. Gonzalo Barrientos, died unexpectedly Monday after a brief illness. A behind-the-scenes player in a number of Democratic political campaigns, Barrientos, 67, led the push for the city's Mexican American Cultural Center and served as a founding board member of the Mexic-Arte Museum. See "Res Publica" for details on services.

• New Year's Eve is upon us, and Downtown revelers should note the city's (scaled-down) First Night festivities mean several street closures. Visit www.cityofaustin.org/specialevents for more details. And if you're driving, don't drink ... and if you're drinking, don't drive. See "Res Publica" for driving alternatives.

• Speaking of driving while impaired, the city's new ban on texting while driving – which also prohibits using any mobile apps while you're moving – goes into effect Jan. 1. Police will allow a 30-day grace period for citations, with suspected violators receiving warnings instead of fines.

• City Council doesn't meet again until Jan. 14. The meeting is the first since new notification rules from Mayor Lee Leffingwell took effect, meaning the council agenda will be publicly posted nearly two weeks in advance (as opposed to less than a week, previously).

• After pressure from investors, controversial Whole Foods Market CEO John Mackey has announced that he will be relinquishing his role as chairman of the Austin-based company's board of directors. CtW Investment Group, a shareholder advocacy group dealing in union pension funds, had previously called him "a liability" to the firm because of his attacks on health care reform.

• Another Austin institution bids farewell. The Ski Shores Waterfront Cafe, a Lake Austin burger and live music joint, is closing its doors after many decades. Owners George and Dianne Levy notified patrons and friends of the closing in a mass e-mail Tuesday, signing off, "Goodbye to all, good health and god speed." • Rep. Elliott Naishtat, D-Austin, became the last member of the Travis County legislative delegation to file for re-election when he submitted his paperwork on Dec. 23, 2009. Filing for the March 2 primaries closes at 6pm on Jan. 4.

• Former White House counsel and loyal Bushie Karl Rove has been granted a divorce from his wife, Darby, after 24 years of marriage. Family spokesperson and former White House press secretary Dana Perino told Politico.com that it was a mutual decision. Rove, whose autobiography is due out in March, is rumored to be heading back on the Texas campaign trail. • Je t'aime: Embarrassment for U.S. Rep. Pete Sessions after The Miami Herald uncovered an e-mail from the Republican Texas congressman to banker Allen Stanford that said, "I love you and believe in you," sent seven hours after the U.S. Securities and Exchange Commission charged the financier with defrauding investors of $7 billion.

• Democrats are scrambling to find a candidate for the 10th Congressional District after front-runner Jack McDonald unexpectedly dropped out. The 2008 Democratic nominee, attorney Larry Joe Doherty, said he is considering another shot at incumbent GOPer Mike McCaul.