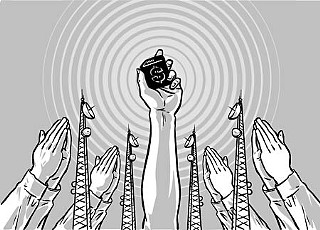 The recent flurry of format changes and frequency juggling by local radio stations was only the first round of what is sure to be a tumultuous year for the industry. The foundation of the business – the Arbitron ratings system – is changing, prompting Austin stations to rethink every aspect of their programming.

Next summer Arbitron will begin using electronic devices called Portable People Meters to measure the listening audience in Austin, instead of the current diary system. In markets where Arbitron is already using PPMs, there have been dramatic shifts in the station rankings. For example, in several markets, Spanish-language and urban hip-hop stations have plummeted, while oldies and generic hits-oriented music stations jumped in the ratings.

PPMs also played a role in Emmis Com­mun­i­cations' decision to drop its hip-hop format, Hot 93.3FM, and move KGSR, its signature Austin "adult album alternative" station, from 107.1FM to 93.3FM, a much stronger signal with greater reach in sprawling Williamson County. It was a risky move, as evidenced by the complaints on online message boards about spotty reception in Central and South Austin. But management believes the move will better position KGSR for the future.

"No question, we have [PPMs] in the back of our minds with what we do," said Scott Gillmore, Austin market manager for Emmis.

The portable meters, which look like pagers, are carried by participants and automatically pick up and track encoded radio signals – all radio signals. If a person with a meter is standing in a store or elevator listening to background music, the meter will take note, in the same way it will track a user flipping through stations in their car.

PPMs' ability to record every channel-surfing moment is a sharp contrast to the diary system, which requires participants to write down the stations they listen to in the course of a day. Although Arbitron goes to great lengths to make the diary system statistically relevant, the wild fluctuations and questionable accuracy are widely mocked within the industry. People filling out diaries, industry executives believe, often simply vote for their favorite stations instead of diligently listing their minute-by-minute listening.

The meters, most industry executives acknowledge, offer a far more accurate picture of listening habits. But the system has been controversial from the start. Ethnic groups say they are underrepresented in Arbitron's panels of listeners, skewing the results. Spanish-language giant Univision is refusing to participate. Earlier this month, the U.S. House of Represent­a­tives Committee on Oversight and Govern­ment Reform held hearings on the impact and accuracy of the electronic data system.

On a station level, managers are wrestling with how to program for a PPM world. The meters tend to reward stations that play catchy, popular songs capable of grabbing the attention of a broad audience flipping through channels. In early PPM markets, the estimated audiences for oldies and generic all-hits music formats like Bob FM, which broadcasts nationally and in Canada, have soared. In response, after years without an oldies format in Austin, Border Media last month replaced the Mexican pop format on KXXS-FM with a syndicated "True Oldies" format.

Stations that play mass appeal hits "end up rising to the top because they are no one's favorite station, but they are everyone's second or third favorite station," said Seattle-based consultant Chris Mays. "In the Seat­tle market, the Jack station [an all-hits format like "Bob"] was always an also-ran in the diary, never in the Top 10, and now it zoomed right to the top."

Mays specializes in so-called "triple A" adult album alternative stations like KGSR, which have not fared well in many PPM markets. PPM results, she says, are pushing many program directors to replace artists like Lyle Lovett and John Hiatt with more "broad appeal" hits from the likes of Journey or Steve Miller, hoping to catch a larger classic rock hits audience. KGSR is seen as "one of the stations in jeopardy" because it doesn't play a generic song list, Mays says.

In general, PPMs punish stations with more creative formats, as the meters diligently record every time a restless audience changes the channel. Early results show that long interviews or chatty talk hosts can drive away listeners. A comedic deejay may be popular in the diaries, but if the meters record 10% of the audience switching to find the next song, it can be devastating to a station's ratings.

Stations "have to be crisp, concise, and compelling," said Charlie Silsen, a partner in Research Director Inc., which tracks the industry. "If they are not compelling, the listener goes away."

Emmis managers have already talked to on-air personalities about tightening up their shows, Gillmore says. "If you're doing unprepared, undisciplined things, you'd be better off playing a song," Gillmore said. He emphasized that management won't try to "reinvent" established shows like Dudley & Bob on KLBJ-FM or The Jeff Ward Show on KLBJ-AM. But there can be a fine line between "creativity and self-indulgence," he notes.

It's not hard to envision what might happen in Austin. Already conservative and rigidly formatted stations will retreat further into their shells, slashing even more personality and on-air talent, turning into characterless automated jukeboxes, sticking to broad appeal, PPM-friendly music formats. In the diary world, stations needed to be memorable in order to prod Arbitron panelists to write down the station's call letters in the diary; under PPM, stations need only to play a hit song to grab a listener's attention for two minutes.

"The more disturbing fallout from this is that it reinforces all the philosophies that have made radio a bland afterthought," industry veteran Steve Allan recently told a reporter for an industry newsletter.

PPM results have varied market to market, making it difficult for local executives to predict the initial impact. Stations will begin encoding their signals in January for the PPM system, and there will be a test period before the system goes live, giving programmers a chance to evaluate the results.

"I do think it's more real" than the diary system, Gillmore said. "It's more reflective of what people are doing in the real world." 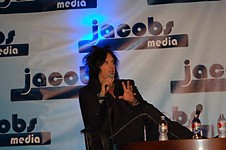 Nix to Negativity
Crisis? What crisis? Have some candy. 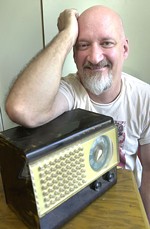