HANDS ON WHEEL, EYES ON ROAD

An expanded ban on texting while driving passed the City Council Dec. 17 – come the new year, texting, e-mailing, or using any other mobile applications will be illegal behind the wheel. A new measure, sponsored by Council Members Laura Morrison and Chris Riley, expands on a previous resolution that prohibited texting but didn't address use of mobile online apps popularized by the iPhone and other smart phones. Violations will be punished by a $500 fine. "All of us can see what happens almost every day due to erratic driving behavior that's directly attributable to someone distracted on the cell phone or some other electronic device," said Mayor Lee Leffingwell. However, council did propose revisiting the ban language and enforcement questions in the future, beginning with a review in six months. – Wells Dunbar

With just less than two weeks left to file for a slot in the March primaries, applications continue to arrive with few big surprises. The big announcement was former Travis County District Attorney Ronnie Earle's entrance into the Democratic lieutenant governor race: Along with rumors that former Texas AFL-CIO Executive Vice President Linda Chavez-Thompson is considering a run, the question now is whether Austin deli owner Marc Katz will actually file or not. In the agriculture commissioner race, the primary between former gubernatorial candidates Kinky Friedman and Hank Gilbert became official. That may disappoint Republican Land Commissioner Jerry Patterson, who had invited Kinky to challenge him. In local House races, sportscaster Dan Neil became the first Republican challenger to Rep. Donna Howard, D-Austin. – Richard Whittaker

Former Travis County Sheriff Terry Keel is the Texas Facilities Commission's surprise pick as the agency's executive director, in charge of managing and maintaining 134 state-owned buildings and 1,100 lease agreements. The seven-member commission (two appointed by the lieutenant governor and five by the governor) was broadly expected to make interim Chief Thomas Forrest's position permanent. But rather than going with the former assistant director of transportation, planning, and sustainability for the city of Austin, the commission instead opted for the ex-criminal prosecutor and five-term state rep – last seen around the Capitol in 2007, when embattled Speaker Tom Craddick tapped him as his parliamentarian. Keel's new appointment doesn't take effect until Dec. 31, but the agency website already reflects the change and notes that Forrest remains deputy executive director for operations. – R.W.

If you're still looking for a last-minute Christmas gift, the Breast Cancer Resource Centers of Texas has held a series of signing sessions to promote its new Art Bra 2010 fundraising calendar. Inspired by similar projects around the country, the center receives bras customized and donated by local artists and celebrities (supporters include musician Patrice Pike and actor Matthew McConaughey). The difference is that the calendar uses real cancer survivors as models. Barbara Formichelli, the center's director of marketing and events development, explained that it can be a real boost for women recovering from cancer treatment and surgery. She said, "Here's a beautiful opportunity for her to be made up by professionals, get all dolled up, put on a bra, and to be on a runway as a fashion model." The garments from this year's calendar were auctioned off in April for the Pink Ribbon Cowgirls network for younger cancer survivors, and all proceeds from the calendar go to the center. Organizers are working on a date and location for next year's auction (Blondie frontwoman Debbie Harry is already working on her next bra), but until then, fans of charitable undergarments can find the calendar at local stores and online at www.bcrconline.org. – R.W.

WE ARE THE CHAMPIONS 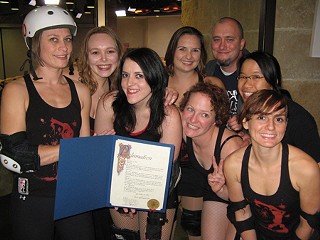 For dedicated fans of flat-track Roller Derby, every day is Derby day, but Mayor Lee Leffing­well made it official by proclaiming Dec. 18 as Texas Rollergirls Day. Calling the Austin-based league "the driving force behind the revival of the Roller Derby movement," he issued the proclamation Dec. 17 to mark that their travel team, the Texecutioners, took the silver award at this year's Women's Flat Track Derby Association national championships in Philadelphia (see "Electric Skaterland," Sports, Nov. 27). The team is reigning champion of the WFTDA South Central region.

Leffingwell also accepted an offer to blow the whistle at the opening bout of the 2010 home season, scheduled for Feb. 28 at Playland Skate Center, adding, "I'll be privileged and honored, if you promise not to run me down." See video of the ceremony at austinchronicle.com/chroncast.