A Boulevard for Cyclists ... and Cars

Nueces Street could become the street of choice for Downtown cyclists 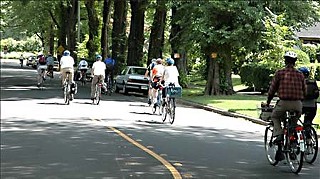 A bicycle boulevard in Portland, Ore. (Photo courtesy of City of Austin)

If things work out the way city officials envision, bicyclists traveling north and south through the western side of Downtown will have a smooth ride. But based on an initial (and well-attended) public discussion last week, getting to that point will be anything but. While there didn't seem to be a lot of hardened opposition to the proposed Nueces Street Bicycle Boulevard project, there was passionate discussion and disagreement over how it might affect area businesses, whether stakeholders were being adequately included, and even whether it ought to actually be on Nueces.

The plan envisioned by the city would use a variety of traffic-calming tools to make Nueces a bicycle-friendly route for getting through that side of Downtown. It would not, planners emphasize, ban automobiles from Nueces, although it would discourage through traffic, create a bicycle "atmosphere," and "allow motor vehicles and bicycles to mix easily and safely," according to a sheet of frequently asked questions distributed at the meeting held at Pease Elementary.

"The bicycle boulevard concept is fairly new," says city of Austin Bicycle & Pedestrian Program Project Manager Annick C. Beau­det, and she admits that "unfortunately, the name could lead people who don't live and breathe this business to believe that it's only for bicycles, and that's not the case. It's basically traffic calming, and everybody in Austin can understand what neighborhood traffic calming is.

"We're recognizing that Nueces already has a very diverse modal split, meaning that it has upward of 7 to 8 percent bicycle traffic during the peak hour, and many buses, many pedestrians, and it does have motor vehicle traffic, but less than the average throughout the city."

Beaudet presented to the community the "toolbox" of traffic-calming devices that might be used to create traffic calming with "a bicycle flavor," including medians, signage, street markings, partial auto "diverters," "green streets" (vegetation incorporated into the street design, slowing traffic), and "pinch points" (narrowed areas that force cars to slow while allowing bikes to pass on the outside). The design would not include auto-blocking bollards, Beaudet told the Chronicle, and she said a recent Statesman article claiming that it might was inaccurate.

Several business owners showed up to express concerns that decreased traffic flow might hurt them, although they also emphasized they are not anti-bicycle. Some were concerned about the small segment from 15th Street to MLK. Susan Harris of real estate company Site Solutions Inc. says the quadrant is prime for the type of mixed-use redevelopment also desired by the city for Downtown, particularly since it is not in a Capitol view corridor. "The real-time reality of increased density," she said, "is that it will bring increased vehicular traffic to all the roads within the quadrant. It is my opinion that the elimination of roadway lanes on a significant commercial collector street in this quadrant to accommodate cyclists will hamper future redevelopment in the area."

"We're at the corner of 18th and Nueces, and we just moved in about six months ago; we purchased a building primarily because of the high volume of traffic between 15th Street and MLK, and the fact that it was primarily a commercial district," says Trey Bueché, owner of Bat City Awards and Apparel, which produces trophies, shirts, and other types of promotional products. "Obviously, one of our biggest problems with the plan is the fact that they plan to deter traffic on Nueces, even though it's predominantly established as commercial property, as opposed to some alternatives where there might be more residential usage."

Indeed, the business owners and some cyclists who showed up to express support of the boulevard concept found some common ground on the "alternatives" – many cyclists echoed Bueché's contention that Rio Grande Street, one block to the west, would serve the desired outcome better.

While traffic-dependent retail businesses on Nueces are certainly the minority – "this is not a retail corridor in any way," says Beau­det, and mostly the street is occupied by "appointment-oriented" businesses, especially law firms – there's even less retail on Rio Grande and substantially more residential use, especially close to the UT campus. Also, Rio Grande has Pease Elementary and Austin Community College, which may both benefit from a traffic-calming project.

Beaudet says that the grade of incline on Nueces was a heavy factor in leaning toward it as a bike boulevard, something she says is a big plus in encouraging cyclists of all experience levels to use it. (My own ride up Rio Grande found that its incline is not much more severe than Nueces, but admittedly, I'm a pretty experienced cyclist.)

Beaudet emphasizes that nothing is set in stone. The city's main desire is just for some sort of north-south connectivity into the Lance Armstrong Bikeway, which either street could provide, and "the city is completely open to using Rio Grande," she said, or perhaps some sort of Nueces/Rio Grande hybrid. "We want to find a solution for everyone."

The business owners are anxious to know what that may be. "There's just not enough bicycle usage to make up for the amount of automobile usage that will be lost when you deter traffic," says Bueché, worrying that his young business could get killed in its infancy. "We're not against increased bicycling usage in the Downtown sector, but it cannot be at the expense of the automobiles."

Bueché and the rest of the community will get more chances to weigh in on the proposal in January: The city will hold another discussion and design charrette on Wednesday, Jan. 13, and a design presentation and final commenting period Jan. 27. Both events will be held 6-8pm at Pease Elementary, 1106 Rio Grande.