Toward a greener future 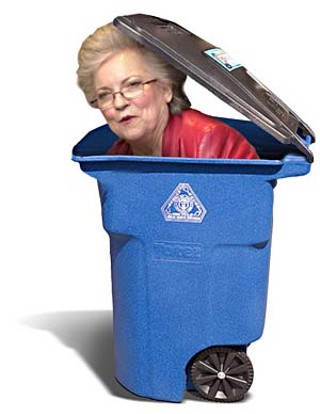 For a city that regards itself as environmentally conscious, Austin's recycling policies often lack coherence. Now the City Council is poised to make three important decisions that would add direction, infrastructure, and leadership to the issue: selecting a new director for Solid Waste Services, renegotiating the existing recycling contract with Greenstar North America, and building the city's own materials recovery facility, or MRF.

First up is hiring a new Solid Waste Ser­vices boss. Six months ago, longtime department chief Willie Rhodes was moved to head up Code Compliance (see "Beside the Point," June 5) and Assistant Director Tammie Williamson became his interim replacement. On Nov. 5, the city released a short list of potential permanent replacements, all from outside of Austin and all with strong backgrounds in recycling policy and innovation (see "Austin's Next Garbage Czar?," below). Mayor Lee Leffingwell said he expected City Manager Marc Ott to confirm a final selection before the end of January and possibly before the end of the year. As for the city's decision to look outside of Austin for a replacement, Leffingwell said, "We need to get someone with a different viewpoint, someone from outside of Solid Waste Services."

On arrival, the new director faces the ongoing recycling debate. Since 2008, Austin has contracted with Greenstar to sort recyclables collected in the big blue single-stream bins and sell them: After deducting preagreed costs, the city and Greenstar split the revenue. When the international recycling market collapsed last year, wholesale prices dropped below processing costs, so Austin now owes Greenstar roughly $2.3 million in fees. However, Leffingwell argued that the overall program still succeeded by increasing recycling by 50%, and, he said, "We didn't lose money overall because we saved so much money by shifting to single-stream." (The savings came primarily from reduced transport costs from running fewer collection trucks.)

With the Greenstar contract expiring in October 2010, the city opened discussions in August for an extension (see "The Greenstar Contract," below), with three options of varying lengths and fee cuts on the table. These new negotiations mark the return of a familiar face to City Hall: former mayor and former mayoral-candidate-turned-registered-lobbyist Carole Keeton Strayhorn. She's representing Greenstar, and, according to Solid Waste Advisory Commission Chair Gerard Acuna, the commissioners only became aware of the progress of the negotiations when Strayhorn e-mailed them Nov. 15 to push for the longest possible extension. In her e-mail, she asked SWAC "to urge [council] to initiate discussion on the original Greenstar proposal [the longest option] if it is not offered for consideration by staff."

Acuna said he's concerned that this is a rerun of 2008, when, he said, "we weren't privy to the negotiations. We were just presented with a one-page document that said the city was going to make $3 million." He argued that if council had allowed them due diligence, then SWAC could have critiqued the deal to verify those numbers. He explained, "If you're being assessed $70 a ton for processing the fiber component and $90 a ton for rigid beverage containers, the markets would have to be absolutely phenomenal" to turn a profit.

Under Greenstar's longest-running proposal, the company would continue to provide services through 2013, making the contract as long as its original bid, which the city rejected in 2008. Leffingwell said he had met with his SWAC appointee, Vice Chair Rick Cofer, and they are "in agreement that we don't want to go for a long-term extension" since the city only needs coverage "while we're building a MRF of our own."

That leaves the third big pending decision – building that local MRF. The city originally hired infrastructure consultants R.W. Beck Inc. to start working on designs and permitting for a local MRF in 2007, to come online with single-stream collection last year. That plan collapsed in confusion (see "Solid Waste: Who's Driving the Train?," Nov. 21, 2008), so Leffingwell said he's treating this new MRF as an overdue priority. On Nov. 16, the city issued an open-ended request for proposals for "dynamic, creative recycling solutions that contribute towards the City's climate protection plan and zero-waste initiative," including a MRF. There will be a preproposal meeting in council chambers on Dec. 4 and a Jan. 5, 2010, submission deadline, with a final decision scheduled for June 2010 (see details at www.cityofaustin.org/sws/mrf.htm). Greenstar Chief Operating Officer Dennis Soriano confirmed that his firm will submit a proposal, as well as seek a contract extension. Considering all the delays, no one is holding their breath for a quick completion, and Greenstar is building a safety net into the proposed extensions. Soriano said, "If any of these options run out and the MRF is not ready, they would have the option to extend for an additional six months on the same terms and conditions."

Acuna called this whole process "our opportunity to right the ship," but he remains concerned about signing a new contract with Greenstar and closing submissions on the MRF before the new director is fully in office. He said the short-listed candidates "all come from communities that have already initiated a public and/or private single-stream facility. So I think we should step back, hire them, then hire someone to work with Solid Waste Services to put out the most incredible RFP possible."

The short-listed candidates vying to become the next director of Solid Waste Services:

On Oct. 1, 2008, the city of Austin shifted to single-stream recycling but did not have the specialized materials recovery facility required for the sorting operations. Anticipating this need, the city signed a revenue-sharing deal on June 4, 2008, with Vista Fibers (now Greenstar North America) to sort and sell Austin's recyclable trash. The contract expires Oct. 1, 2010, but as Austin is unlikely to have its own MRF in place by then, staff is evaluating a contract extension for a council decision as early as Dec. 17.

One reason Greenstar would like a longer-term contract is that the company recently completed construction of a new MRF in San Antonio, which its chief operations officer, Dennis Sori­ano, described as the sixth largest and most technically advanced recycling-sorting operation in the U.S. The additional infrastructure required to deal with Austin's recyclables cost Greenstar around $2.75 million in all. Soriano explained, "We have to depreciate that additional capital expense over the life of the contract." The longer the contract, the more Greenstar can spread out repaying that fixed cost, the lower the fees. The counterargument is that the contract is only supposed to be a stopgap until the city gets its own MRF.

Currently, the city pays Greenstar a processing fee of $70 per ton for containers (cans, plastic, etc.); $90 per ton for fiber (paper, cardboard), which is supposed to be more than covered by the wholesale market value; and $90 per ton for glass and residual waste, which have no resale value.

The city has three options on the table:

A) Extend the contract to take 100% of the city's recyclables through the end of September 2011, with a drop in processing fees of $5 per ton.

B) Extend the contract through September 2011, with Greenstar collecting 100% of the city's recyclables for the first six months and at least 50% for the rest of the contract if the city has its MRF onstream, with a fee cut of $3.50 per ton.