Council wades into the conservation wetlands

Tweet
print
write a letter
The Hustle's obviously a fan of broad humor – and props don't come any more obvious than the one wheeled into City Council chambers last week.

Austin Water Utility Director Greg Meszaros, there to deliver an update on the utility's water conservation programs, brought with him to the podium a symbol of all that's right and wrong with the utility's conservation efforts – a shiny new toilet, comically "concealed" by a light sheet betraying its every shape and form before the big reveal.

The porcelain god was a recurrent theme throughout the day – as was Meszaros at the podium – for in this soggy session, nearly every aspect of city water use was addressed. A code amendment passed promoting the use of rain runoff for parking-lot landscaping, thereby cutting dependence on potable water. A $32 million contract with Missouri-based SAK/Quest Joint Venture to expand Downtown's main wastewater tunnel was postponed, in view of a lawsuit from Fairfax Tunnel Partners, which also bid on the project. (The suit was tossed out Monday, but may be refiled.) Even two contracts wrangling the hydra-headed beast called Water Treatment Plant No. 4 came up for a vote. (Both passed – an engineering oversight measure unanimously, and an actual construction contract 5-2. Previous WTP4 holdouts Chris Riley and Laura Morrison went nay again, while former WTP4 opponent Bill Spelman, attempting to "acknowledge the inevitable," voted yes, saying "My job now is to try and bring it in on time and with as low a budget as possible.")

However, the full court flush that day swirled back to toilets, and the question of whether the utility is doing the best possible job in its conservation efforts. Meszaros began the flow with his update on the utility's conservation measures and the aforementioned toilet reveal – on World Toilet Day, no less – but it soon became apparent council desired more hard and fast guidelines of effectiveness on conservation measures: "bang for the buck," in Spelmanian parlance. "Toilets have the advantage of being easy to count," he said, while requesting a more holistic picture of the utility's efforts.

The topic turned to the Water Conservation Task Force's measures, and Meszaros said he strove to act on them as council direction, "saluting" them. Spelman, laughing, responded, "Much as I love obeisance and saluting, Greg, if you think we were wrong, we need to hear it," whether it be "scaling these things too high, too low, [if] we're asking too much, too little from you ... I would like to hear about it." (From the line of questioning, however, the danger of the utility doing too much seemed remote at best – a concern shared by speakers such as the Save Our Springs Alliance's Bill Bunch, who argued more water could be saved by targeting high-use toilets at bars and restaurants instead of apartments.) Mayor Lee Leffingwell further codified Spelman's request as a "direction from council" to Meszaros that "savings in terms of MGD [millions of gallons a day] and the cost associated with the recommendation" be attached to future AWU presentations.

The cascade continued that afternoon with Item 5, which allocated $3 million in new rebate funds (largely for low-flow toilets) plus $500,000 to implement future recommendations from the Citizens Water Conservation Implementation Task Force and another $500,000 to beef up conservation outreach efforts by adding three new full-time positions. The rebate program has been so successful that approximately $2 million in toilet rebates – $200 a pop, destined for apartment/multifamily installation – are already spoken for, and with other rebate programs and future demand, the money is needed. Council, recognizing the program's popularity but desiring to stretch the dollars and confirm that pesky MGD, appropriated the $3 million but held the other $1 million in abeyance. "I'd like to see an outreach plan before we see those dollars spent on staff or anything else," said Randi Shade, who offered the substitute motion. "I want them earmarked, but not spent."

Following some additional discussion, Shade's motion passed. But the feeling on the dais was that lots of work remained to optimize conservation efforts – and the city's cash. "Earlier in the day, I was convinced that this was the best use of $3 million for water conservation," said Spelman. "After hearing the presentation and the discussion right now, I am no longer nearly as convinced as I was that this is the best use," he said – but citing the program's commitments, voted aye. "I hope, however, we don't have this conversation next year, or in a few months, because if we had an integrated water management program ... we would actually know what the least-cost alternative was, we'd know where we're getting the most bang for the buck, and the question I have – what's the best use of $3 million – wouldn't come up, because we would all know what that is." 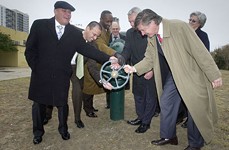 Pressure Rising at the Water Utility
One manager forced out, another accused of harassment ... who's watching the valves?