Some Guy Named Schieffer Drops Out of Guv's Race 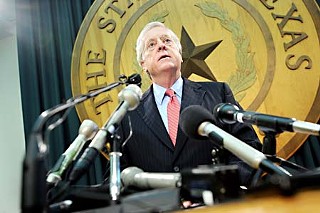 This week's big state House news was supposed to be the unveiling of the new Capitol ornament for the holidays. However, former Ambassador Tom Schieffer overshadowed that event and threw the 2010 elections into an uproar Monday by announcing he was ending his bid to be Democratic nominee for governor and asking Houston mayor and U.S. Senate hopeful Bill White to run instead. White's answer? Check back after Thanksgiving.

In the Speaker's Committee Room, Schieffer told the press he had met with White the day before to discuss his withdrawal. Admitting that his own campaign was stalling for lack of funds, he praised the Houston mayor as the best possible candidate. However, White is currently running for the Democratic nomination for U.S. Sen. Kay Bailey Hutchison's Senate seat, against former State Comptroller John Sharp. Schieffer said, "I told [White] that I thought our state was facing a crisis of leadership and if we did not have a new governor, Texas could wind up being a Third World state."

The Republican Senate hunt was thrown into confusion after Hutchison's recent announcement that, while she is continuing her challenge to Gov. Rick Perry, she will not resign her federal seat until after the March governor's primary. But Democratic activists are quietly enthusiastic about Schieffer's announcement, which could avoid an expensive campaign bloodbath between Sharp and White. While Schieffer said he had not talked with Sharp, he praised him, saying if White does switch races: "We have a good Democrat in the Senate race and we get a good Democrat in the governor's race. It will have worked out fine."

White quickly issued a statement. "I agree to consider running for governor, and shall make a decision by Friday, Decem­ber 4th." By afternoon's end, he had picked up two important endorsements: Sen. Eliot Shapleigh, D-El Paso, rumored to be considering his own statewide run, and Sen. Kirk Wat­son, D-Austin, who briefly flirted with a run for the mansion this summer.

The response to Schieffer's call to rival Democratic gubernatorial hopefuls to withdraw and let White run unopposed was met with a muted response. Rancher Hank Gilbert's campaign issued a statement that "a call to leave the Governor's race and endorse another unannounced candidate fails to resonate with Hank." He vowed see the race through "to an honorable conclusion."