A demonstrator holds a gay flag bearing a Texas-style Lone Star at a Nov. 7 event protesting the Nov. 4 passage of a referendum in Maine banning same-sex marriage. The demonstration was sponsored by Join the Impact-Austin. (Photo by Jana Birchum)

On a mission to Petition

Suddenly online petitions are in vogue as a tool for documenting sober citizen support for progressive city policies – not just for the usual protests. New this week, a Recommit to Climate Protection petition is gathering signatories "to show our support for the Mayor, City Council, Austin Energy, Austin's city leaders ... to achieve rapid implementation of affordable, world-leading, climate solutions." Also new this week is an Austin Great Public Spaces Call to Action petition, to "tell the leaders of our city that collectively we are committed to making Austin's public spaces some of the best in the nation." The group is hosting a kickoff Great Public Spaces party Nov. 22, 1-3pm, at HOPE Farmers Market, in conjunction with the East Austin Studio Tour. (See both petitions at www.thepetitionsite.com.) Meanwhile, the Save the Warehouse District! petition has steadily gathered more than 550 signatures since early August. A search of the petition site also turned up pro-petitions for supporting the Austin cancer survivors plaza, saving the 'Dillo, and making Austin a no-kill animal shelter city. – K.G.

Local charities may be feeling the bitter end of the recession (see "Hard Times in the Land of Plenty," Oct. 23), but local activists hope this weekend's Austin Non Profit Camp will get their information-technology costs under control while adding online tools to their planning. The free event, sponsored by local social media groups including Plutopia Productions and the national Nonprofit Technology Network, is based on the increasingly popular BarCamp model of "unconferences," in which participants drive the agenda rather than rigorously sticking to pre-established scheduling. Co-organizer David Neff said, "We're bringing 100 technology people and 100 nonprofit people ... and we just want these two groups to meet and talk." He explained that the discussions will range "from how to use Google Docs to start your nonprofit to how to use cloud computing to run your servers. Supergeeky topics to nongeeky topics." The daylong event starts at 10am Saturday, Nov. 14, at the Austin Community College Eastview Campus, 3401 Webberville Rd. More info, including registration details, at www.npocamp.net. – Richard Whittaker

Austin Police Cpl. Darryl Fulbright has been cleared of three complaints brought against him by Mindy Montford, a former assistant district attorney who ran for the top D.A. spot in last year's Democratic primary. Fulbright arrested Montford in June on a public intoxication charge. The Austin Police Department's Internal Affairs ruled as "unfounded" Montford's complaint that Fulbright arrested her in retaliation for stepping forward to advise her friend, the driver of the car she was riding in, of his legal right not to take a field sobriety test. Montford also complained that there was no evidence to suggest she was drunk, let alone so intoxicated as to be a danger to herself or others (the legal standard for a public intoxication charge), and that Fulbright should have given her a chance to find a safe way home before hauling her off to jail for what is a fine-only offense. Fulbright was exonerated on both accounts. Montford intends to take her complaint to the Citizen Review Panel tonight, Thursday, to make recommendations on policy – and perhaps to ask that the case be reopened and reinvestigated. As it turns out, the investigator in charge of her complaint was Detective Chris Dunn, who was fired last week for his failure to maintain an impartial attitude in his investigation of the Nathaniel Sanders II shooting death (see "Acevedo: Chris Dunn Is 'Damaged Goods'"). "I still maintain that my complaint was not handled properly," Montford says, "and everybody should be scared of being arrested if this is the standard" police interpretation of public intoxication. – Jordan Smith

Jacksonville state Rep. Chuck Hopson announced Nov. 6 that he's switching from running as a Democrat to as a Republican in the next election, citing disaffection with the Obama administration. Texas Democratic Women President-Elect Joanna Reagan immediately demanded that he return recent campaign donations, while Texas Democratic Party Chair Boyd Richie said, "The only reason anyone would leave is for crass political reasons." The East Texas conservative Dem held House District 11 by a slender 120-vote margin in 2008, and Democrats had predicted a tough race for any Democrat there in 2010. However, Hopson may not be taking the seat with him. Although House Republicans applauded his defection, Hopson's walk across party lines may actually be a march into the political wilderness. While his voting record put him on the Democrats' right wing, he has scored consistently poorly with right-wing think tanks like the Heritage Alliance and Empower Texans, and, in reply to his announcement, the Young Conservatives of Texas wrote, "He's a liberal now, and will always be a liberal." Within two days of his party switch, he attracted a potential primary challenger: Jacksonville dentist Michael Banks. – Richard Whittaker

Raymond Jessop, the first of 12 members of the polygamous Mormon breakaway sect the Fundamentalist Church of Jesus Christ of Latter-Day Saints to be tried in Texas on charges related to the practice of taking multiple (and often underage) wives, has been given 10 years in prison by a jury in the West Texas town of Eldorado. His conviction was based on a sexual assault charge related to his "spiritual marriage" to an underage FLDS member, allegedly a daughter of the group's imprisoned prophet Warren Jeffs; Jessop still faces trial on a charge of bigamy. His lawyers told reporters they would appeal the charge, challenging the search warrants that provided the government with evidence they said proved the charges. Indeed, the warrants were obtained last spring during a raid based on a hoax phone call to officials. The caller had claimed there was abuse happening at the sect's gated compound. Law enforcement raided the ranch, and more than 400 children were removed from the property, but later returned to their families after courts ruled that the state had no cause to remove them. – Jordan Smith

The first Imagine Austin community forum series kicked off earlier this week, encouraging Austinites to "imagine the city of your dreams" in shaping the city's new Comprehensive Plan. At four meetings around town, participants defined the strengths ("We're friendly!") and challenges ("Sprawl!") of our city today, then imagined – if everything were done right – what Austin could become by 2039, the city's bicentennial. At a well-attended Downtown morning session Nov. 10, participants working in teams at a dozen tables used colorful Post-its to describe a remarkably cohesive vision of that desired future. Density, rail transit, flowing traffic, diversity, inclusiveness, affordability, sustainability, and preserved green space were repeated themes. Others imagined that "my grandchildren can remain in Austin with good, well-paying jobs"; that we become "an international model of how diversity, economics, energy, transportation, growth, and sustainability problems are overcome"; that "artists can thrive"; and that we grow up to become "a city that gets things done!" Dreaming on: South by Southwest will be free, waitresses will be able to live Downtown, and we'll all eat local produce. Catch the last sessions tonight (Thursday), 6pm, at Reagan and Travis high schools; see www.imagineaustin.net for details. Ideas also may be submitted through the website, with a community survey available at public library branches, or by hosting a group MEETINGinaBox event. A series in the spring will focus on how Austin should accommodate growth. – Katherine Gregor 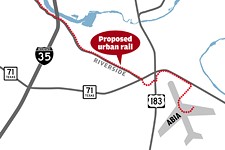 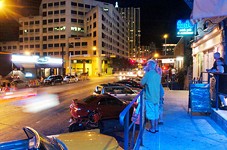 Can This District Be Saved?
The Warehouse District's revival is rooted in Austin's history – and its popularity is also its peril