A new tool sheds light on a path toward conservation 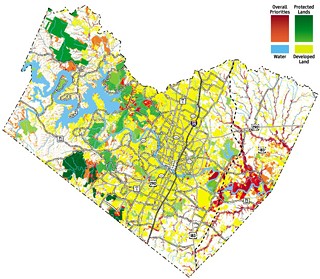 With money for conservation perpetually tight, which lands in Central Texas are most important to protect? Which sites offer the most bang-for-the-buck stewardship by saving natural areas with multiple features that people really care about? As major roads, transmission lines, schools, parks, recreation facilities, government campuses, and private development projects need to get built in the region, how should they be sensitively sited to respect conservation priorities?

Providing hard data to help answer those questions is the new Central Texas Green­print for Growth. A joint project of the Capital Area Council of Governments (aka CAPCOG), Envision Central Texas, and the Trust for Public Land, the four-county Greenprint was released Nov. 11. It adds detailed mapping of community land-conservation priorities in Hays, Caldwell, and Bas­trop counties to the Travis County Greenprint, which was completed in 2006. (See "How Green Grows My County?," Dec. 14, 2007.) Nearly half the project's funding came from the Federal Highway Administration, which saw the value in an integrated conservation planning tool. The Trust for Public Land had hoped to include all five counties in the Envision Central Texas region; unfortunately, William­son County declined to participate or pony up the $50,000 requested. Still, the Central Texas Greenprint offers a wealth of detailed information that could foster cooperative, data-based regional conservation efforts.

It also challenges established Austin attitudes. Because it labels specific tracts, many privately owned, as needing conservation efforts, the Greenprint is inherently unpopular with some landowners. In addition, it presents a very different picture of land conservation priorities than the city of Austin's neat split established in the Smart Growth era: an Eastside Desired Development Zone vs. a Drinking Water Protection Zone covering the western half of the county. Those zones were based largely on a single criteria: the Edwards Aquifer. By contrast, the Central Texas Greenprint, which factors in many complex regional conservation priorities, shows large areas east of town as critically important to preserve as well as several tracts over the aquifer as appropriate for development. According to Sean Moran, CAPCOG's regional planning director, that new picture has raised the hackles of some aquifer-focused environmentalists.

The Greenprint online is a handy tool that rewards time spent viewing and understanding it. (In the interactive version, viewers can zoom in to see how specific parcels rank or view whole corridors proposed for projects.) Hays, Caldwell, and Bastrop counties each led public, inclusive greenprint processes, which identified six key conservation goals:

Each county's participants weighted the shared goals somewhat differently. The resulting greenprint includes separate color-coded "opportunity maps" for each individual goal (which varied for Travis County). The Trust for Public Land's process, used for many areas nationally, employs geographic information system mapping and modeling technology with massive amounts of data-crunching. But Central Texas is the first region in the state to produce an overall composite map showing which lands meet multiple conservation goals.

The greenprint will only be as powerful as its adoption and use. Moran says that he and Envision Central Texas and Trust for Public Land staff are committed to a year of promoting the greenprint to regional planners. But he concedes that consistent reference to the greenprint over time for projects and regional planning efforts will require political will. The three partners have shied away from asking elected officials, regional entities, or constituent groups to adopt or endorse the greenprint. Yet if its supporters fail to show political moxie, the Central Texas Greenprint risks being just another pretty plan; this has largely been the case for the Travis County Greenprint, which has seen very limited use since 2006. While it did affect some county parks-bond planning and the 2035 plan for the Capital Area Metropolitan Planning Organization (which oversees regional transportation planning), according to Envision Central Texas' Sally Campbell, its use and promotion were limited by political and organizational problems.

CAPCOG notes that Central Texas needs conservation planning now more than ever: The Texas State Data Center projects that 1.5 million people will move to the region over the next 20 to 40 years. As the city of Austin's comprehensive planning gets into full gear this week, the Central Texas Green­print is a timely addition to the Imagine Austin dialogue.

To see the report, brochures, and maps, visit the CAPCOG Information Clearinghouse at www.capcog.org/information-clearinghouse/maps. Check back for the interactive map, to be posted soon. See a map of the city's Desired Development Zone at www.cityofaustin.org/smartgrowth/downloads/smartgrowth.pdf.