ARA OK ... but not exactly shipshape 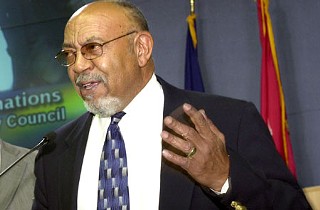 The Austin Revitalization Authority has improved conditions in Central East Austin – but not enough, and not in a financially sound manner. That's the conclusion of a city of Austin audit of the quasi-public agency, which since 1995 has been charged with redeveloping the East 11th and 12th Street corridors.

Auditors also laid some blame on the city for ARA's failure to complete its mission, but the main thrusts of the report, released Nov. 3, are that the East 11th and 12th Street Redevelopment Project needs better monitoring, ARA's finances are shaky, the nature of the ARA/city relationship needs to change and be better defined, and results thus far have – in the understatement typical of auditors – resulted in "community dissatisfaction."

That dissatisfaction arose in large part because the redevelopment that has occurred isn't necessarily what was originally envisioned in the project's master plan, which required ARA to "preserve community character" and bring businesses that would serve and employ area residents. Also, as even a cursory visit to the two streets confirms, almost all the redevelopment has occurred on 11th (where two major mixed-use buildings have gone up and the historic Haehnel building was renovated), while 12th Street "continues to exhibit slum and blight conditions."

ARA board chair (and former City Council member) Charles Urdy agreed with some of the findings, but in a strongly worded reply, he argued that his organization's shortcomings are largely the fault of the city. Delays in or failure to transfer certain parcels of land resulted in "substantial financial damage" to the ARA, Urdy wrote.

The city's operations agreement with ARA ends on March 30, by which time the City Council will have to determine whether to continue working with the organization. A recent assessment of the relationship by the city manager's office concluded that it was "not advisable to continue the relationship as currently structured nor to bring to close our partnership."

The audit made nine recommendations to push the project to completion; City Manager Marc Ott agreed with eight and partially concurred with one (see "The Auditor Recommends," below).

The audit slammed ARA – which was expected to be sustainable and self-sufficient – for being overly reliant on the city for revenues, having "liquidity challenges," and relying heavily on debt to finance its operations. It reported that since 2001, ARA's debt-to-net-assets ratio has jumped from 2:1 to 27:1 (anything above 5:1 is "cause for concern"). ARA's largest source of revenue comes from the city's Neighborhood Housing and Com­munity Development Department, which rents office space in ARA's Eleven East building. "ARA does not have sufficient funds and revenue streams to support its operations and program services in the long term," the audit says; "our review of ARA's current five-year financial plan shows that the financial plan is unrealistic."

Urdy's response letter challenges the importance of the city rental money: "If NHCD were not leasing this space," he wrote, "another tenant in this space would generate equivalent rental revenues." The letter also challenged the audit's formulation for determining liquidity, saying that rather than looking at changes in net assets, a better measure would consider cash and cash equivalents and that ARA's has steadily grown since 2000 to almost half a million dollars. Urdy claims that ARA is currently paying down debts, and "ARA is not borrowing to finance operations. This is an inconsistent notion when the organization is paying down debt."

With regard to preserving community character, the audit says ARA has failed to prevent gentrification (former ARA president/CEO Byron Marshall admitted as much in a Chronicle interview this summer). "An increasing number of current or prospective businesses in the Redevelopment Area target higher-income levels, such as an upscale restaurant, luxury apartments, a yoga studio, and a contemporary art gallery," the report reads. "Most of the jobs brought to the area have not gone to community residents, and existing local businesses have difficulty affording rents, although some assistance is available for small and minority-owned businesses renting space in the Snell and Street-Jones buildings."

"ARA's poor performance is even worse than I imagined it to be, and I have a pretty big imagination," said Tracy Witte of the Swede Hill Neighborhood Association, which borders the project to the north. However, she also criticized the audit itself for "giving insultingly short shrift to what is the most obvious and greatest and long-standing impediment to private investment on East 12th Street, and that is woefully inadequate infrastructure. ... It's more than $6 million in improvements that they've put into East 11th Street for infrastructure. And what have they done for 12th Street? They dedicated $121,000 for facade improvement."

Listing off the many tasks ARA was originally assigned, Valerie Thatcher of the Robertson Hill Neighborhood Association (between 11th and 12th) said, "They haven't done any of that." She said her house near 12th is still surrounded by vacant lots that attract crime. "They've completely neglected 12th. They have not spent their focus trying to attract smaller businesses like sandwich shops or dry cleaners or a minimart that's not a convenience store." She also pointed out that the Juniper-Olive historic homes have not been renovated. "Why weren't they doing these smaller projects instead of focusing on these big, giant, grandiose legacy projects?"

In its report to city management on its audit of the Austin Revitalization Authority, the Office of the City Auditor made the following recommendations on the East 11th & 12th Street Redevelopment Project. City Manager Marc Ott concurred with all but the last one.

• "Re-vision" the project to bring it back in accord with the master plan.

• Clearly define the roles of the three partners in the project (the ARA, the city, and the Urban Renewal Board, which oversees implementation and compliance of the East 11th and 12th Street plan).

• Appoint a "project champion" to oversee the implementation plan.

• Evaluate redevelopment options and financial risks prior to any new contractual agreements.