Saving Rain Forests, From Austin to the Amazon

Nonprofit links people to people for a sustainable future 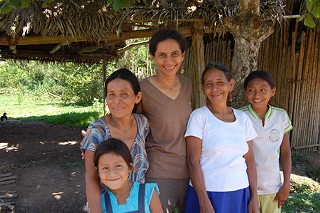 Niyanta Spelman was a teenager living in East Africa when she decided her calling in life was to save rain forests. Then, like many adolescents with noble objectives, she went on to do something completely different. She ended up in Texas, worked in state government for a number of years, and then ran her own management consulting firm while serving on various civic and city of Austin boards.

Yet, while juggling motherhood, career, and meaningful community activities, Spelman continued to hearken back to her youthful dream of fighting the deforestation of the planet, which we now know accounts for 20% of annual carbon dioxide emissions worldwide. In Austin, we feel the pain of global warming in the form of severe drought. "I didn't feel like I was making a difference," Spelman recalls of her midcareer turning point in 2007.

Spelman's outlook is much brighter now. Fast-forward to the present – specifically today, Thursday, Nov. 5 – and Rainforest Partnership, a nonprofit Spelman co-founded, is celebrating the one-year anniversary of its first preservation project, a joint endeavor with indigenous residents of Mushuk Llacta de Chipaota, located in the upper Amazon basin in northern Peru (see "Res Publica" for details on tonight's fundraiser). And in recognition of Rainforest Partnership's first feat, Council Member Chris Riley will sponsor a proclamation at today's council meeting in honor of the organization (Spelman's husband is Council Member Bill Spelman).

It was when Niyanta Spelman was at a career crossroads that she happened to attend a local function where, as guests were called on to introduce themselves, she felt compelled to mention her long-held desire to save rain forests. Afterward, another attendee, Hazel Barbour, approached Spelman and told her she had always wanted to do the same thing. That connection led them to other like-minded people, and before long, on a December morning in 2007, they gathered for the first time to hammer out the framework for what would become Rainforest Part­nership (www.rainforestpartnership.org), with Barbour as board chair and Spelman as its pro bono executive director. Another Austin connection led Spelman to Peruvian Lucia Eslava, who now serves as the group's program coordinator in Peru, along with Jaso Daniel Angulo. With the nonprofit established, Spelman set off to several countries in Central and South America in search of communities looking for economic alternatives to cutting and burning trees for cattle and crops.

Her journey took her to the upper reaches of Peru, where she, Barbour, and Eslava met with local residents eager to trade deforestation for preservation. They found their first partner in the Chipaota community, whose residents had already landed on an economically viable industry – making brooms from fibers of the piassava palm – that didn't require deforestation. But the method by which these fibers were extracted didn't guarantee the longevity of the palms. So the Austin group and the Chipaota community, working with several Peruvian organizations and aided by satellite images of the forest, crafted a management plan that would conserve nearly 9,000 acres of their forest. Now the Austin team is working with Chipaota to create and market crafts and utensils from nontimber treasures of the forest. The group has also formed a partnership with a nonprofit in Ecuador, and there are other projects in the works, too. Not bad for turning a teenage dream into a thriving nonprofit operating out of a humble building that sits alongside Waller Creek, just south of the Convention Center.

"It's no different than starting a business," Spelman said the other day, "except our motivation is different. We're making our success in other ways."