Austin Planetarium group's persistence may finally be paying off

What do the cities of Dallas and New York and even the Mesquite Independent School District have that Austin doesn't?

In fact, Austin is the only one of the nation's top 50 biggest cities that doesn't have one. Currently, if an Austin teacher wants her class to see a presentation on how the universe works, her nearest options are San Antonio and Killeen. Local organization Austin Planetarium is a 501(c)(3) nonprofit founded in 2003 with the sole aim of rallying the community behind constructing a facility here. Torvald Hessel, the group's executive director, believes it would help Austinites and their kids get interested in and informed about science. He explained, "Put a child in front of a rocket launch or talk about the stars, and it's amazing to see how enthusiastic they get."

Among the planetarium's big-name supporters is game-designer-turned-cosmonaut Richard Garriott, who opened his Hill Coun­try house for an awareness-raising event on Oct. 23 (the first anniversary of his return to Earth from the International Space Station). Guests saw the unveiling of a series of conceptual renderings – donated by Arizona-headquartered Davis RKP Architects, which has a branch in Austin – featuring the proposed 250-seat projection sphere at the core of a 115,000-square-foot museum. With guidance from their major prospective donors, Hessel said that the criteria for the potential designs were clear: "Build it in Downtown Austin. Do it large, do it right, and make something beautiful."

The plan is for a 180-degree, 3-D cinema, but also a learning facility with a science museum and a Challenger Learning Center where children can simulate a space mission. There is also interest from local technology companies in sponsoring galleries to display objects from their archives. "The most compelling argument for the planetarium is what it would do for science education in Aus­tin," said Rep. Mark Strama, D-Austin, who chairs the House Technology, Economic Development & Workforce Committee. "It could be such a great resource for the schools."

The planetarium group is already working with educators, having met repeatedly with the Austin Independent School District about teaching opportunities. AISD Science department administrator David Guffey cited a Texas A&M University study showing enhanced context strategies to be highly effective for communicating complex ideas. "That's where kids have the learning experience of the concept in context," he explained. Having a planetarium, he added, would particularly help economically disadvantaged students "whose parents may not have the time or the money to take them outside the city to look at the night sky."

Jim Heath, professor of astronomy and physics at Austin Community College, is another major advocate for the plan. He said: "Astronomy is a very visual science. I can draw something on the board, but it just won't have as much impact as something that I can just put in motion." ACC will extend its astronomy program beyond the classroom next fall with an observation deck at the new Round Rock campus and is working on a partnership to use the planetarium for night classes. That way, Heath said, "I don't have to tell [students] about the system of longitude and latitude for the sky – I can show it to them."

The challenge now is turning the proposal from pie in the sky to stars on the screen. Heath can't rewrite his lesson plans yet, as there is no definite location. Several options, including the Mueller development and space near the Long Center, are under discussion, but most intriguing may be the 1800 block of Congress. Three blocks north of the Capitol and neighboring the Blanton Museum of Art and the Bob Bullock Texas State History Museum, the Congress Avenue site currently serves as surface parking for state employees. Placing the planetarium there could fill out the museum district and allow for underground parking to be built. The Bullock is already a partner organization, and, Hessel said, "It's their preference for us to build next door."

Even with a land donation, the planetarium is still a $60 million project (for comparison, the Blanton cost $82 million), most of which will have to come from donations and sponsorships. With a deficit budget looming, Strama said he doubts that the state would kick in much. He said, "Frankly, going into the session, there are going to be so many priorities that are going to be struggling to be held harmless that the timing isn't good for adding a major new project."

Hessel is realistic about the task. With groundbreaking penciled in for 2012, he explained, two massive challenges lie ahead: "Securing land and attracting a primary donor." But with more groups coming on board and extra development staff being hired, Hessel hopes the project has reached a critical mass. "We have a long way to go," he said, "but I'm very proud of where we are." 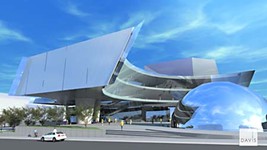