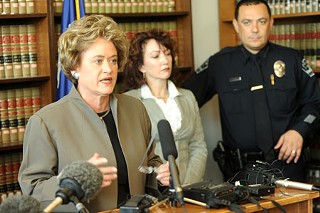 Standing before a gaggle of reporters on Oct. 28, Travis County District Attorney Rose­mary Lehmberg paused halfway through her prepared statement to compose herself. Announcing her decision to dismiss all pending charges against Robert Springsteen and Michael Scott – the two men who were awaiting retrial for the infamous 1991 yogurt shop murders – had clearly gotten to her.

It wasn't entirely apparent whether Lehm­berg was reacting to the specific decision to cut loose Springsteen and Scott, pending further investigation, or instead experiencing a moment of sadness acknowledging the gravity of the entire case. Eighteen years have passed since the grisly murders – along with two trials, both of which were overturned by appeals courts; a dismissal in 2003 of charges against a third suspect, alleged "mastermind" Maurice Pierce, for lack of evidence; and two no-bills by a grand jury against a fourth suspect, Forrest Welborn, who prosecutors say acted as a lookout.

But Lehmberg did make completely clear that she and her team still firmly believe that Springsteen and Scott (and, presumably, Pierce) are the men responsible for the murders of four teen girls – Eliza Thomas, 17; sisters Jennifer and Sarah Harbison, 17 and 15; and Amy Ayers, 13 – inside the North Austin yogurt shop where the two older girls worked. Their bodies were found there – bound, gagged, shot, and burned in a fire investigators say was set to cover the crime on the night of Dec. 6, 1991. "Make no mistake, this is a difficult decision for me and one I would rather not have to make," she read from her statement. "I believe it is the best legal and strategic course to take and is the one that leaves us in the best possible posture to ultimately retry both Springsteen and Scott."

At the heart of the decision to dismiss the cases is last year's discovery of DNA – from an unknown man – inside the youngest victim, Ayers. (Additional testing with newer procedures, which are still experimental and somewhat controversial, suggest that there may in fact be DNA from a second unknown male also found inside another of the girls.) The identity of that male donor remains a mystery – but not for lack of investigation. Prosecutors have tested more than 100 people (some sources say the number is closer to 150) and have spent nearly $227,000 in their quest to find the unknown male. Their search has so far been unsuccessful – perhaps in part because the state has self-limited its search parameters. They've tested first responders, those who were at the crime scene, customers of the yogurt shop, friends and associates of the girls, and relatives of the suspects, but they have not expanded that pool to include other suspects police have learned about over the years or any of the other 48 or more people who actually confessed to the crime. And it doesn't seem that either Lehmberg or Austin Police Sgt. Ron Lara, who is now supervisor over the department's cold case unit, intend to start looking at any of those people now. "Our focus continues on the suspects at hand," Lara said. Investigators will now begin again by "reassessing" – reviewing the case files to consider if there is anything "maybe we overlooked."

Perhaps it's time to assign new investigators and prosecutors to the case, suggested a cameraman. To give new perspective? No, said Lehmberg, no "new eyes" are yet needed on the case. Yet perhaps that's exactly what is needed – the level of emotion Lehmberg and other officials have expressed suggests the degree of their attachment to the current case, as does the decision to maintain the narrow investigative focus.

Remember, Lehmberg said, 24 residents of Travis County, the 12 jurors in each trial, have found these two men guilty. And that's important, she said, as are the confessions each man gave to law enforcement in 1999. Of course, dozens and dozens of jurors have voted in judgment of dozens of men wrongfully convicted in Texas (which leads the nation in exonerations). The list includes, for example, Robert Danziger and Christopher Ochoa, both convicted in high-profile Travis County cases. Ochoa confessed, convincingly and yet completely falsely, to the 1988 murder of Nancy DePriest. It wasn't until 2000 that the real murderer was finally identified, and Ochoa and Danziger were ultimately exonerated.

As for the weight of the confessions in the yogurt shop case, Springsteen's lawyer Joe James Sawyer says there's a major flaw in relying on those statements: In his confession, Springsteen said he assaulted Ayers. We know now that did not happen – unless, of course, he somehow erased all traces of himself at the crime scene and left behind only that DNA of an unknown man. (In fact, no forensic evidence connects any of the suspects to the crime. Most of the evidence was, unfortunately, compromised or lost when the fire was extinguished. Still, there was some evidence, including several fingerprints that, to date, also have not been identified.)

Nevertheless, the families of the murdered girls – victims themselves, who have had to endure nearly two decades of uncertainty – continue to believe along with Lehmberg and the police (and perhaps, in part, because of their assurances) that these suspects are the responsible parties. Ayers' father, Bob, told a TV interviewer last week he is certain Springsteen and Scott are guilty. There's "no doubt in my mind," he said.

But there is now, officially, doubt – at least enough for Lehmberg to not move forward and risk an acquittal.

For Scott and Springsteen, last week's news was a step toward complete vindication. Scott said he would concentrate on being with his family. Springsteen told the Chronicle that he, too, would be going home to family and was already set to begin college, with a double major in computer science and business. He continues to insist he did not commit the murders. Scott's and Springsteen's attorneys, who have been involved in the case for nearly a decade, also insist that their clients are, in fact, innocent. And, says Carlos Garcia, one of Scott's attorneys, the state has the genetic fingerprint of the guilty party: "We don't know where you guys are," Garcia said, "but we're going to match your face to this DNA."