City Hall Hustle: Will the Shill 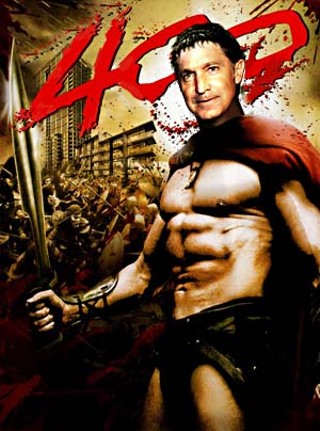 Will Wynn's absence from public life has proven short-lived.

Our former mayor, whose tenure was marked by a steady procession of bridge-jumping, kimono-flashing, and "Thriller"-dancing, never met a PR opportunity he didn't like. Now, after a brief respite from public scrutiny, Wynn – or his voice, at least – has cropped up in radio ads promoting some "Downtown Austin Facts" about the city's oft-maligned condo developments.

The ad opens with a voice whining, "Who's gonna live in all these condos?" Then over some folksy guitar strumming, Wynn offers a rebuttal to the condo naysayers, noting that "only 400 condos" will be available for sale in the next five years. "Think about it," he says. "We have 88,000 more people in Austin than we did five years ago. Experts predict at least another 75,000 in the next five years. And we've got only 400 new Downtown condos remaining for sale, for those five years. ... We love it," Wynn says of condo living, citing high walkability and low utility bills (savings from which could maybe, possibly, conceivably cover your homeowners association fees). "So don't miss your chance at one of these condos. It's good for the environment, it's good for your health, it's good for Austin, it's easy on your pocketbook, and it's a whole lotta fun." (The Hustle won't address the pocketbook claim, because, well, if you can't say anything nice ....)

The PR campaign's website, www.downtownaustinfacts.com, is registered to local developer Larry Warshaw, who, in partnership with Perry Lorenz as Constructive Ventures, is responsible for several Eastside developments and Down­town's Spring Condominium. But Warshaw says the campaign is comprised of themselves and several other Downtown condo builders, including the principals behind the under-construction Austonian, Four Seasons, and W Hotel & Residences. "All of us have a common concern that there's a misperception in the market," Warshaw says. "People look at these buildings and they assume that there's thousands of condominium units, when actually there's only hundreds." Bearing that in mind, he says, "we kinda wanted to take matters into our own hands and get the truth out." While the Downtown Austin Facts campaign seeks to calm populist worries of a changing cityscape, it also resembles a dog whistle to potential builders or investors to get rolling on more projects.

The core message – the 400 condos/five years meme – breaks down thusly: Some 408 condos are available for sale in the big four (Spring, Austonian, Four Seasons, and W), plus 14 others elsewhere, according to Capitol Market Research. The five-year figure is derived from what Warshaw calls "conventional wisdom" when examining the lag time between a project's inception and its opening. "Once you do embark on designing a project, it can take a year and a half to design it and two years to build it," he says. "And so conventional wisdom is, we're at least a year and a half away from someone getting serious about design." Terry Mitchell, part of the Austonian team, adds that the 400 figure covers current condos Downtown and the projects under construction, but only "the ones you can walk around Downtown" from, not projects farther east or south, for instance. "We were looking just at the Downtown market."

Granted, some high-profile high-rises, like the Monarch, aren't condos but luxury apartments, and so there are many more than 400 available residential "units" Downtown. Warshaw draws a distinction between the two categories, though, saying, "They're two entirely different markets." Mitchell concurs, saying the rentals are "a condo in its form, in terms of its shape, but it's an apartment project. It's not for sale." In general, Warshaw surmises condo development "raises some people's hackles, but I think most people are excited about it. ... I think most people are excited by Downtown change."

Downtown development is a perennial in modern Austin politics, dating back to former Mayor Kirk Watson's era, at the very least. Just last week, Lee Leffingwell delivered the mayor's annual State of Downtown address to the Downtown Aus­tin Alliance, promoting more growth in the business district. The week before that saw a town hall on the city's Waller Creek improvements, which will pull a million square feet of developable Downtown land out of a floodplain, clearing the way for further change. But as the necessity of a pro-condo PR campaign testifies, resentment and push-back against the dense skyscrapers is also a renewable resource.

For more on the Downtown Austin Facts campaign, see the Totally Awesome AusChron Newscast at austinchronicle.com/newsdesk.