State House primary races for the 2010 elections are slowly picking up momentum as more candidates file campaign finance paperwork with the Texas Ethics Commission (www.ethics.state.tx.us/tedd/CTA_Office_Sought.pdf). No Travis County incumbent faces a primary challenger so far, but Rep. Donna Howard, D-Austin, has attracted not just one but two Republican opponents. Ex-Denver Bronco-turned-morning-host for ESPN Austin Dan Neil confirmed before the weekend that he filed the necessary paperwork on Oct. 7 for a primary fight against banker-turned-documentarian Glenn Bass for the right to challenge Howard in November 2010. Both are running on their conservative credentials: Bass was part of the Bush-Cheney 2000 campaign, while Neil serves on the executive board of the GOPAC-TX Republican election machine. – Richard Whittaker

Austin Police are asking for help in determining who killed 49-year-old Renee Maria Lindsey, who was found dead in an alley between two businesses in the 6800 block of Guadalupe Street, just northeast of the Airport Boulevard intersection on Tuesday, Oct. 13. Police say Lindsey was found near where she lived and that there were obvious signs of trauma on her body but that she had not been shot. Lindsey is the 18th person murdered in Austin this year. Anyone who might have had contact with or seen Lindsey between Saturday, Oct. 10, and Tuesday, when her body was found, should call homicide investigators at 477-3588 or Crime Stoppers at 472-8477. – Jordan Smith

State Sen. Eliot Shapleigh, D-El Paso, surprised supporters with his Oct. 16 announcement that he will not be running in 2010 for a fourth four-year term in the Legislature. However, analysts have been reading between the lines of the statement from the upper chamber's highest-profile progressive that "other public service may lie ahead." So far, the primary ballots for both Democrats and Republicans make for pretty light reading, with few names confirmed for any statewide races beyond governor, lieutenant governor, and senator. The political consensus is that members of both parties are playing "wait and see" for when U.S. Sen. Kay Bailey Hutchison, R-Texas, resigns to concentrate on her primary challenge to Gov. Rick Perry. Her resignation will likely trigger a cascade of filings from incumbents eyeing higher office and newcomers looking for a vacant seat. However, with the 30-day filing period for slots on the March primary ballot opening on Dec. 3, it's likely some familiar names will make their announcements in the next month. – R.W. 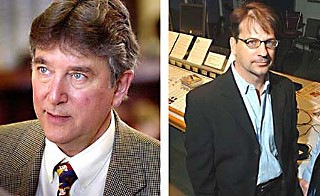 The roiling debate over the change in direction at local NPR affiliate KUT has managed to reach the steps of the Capitol, after Rep. Elliott Naishtat, D-Austin, expressed his support for the station. In that simple act, he admitted, "I had inadvertently stepped into a controversy." According to an open letter he sent to opponents of the current management, Naishtat talked to KUT's Rebecca McInroy on Sept. 18 about his 35 years as a public radio listener. Parts of this interview were used in one of the station's minutelong "Sonic ID" commercials, in which Austinites talk about their connection to the station. After being contacted by critics of the management, Naishtat has since stressed that this was not an endorsement of the station's management. He wrote that while he was disappointed by recent decisions to have less locally produced content, "My only purpose in doing the taping was to indicate my long-standing support of public radio." KUT Director Stewart Vanderwilt called Naishtat "a tremendous friend to the station." As for the advert, he added: "There's nothing controversial about it. He was just heard on the air saying something supportive of KUT." This is a strange reversal in the war of words over the station: In September, the management critics' group, Save KUT Austin, publicly apologized for inaccurately including singer-songwriter Suzanna Choffel's name in a list of its supporters. – R.W.

Tea party protesters on Oct. 17 staged another demonstration in Austin – this time venting their anger at those lefties at the Statesman for failing to cover issues that appeal to your garden variety wing nut. (Photo by Jana Birchum)

Austin solar power took another step forward with the Oct. 8 announcement of a $2 million federal grant for new solar energy technologies. According to Rep. Lloyd Dog­gett, Austin is one of just 16 U.S. cities selected for the U.S. Department of Energy grant, through the Solar America Cities program, which encourages innovative approaches that can be replicated elsewhere. Austin Energy will use the funds for three specific initiatives: 1) a 30-acre solar electric test facility, which can help new technologies reach the market; 2) the Solar Schools program, a partnership between Austin Energy and Austin ISD to help integrate the science of solar technology into high school and junior high classrooms; and 3) developing a business model for how best to use private-sector real estate (e.g., rooftops) for solar technology systems. – K.G.

McDonald vs. McCaul: The McRace Is On

The next congressional election is still more than a year away, but the race for the U.S. District 10 seat is already heating up. Despite three previous Democrats coming up well short in attempts to unseat Republican Michael McCaul, Austin's Jack McDonald, the chairman of the board of information technology consulting firm Perficient, says his run is not quixotic. "I did a lot of study before I jumped in," he told the North by Northwest Democrats Monday night. He also apparently did his homework on fundraising: According to the Sept. 30 fundraising reports, he's already raised $932,613 (only $26,000 of which came from his own pocket), and he still has $805,309 on hand. Compare that to McCaul, who's raised $1.2 million (including a $500,000 loan from himself), with $891,906 on hand. The previous best challenger to McCaul was Houston trial lawyer Larry Joe Doherty last year, who raised $1.2 million total and won 43% of the vote. McDonald says Doherty's mistake was not being aggressive enough in the northwest Harris County portion of the district, where "the average Democrat gets 31 percent. We don't have to get to 51 percent, but we have to take that 31 percent to 36 percent or 37 percent." – Lee Nichols