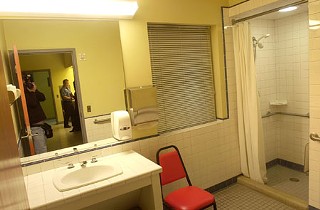 It's been a little more than a year since the Austin Fire Depart­ment's only African-American female firefighter, Nona Allen, filed suit against the department, claiming that she'd been discriminated against on the basis of her gender and race and that she'd been forced to endure a hostile work environment while assigned to Station 15 on Airport Boulevard. (See "Trouble at Station 15," Jan. 16.)

Allen's suit focuses on what she considered unequal facilities at Station 15 – the men's locker room was large and well-appointed, while the women's locker room was a bare cinder-block room, devoid of furniture or amenities. (The station's vending machines, for example, were in the men's locker room, meaning Allen couldn't grab a soda without asking a male firefighter for help.) Allen was assigned to the station in 2007 as a probationary officer, and, notably, a desk and chair she had moved into the bare women's locker room so she could study for her competency exams (crucial to her graduating from "probie" status) were removed from the room several times without explanation. When she finally received a reason, it was in the form of a posted note from Jim Evans, assistant chief at the time and later interim chief before Chief Rhoda Mae Kerr was hired on, which declared bluntly: "This locker/restroom is to be left empty of any desk or other personal effects not belonging to female firefighters." When Allen asked for clarification she said she was given none and simply told that the room was to remain empty.

That created an unequal and hostile work environment, Allen argued, and ultimately, last fall she filed suit against the department. The city has argued in court filings that Allen has failed to show that she was discriminated against based on sex or race and that "the moving of a desk and chair does not rise to the level of a hostile work environment," Assist­ant City Attorney Chris Edwards wrote in a motion in February, arguing that the case should be dismissed. Civil District Judge Rhonda Hurley agreed with the city in part and dismissed several of Allen's claims but ruled that her "claim of [gender] discrimination based on a hostile work environment" could move forward. 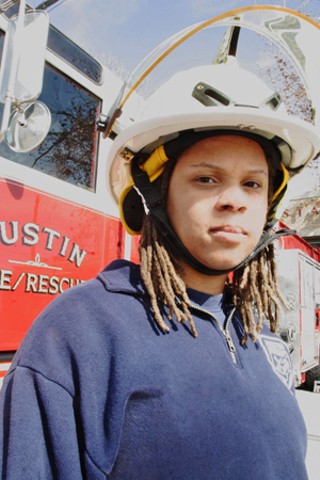 Last week the city filed a second motion for summary judgment, arguing that there is no evidence "of hostile work environment harassment based on sex or race because the directive and order she complains of affecting fire station locker rooms were issued at the request of the women firefighters, and were issued station wide," Edwards wrote. Specifically, Edwards says that in January 2008 a group of female firefighters complained to the AFD's Diversity Council that male firefighters were storing furniture and other items in locker rooms designated for females at various fire stations regardless of whether women were stationed there. That was the case at Station 15: Before Allen was assigned there, male firefighters had placed a bed in the women's locker room in an attempt to isolate "snorers." As a result of the Jan. 19 Diversity Council meeting, Edwards wrote, Evans "immediately issued a verbal directive to remove all male belongings from the women's locker rooms at all stations." So the city argues that the subsequent moving of Allen's desk and chair from the locker room at Station 15 was a miscommunication, based on the department's attempt to comply with the new directive.

Allen's attorney, Will Sutton, said the as-yet-unscheduled hearing on the city's latest motion will determine whether Allen's case will make it to trial. Legally, he said, Allen's case is "right on the line" – and which way things will go is anyone's guess. In order to prove her case, Allen will have to show that the alleged discrimination "altered the terms and conditions of her employment in a significant way," said Sutton. "If it did, we win; if it didn't, we lose."

Undeniably, the AFD has had difficulties in creating equal spaces for its 55 women (that includes Kerr) at its 45 stations. Construction to create "equal" facilities for women within AFD's existing facilities began in 2000, when then-City Manager Toby Futrell tagged $675,000 in funds to remodel a total of 11 stations. The project was later expanded to include additional stations and is still not complete. As of 2008, some $4 million had been spent on the project to remodel the original list of 11 stations and to plan for the remodeling of another 18. Construction is slated to begin next month on renovations at six stations, but an additional $1.25 million was not included in the fiscal year 2010 Capital Improvement Project budget, meaning work on five stations will have to wait. Additionally, there are six stations where the station footprint makes it impossible to remedy the disparity with a simple remodel; exactly how those facilities will be handled has yet to be decided. (Three facilities did not require any remodeling.)

The AFD's newest stations (including No. 45, set to open next year) have all been built to accommodate everyone and are "gender neutral," says AFD spokeswoman Michelle DeCrane. In those buildings, the entire station is "shared" space but contains private facilities for each firefighter to use to shower and change clothes. Kerr prefers to consider the stations gender neutral, says DeCrane, because it diminishes any sense that the department is split, men vs. women.

In January, Allen told the Chronicle that the differences in locker rooms and management's refusal to allow her any amenities at all did indeed alter the terms of her employment. At a fire scene, she said, she felt equal – elsewhere, the message was clear that she was not. "You get back to the station all pumped up, and all the guys would go celebrate in their locker room, jamming to music, drinking Cokes, and hanging out sitting around on cushioned chairs," she said. "That's when it really hit home," the message that she wasn't worthy of the same work environment afforded her colleagues. "You don't belong here. Every day I got that message," she said. "I just got the feeling that I don't belong here – that they were saying that you're not equal to us, and I didn't deserve the same treatment as everyone else."