Tweet
print
write a letter
• Look what just blew in: Austin Energy General Manager Roger Duncan announced Wednesday that he'll retire effective March 1, 2010, after 35 years with the city. Duncan is credited with spearheading most of the utility's energy efficiency and renewable production programs.

• City Council doesn't meet this week, but Mayor Lee Leffingwell was on hand Wednesday morning to oppose the expansion of a controversial landfill in northeast Austin. The Texas Commission on Environmental Quality kicked the question of operating hours to an administrative law judge.

• Outside consultants reviewing the Austin Police Department investigation of the Nathaniel Sanders II shooting found "bias" in the process – although details won't be known until Chief Art Acevedo makes his disciplinary decision, due by Nov. 7. See "Sanders Shooting."

• Capital Metro began its transition to the post-Fred Gilliam era, as officials speculate on what's next for the troubled transit agency in the wake of the CEO's retirement announcement. See "Gilliam Retires."

• Sharpen your pencils, and check your calculator batteries: The three finalists in the running to be Austin's next city auditor will meet the public at 6pm, Wednesday, Oct. 14, at One Texas Center, 505 Barton Springs Rd. 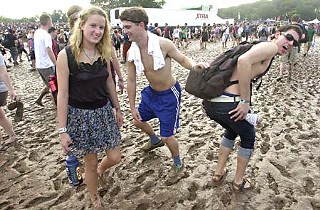 • Waist Deep in the Big Muddy: The Austin City Limits Music Festival came and went – leaving behind a sea of stinky Zilker Park mud – but the show promoters promise restoration, and the Parks and Recreation Department says it's not as bad as it looks. See "Off the Record."

• The Obama administration is officially said to be considering all options for the war in Afghani­stan – by which it means either standing pat or sending more troops – but "ending the war," now supported by a majority of citizens, is reportedly not an option.

• Tom DeLay avoids the judges once again: While his indictments on campaign finance law violations are still pending, the former House Majority Leader walked off Dancing With the Stars (well, hobbled off), citing stress fractures in both feet.

"Today, it is time for me to return to my original role as an involved citizen of Austin."