Can it be? Austin's urban design and planning processes actually seem to be working, at least for the South Shore planned unit development. The large mixed-use project proposed by developer Grayco Partners goes to City Council Sept. 24; Grayco is seeking PUD zoning for a 20-acre site between South Lakeshore Boulevard and East Riverside Drive, along a stretch of Lady Bird Lake. As the first test of council's reasserted power to consider a PUD that trumps Waterfront Overlay Ord­in­ance provisions, the project has been closely watched. While not perfect, it's darn good, thanks to all who have worked hard on raising Austin's PUD, waterfront, and urban design standards.

Other city rules and efforts shaping this PUD include commercial design standards, the East Riverside/Oltorf Combined Neigh­bor­­hood Plan, and the East River­side Corri­dor Master Plan. All emerged from extensive stakeholder processes, countless citizen volunteer hours, and project-specific suggestions from neighbors, planning professionals on city staff, city boards, elected officials, environmentalists, and activists. As a result, the proposed South Shore PUD is a veritable goodie basket of features, contributions, and amenities corresponding to every hot-button issue in Austin. It's got strong water-quality protections. It follows or exceeds every set of design standards the city has established. It's got homes (some affordable, some handicapped-accessible) integrated with a shopping/dining district. There's native-landscaped open space, plazas with public art, nice broad sidewalks and streetscapes, and trails around a landscaped pond and over to the lake. It follows transit-oriented development principles, as it's within walking distance of future rail transit down Riverside; it includes cash to upgrade bus stops, traffic signals, crosswalks, bike lanes, and car-share parking spaces. There's free commercial space for a nonprofit or day care and public safety, reduced rent for locally owned small businesses, and even a $25,000 contribution to restore the decrepit historic Norwood House nearby. The list goes on.

In exchange for all that, Grayco is seeking a sole exception: increased height allowance to 90 feet on some of the six tracts vs. the 40 or 60 feet allowable, and perhaps 120 feet on one tract outside the waterfront overlay (still negotiable). Due to the PUD zoning and height requests, Save Town Lake is protesting the project and urging, "Write or call the Austin City Council and tell them to reject Grayco's application." But this development, unlike the controversial CWS Capital Partners project that Save Town Lake fought earlier, isn't seeking to build closer to the shoreline than allowed. In this subdistrict, buildings must be set back 50 feet from the south side of Lakeshore Boulevard; Grayco complies, in one tract increasing the setback to 100 feet. Between Lakeshore and the water, the whole area is already public parkland with a trail. Would the average person even consider this across-the-street site "waterfront"? 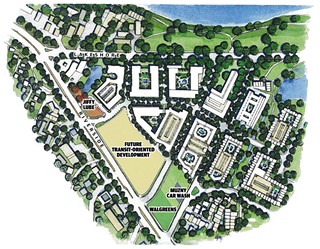 An artist’s rendering of what the proposed development might look like
Source: City Staff report, Grayco PUD

Some neighborhood advocates have protested the heights over 60 feet on principle. But the entire surrounding area is being redeveloped as mixed-use: On one side of the proposed PUD, a new AMLI project is going up; on the other, the large Lakeshore PUD is already approved. Both have similar density and heights up to 120 feet. Grayco also agreed to remove from the project the land it owns immediately adjacent to Riverside, allowing for future transit-oriented development in keeping with a master plan, if and when rail in the corridor comes to pass.

"The new PUD ordinance was really a blessing," said John Donisi for developer representatives Dren­ner & Golden Stuart Wolff. "We were able to just move down the list and find things we could plug in, to add all the different desired benefits." (This raises the question of why the Real Estate Council of Austin reflexively fought the new system.) Citizens who saw their concerns incorporated into the PUD ordinance didn't have to weigh in again on this project, he noted. For example, advocates for people with disablities got a requirement for accessible housing into PUD standards. "Frankly, we'd never have even thought to bring that up to our client," said Donisi. But Grayco now is proposing to provide 25% more handicapped-accessible units than PUD rules require. Overall, "we presented what we thought was the best possible project up front, with no holds barred," said Donisi, rather than waiting for fights. "That works better for the decision makers too."

Moreover, the proposal's community benefits have steadily improved since January (see "PUD Ordinance in Action," Jan. 30). Originally, Grayco was complying with just 11 of 12 applicable Tier 1 PUD provisions; now it's complying with all of Tier 1 and 12 of 13 applicable provisions in Tier 2. Added is affordable housing: 10% of units available for those living at 80% of median family income, $1.5 million in funding for affordable senior housing off-site, or some combination of the two. City Council is likely to address whether affordability needs to be deeper, as East Riverside is a lower-income area and 600 to 700 older units would be removed – along with the people who live in them. Resident Dawnna Hyndman, whose apartment would be razed, filled out a comment form, plaintively asking the city for help in relocating: "I have no means of transportation, and I'm on disability, also I have no way to move myself or my things, or the finances to do so. Thank you for listening." (It's worth noting that Cathy Echols*, who worked on the PUD ordinance, said she and others do not believe Grayco's proposal meets its affordable housing requirements. By her calculations, the in-lieu fee should be at least $5 million, not $1.5 million.)

Whatever the final outcome, city staff should be commended for attentively bird-dogging this project, as well; they persuaded Grayco to include more good-design provisions, such as step-backs for building heights. The urban design site plan has become nicely detailed, creating greater confidence in how the project will look and feel. "We're at 50 PUD notes and counting," said Donisi. "I've never worked on a project that had this many details in the notes, all enforceable by the city."

What's missing that would give the project a sparkling "wow" factor, worthy of resounding community support? First, design by a top-tier architecture firm, renowned for national excellence in creating beautiful, context-sensitive projects on this scale. (Grayco's architect thus far is Wallace Garcia Wil­son Architects; the Houston firm's similar projects look adequate but aesthetically bland.) Second, a great public park. Grayco already has pledged about $800,000 for nearby parks (via parkland dedication fees), plus $200,000 more toward the city's proposed boardwalk project or a pedestrian bridge study. But what the project really needs is a bold public/private vision for a new waterfront park that serves the entire neighborhood. If Grayco engaged the two developers on both sides, together they could transform the dull waterfront stretch of parkland along Lakeshore into a stellar neighborhood amenity. Thousands of new residents are going to spill into that park once all three major projects are completed. Could Grayco lead the team to make it happen? "We'd be open to that," said Donisi. "We all have an interest in it being wonderful and supporting the density we're bringing."

*[Editor's note: In the original version of this article, Cathy Echols was incorrectly identified as a planning commissioner.]