When you budget with your fingers crossed, the dice eventually come up snake-eyes 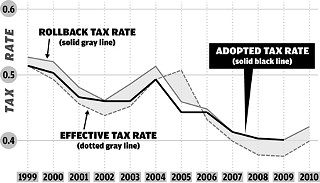 A quiet watershed of sorts occurred at City Hall last year, as council thumbed through the proposed 2009 budget. Retiring Mayor Pro Tem Betty Dunkerley, revered as the council's financial sage, noted Austin's "abnormally low" property tax rate is "too low ... to support a city this size." To many, this concession from the City Council's departing fiscal architect came a day late and several million dollars short. In fact, Dunkerley's observation might now better be described as conventional wisdom: Longtime overreliance on sales tax and an unwillingness to set the property tax to the rollback rate has left the city in the budget lurch for most of the last decade.

We raised this quandary last week; this week, we hustle a closer look.

Starting with sales tax: The end of century brought flush times. But then sales tax receipts were battered by the dot-com bust recession, then worsened by the aftermath of 9/11 – the discrepancies between projections and collections oscillated wildly. From 2001 on, the city overestimated, until 2004, when returns came in nearly 6% over meager projections. Budgeteers got it right in 2005, predicted conservatively in 2006, a little less conservatively in 2007, and then, with the latest crash, were essentially dropped off the cliff anew in 2008 and 2009. Looking backward, the problem is less an outright overreliance on sales tax than an inevitable lack of predictability. From 2000 on, the city's mistakes were nearly evenly split between overestimating and underestimating sales tax, five to four, with just one year coming in right on the mark.

So with one revenue stream dependent on the whims of consumer confidence, that leaves only one other major funding mechanism – property taxes. In the last three budget cycles, beginning in 2007, the city actually raised the ante all the way up to the rollback rate (the highest rate allowed by state law without a special election, bringing in roughly 8% more than the previous year). The trouble is: If you're already in the hole, due to prior reluctance to raise taxes when times were good (and sales tax filled the gap), the rollback rate barely meets the basic needs of an ever expanding city.

In retrospect, it's tough to look back on the city's actions from 1999 to 2001 – under Mayor Kirk Watson – and not cringe. In the boom economy of 1999, property tax rested at the effective tax rate (which collects the same revenue as the last year), while in 2000, it was a penny over the effective rate but roughly a penny and a half below the rollback rate. The same scenario repeated itself in 2001, this time with plunging sales tax collections. The rest, as they say, is history. Indeed, in years when Dunkerley was on the dais but before her latter-day epiphany, the council inevitably relied on rising property values to allow a steady drop in the rate – raising somewhat more money that year but establishing a lower cap for the following year, all while income continued to lag behind expenses.

Today, the council seems to agree it's better to plan for the long haul. Randi Shade e-mailed the Hustle to say, "We probably have been over-reliant on sales tax during the good times which causes big challenges in tough times like the one we're in now. ... If we operate with a steady, modest growth rate tied to increases in population and demand during the good times and bad times alike, then we don't have to do major budget cuts when people seem to need city services the most." Mayor Pro Tem Mike Martinez says the rollback cap means "in years where you're hurting and needing to generate that revenue just to maintain the same services, you fall farther behind. ... Our budget policy should be we start at the highest tax rate possible. And then if we can work ourselves down, great. But if not, we need to maintain those services." And Mayor Lee Leffingwell adds that the rollback "really limits your flexibility to deal with tough times, and it limits our flexibility to do things we might wanna do, such as, eventually, a homestead exemption."

But even this year, the rollback could prove a hard sell. "I want to find some more money," says Bill Spelman, hunting for funding to offset the higher rate. Referring to the city's "menu" of potential budget reductions, he says there's not much "low-hanging fruit" left, "but with just a little bit longer ladder, we can reach a few more million dollars ... and that would be enough to back off on that property tax rate, so we're no longer at the rollback rate. If we can cut people a break now – if we're gonna cut people a break at all – this is the right time for us to try and do it."

In this economy, it's a popular sentiment – just as it was in the turbulent mid-2000s, the dawn of the Dunkerley era, when council crept away from the rollback rate at the city's peril. Plus, the late-breaking inclusion of extra Austin Energy revenues makes you wonder what other city revenues could be reached with that slightly taller ladder. But as council members vote on the final city budget, they should remember that the actions they take this year will reverberate into next year's budget.

Amount in millions of dollars and change from previous year.