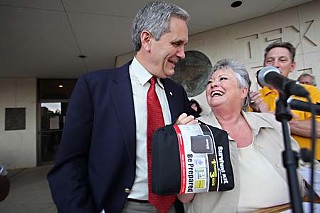 Texas AFL-CIO President Becky Moeller provides U.S. Rep. Lloyd Doggett, D-Austin, a “survival kit” to help him on his return to Congress to fight for health care reform. Also saluting Doggett at the Labor Day fish fry were the Austin Central Labor Council and the Texas and national Alliance for Retired Americans. Doggett said he would fight for a “strong public option” in the reform legislation and against attacks by “know-nothing, fear-mongering wing nuts – about the only people left in the Republican Party.” (Photo by Jana Birchum)

Dems and Their Wicked Ways

Austin hits the national political stage again this week, as the Demo­cratic Nation­al Committee national and state party leadership holds its fall meeting here, Sept. 10-12. In response, the Republican Party of Texas sent out an e-mail blast titled "Something wicked this way comes ... literally, the Demo­crats!" In it, Austinite and DNC Com­mit­teeman Rick Cofer is quoted as saying, "The DNC selected Texas for the September meeting precisely because we're on the cusp of turning Texas blue." The GOP then called for its supporters to tell "the Democrats to go home and keep their HANDS OFF TEXAS!" That would be a bit hard for Democrats like Cofer, who already live here. In response to the GOP hyperbole, he replied, "Of course Democrats aren't wicked, and, for that matter, neither are Republicans." Rather than engaging in ad hominem attacks, he said, "I wish the Republican Party of Texas would worry more about improving public education, expanding health coverage, and cleaning up state government than a meeting of Democrats." – Richard Whittaker

Mayor Lee Leffingwell, flanked by City Council Members Randi Shade and Mayor Pro Tem Mike Martinez, announced a plan to increase the number of construction contracts awarded to local firms, keeping more money in the Austin economy. While still being finalized, the Go Local initiative, one of Leffing­well's campaign promises, would add new criteria to the scoring matrix staff uses when awarding contracts; Lef­fingwell said a local presence would be weighted "somewhere in the neighborhood of five to 10 percent" when selecting a firm. "All things being equal," he continued, when pressed whether the plan might cost the city more by not always going with the lowest bidder, "the local firm would have the advantage." Martinez, noting that the city awarded more than $218 million in construction contracts last year, said the change could encourage major firms to develop a local presence, providing another economic boost. (Larger firms would have to create a real local presence in order to qualify: "They're not going to be able to stick one guy in an office on South Con­gress," Leffingwell said.) The change – being handled by staff, and not through council action – is expected to occur "within the next 30 days," says Leffingwell. – Wells Dunbar

More than 250 applications have been submitted by people willing to serve on the Citizens Advisory Task Force for the city's new comprehensive plan. Submissions were due Sept. 3. Council members and staff say they've spent much of the past week poring over the applications; they're forwarding their short lists to council's Compre­hen­sive Planning and Transportation committee. Its members – Chris Riley, Laura Morrison, and Sheryl Cole – meet on Thursday, Sept. 10, to craft a short list of about 40 names. From there, council as a whole will approve a final, diverse roster of 21 to 29 task force members. Look for the item on council's Sept. 24 agenda. – Katherine Gregor

Some familiar names are seeking statewide office. Marc Katz, the Katz's Deli owner and failed 2003 mayoral candidate, is seeking the Democratic nomination for lieutenant governor. He's running on a platform of managing Texas like a business and said he hopes to fund his run on small donations of $50 and $100 (a change from 2003, when he sued the city of Austin to get its $100 campaign contribution cap lifted). Next in the governor's race will be Republican Debra Medina, last seen getting national coverage for promoting Texas secession on the Capitol steps even if it could lead to "a bloody war." Her campaign announced she will officially declare on Sept. 12, but there may be some damage control to do first. After her people heavily promoted a letter from Rep. Ron Paul calling her "a real defender of liberty," the sometime-Libertarian's people said this was in no way a formal endorsement. Meanwhile, Houston businessman Farouk Shami announced that he's considering challenging Gov. Rick Perry as a Democrat – a month after Perry praised him for increasing employment at his Chi hair product factory. – R.W.