A New Lease on Life for Pearce? Not Exactly.

Pearce has been repurposed – but for what purpose?

When the Texas Education Agency approved the repurposing plan for Pearce Middle School on Aug. 4, the school district and the neighborhood community presumed there would be five years to tackle the repurposed school's complicated problems. Instead, the TEA has announced that the deadline could be as close as one academic year – so parents, staff, and students fear that the school's chances of becoming successful have been radically diminished.

The technical problem is the campus Pub­lic Education Information Management System number. When a school is given a new PEIMS number, that creates a new TEA file for the campus, thus erasing the old accountability record. Education Commissioner Robert Scott never explicitly promised that he would issue a new number to clean Pearce's slate, but according to St. John Neighborhood Association President Allen Weeks, that was the message that stakeholders received at their July 14 meeting. Weeks recalled, "He said to the group that if we got through the repurposing and got it approved, then the clock could restart."

TEA communications director Debbie Ratcliffe called the PEIMS number "just an identification number for the campus." Previously, TEA's practice was that a repurposed school automatically got a new PEIMS number. Pearce has been repurposed – with a new academic plan, a new principal, new staff, and "opt-in only" enrollment – but Ratcliffe explained that Scott wanted the district to have "a sense of urgency about the business. If the clock restarts, it can be another five years before things really start to turn around." That explanation did not persuade Weeks. "If that was his intention," he replied, "then he should have stated that from the beginning."

Pearce isn't the only school with PEIMS problems. Last year, Eastside Memorial High School (formerly Johnston High) got a new number for its interim repurposing, while the Austin ISD set up two schools – Green Tech and Global Tech – opening this fall. But while Global Tech has received a new number, Green Tech is keeping the old one, thereby classifying it for one year as "academically unacceptable" before a single class has been taught.

Why the confusion (if that's what it is)? Scott's staffers point to the fact that they are working from both the old state accountability system and new rules established under House Bill 3 last session (TEA has not yet written a full set of rules based on HB 3). That's a problem for the state, because the fate of Pearce is a test of the reforms. Bill author and House Public Education Commit­tee Chair Ron Eissler, R-The Woodlands, said, "You can't really blame [Scott] for saying, 'I'm going to look at this for another year; I'm looking for improvement.'" However, Eissler said, it was clear to legislators that "the underlying tone [of HB 3] was to put less pressure on kids but put more pressure on schools."

Yet that notion only works if the repurposing plan works in year one. Superintendent Meria Carstarphen has compared repurposing to the building-blocks game Jenga: When you start pulling parts out, you don't know if the whole structure will collapse. The same applies to moving teachers between schools. Due to TEA's late announcement of the repurposing, the district found permanent hires for only 14 of 18 Pearce classroom vacancies, with the remaining positions filled by district curriculum specialists. Education Austin Pres­ident Louis Malfaro argued that, by making the school seem "perpetually toxic," Scott is discouraging good teachers from applying. "When you walk through the door as a professional, then you're taking a professional risk about whether or not the school stays open," he said.

While AISD board of trustees President Mark Williams echoed Malfaro's worry, he also fears the district may have little time left over to commit to Reagan High – which is in its fourth year of being classified as "academ­ic­ally unacceptable" (see "What About Reagan?") or Garcia Middle, which is in its second year of "academically unacceptable." "My fear is that we're going to wear down our management," he said. "Working with these three campuses is on top of everything else we do." As for concerns that AISD and TEA are locked in an adversarial relationship, he warned, "Those two buildings have got to find ways to come together."

For now, the district's priority is getting every campus – not just Pearce – to achieve the "academically acceptable" rating or better. "Come next August, they'll get a rating," Ratcliffe said, "and if they're not acceptable, the commissioner will look at the various options he has."

For Weeks, that's unacceptable. He said: "Repurposing should mean repurposing. You've fired the principal, you've fired the assistant principals, you've done this grand turnover, then you get time to make it work without this dagger hanging over the school." 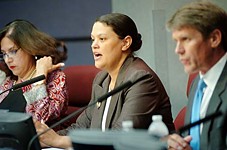