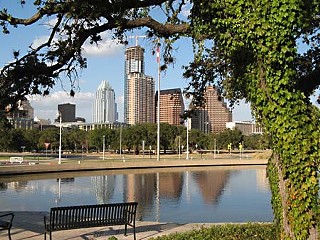 The view from Butler Park (Photo by Richard Whittaker)

"Beauty in nature nourishes us and brings joy to the human spirit."

Those words by Lady Bird Johnson are carved on a stone by the side of the pond in Butler Park, just south of Riverside Drive. The shallow ornamental pool on the north side of the Palmer Events Center is a serene home to small fish, birds, dragonflies, and the occasional blotched water snake. But the quiet pond has now become the locus of the latest round in a 13-year controversy over a $1 million art donation. Proponents want a space to commemorate and inspire cancer sufferers and survivors; opponents say it would hand over public land to a corporate art project.

The proposal, by the R.A. Bloch Cancer Foundation, is to convert the existing pond and about an acre of the 22-acre Butler Park within the larger Town Lake Metropolitan Park area into a cancer survivors plaza. It's part of the foundation's national effort to place similar parks in every metropolitan center in the U.S. and Canada with a population of more than one million. So far, there are 24 plazas, including one in Dallas and another in Houston. Parks & Recreation Department Assistant Director Stuart Strong said the proposal would really help the pond, which he called "an underutilized site that could use some enhancements."

To receive the $1 million Bloch grant, a park must contain three elements: a sculpture by Mexican artist Victor Salmon­es portraying eight life-size figures in a maze; a Positive Mental Attitude Walk; and the Road to Recovery. Beyond that, the rest of the plaza is up to each locality. The Austin proposal, designed by TBG Partners (the firm responsible for the Town Lake Park Master Plan), would place a large stone walkway across the pond and includes the sculpture as well as 21 bronze plaques bearing inspirational messages.

But this isn't the first Austin plaza design or the first time it's been proposed. There have been on-again, off-again negotiations since 1996, when City Council rejected a request to use the southwest corner of Cesar Chavez and Congress (see "Council Blocks Bloch," Nov. 14, 1996). Back then, there were concerns about putting a different design, which included a monumental waterfall, on the hike and bike trail. At the time, Bloch's representatives told the Chronicle that the Congress location was nonnegotiable, and since then they have rejected other proposed sites, including Pease, Wooldridge, and Waterloo parks. Now the Bloch group and Austin Parks Foundation back the Butler Park location. Foundation Executive Director Charlie McCabe argues this proposal differs from earlier efforts because, while it would carry the Bloch name, "this is really driven locally, whereas [previously] it was driven much more centrally by the Bloch Foundation." 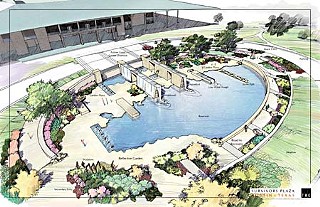 Other park activists are more cautious. Bill Fraser, who has spearheaded several park initiatives, including Operation Flag the Turd's pet-poop awareness project, called the plaza "franchised art disguised as a concept gift" that may violate the city's Art in Public Places guidelines about not buying existing works for Town Lake Park. More significantly, he said, "When you ask people about the redevelopment of Town Lake Park, the first thing you hear is, 'Well, why haven't I heard anything about this?'" The city wouldn't have to consider this dedicated project, he argues, if it had been better at community outreach. Instead, he said, "You have the R.A. Bloch Foundation coming to us for the third time, telling us they have to have prime visibility in order to receive this money."

McCabe agrees that funding "is a factor every day of my life in the foundation" and that, even in better budget years, the system is dependent on "bonds, donations, and fundraising." The Bloch grant would not cover the entire project: $900,000 would go to the construction, with the other $100,000 as seed money for major capital maintenance such as pumping equipment ("It's not for watering the lawns," he said). The proposed design would have spaces for another 11 locally commissioned art pieces, but to buy and maintain them will require a long-term fundraising commitment from the Austin Parks Foundation.

Presentations have been made to both the Art in Public Places panel and the Parks and Recreation Board, but it's a long way from a finalized design being presented to council. If it does finally open at the proposed site, the plaza will be visible from the Long Center for the Performing Arts. Center Executive Director Cliff Redd said it would attract people to the pond and create "a beautiful, healing place to go," and he's surprised that it has created this much controversy.

But the warnings may have been by the pool all along, carved into another of the poolside stones, this time quoting Doug Sahm:

"You can teach me a lot of lessons,

You can bring me a lot of gold,

But you can't live in Texas,