After rocky start, district tries to smooth out bumps 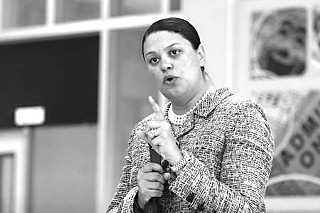 The buildup to the new academic year in the Austin Independent School District began in earnest this week with the start of new teacher orientation and student registration. Traditionally, the district expects to have all its vacancies filled and the direction set for its campuses by this time. But with the Texas Education Agency still mucking around with Pearce Middle School and Reagan High School, the district is still filling positions and finalizing its proposals to meet TEA's demands.

For Pearce, the current repurposing resets the school accountability clock. But if Reagan is judged academically unacceptable for a fifth year, the school faces closure in 2010. Even with this year's passage of a new accountability system under House Bill 3, which gives the state education commissioner the discretionary power to grant schools a one-year extension, Commissioner Robert Scott has already warned the district he will shutter Reagan if it does not make sufficient improvements.

Both schools are on a list of 10 AISD campuses sharing a 21st Century Community Learning Centers grant. This TEA money, worth $8.5 million over the next five years, will provide before- and afterschool science programs for students. That doesn't mean TEA is covering all improvement costs. At Reagan, the TEA ordered AISD to bring in outside tuition and "professional development" services at its own expense. While no provider has been finalized yet, TEA spokeswoman Debbie Ratcliffe explained, "We asked [AISD] to find someone that they'd be comfortable with and then we'd sign off on that."

As for Pearce, the new repurposing plan gives the campus direction, but as of the board's Aug. 10 meeting, Pearce still had multiple vacancies to fill (three assistant principals, two counselors, two instructional specialists, and "a dozen or so teachers," Superintendent Meria Carstarphen told trustees). The school does have a new principal: Trana Allen, the current principal of Berkman Elementary in Round Rock ISD. Formerly the summer school principal for AISD's Limited English Proficiency program, Allen was selected in part because of her experience in bilingual education.

So far, the AISD trustees have been cautious about criticizing Scott, but Cheryl Brad­ley broke that dam at the Aug. 10 board meeting when she accused TEA of micromanaging Carstarphen and treating her "like she is not capable of hiring a principal." Defending her abilities and the board's selection, Bradley added, "We did not go into a box of Cracker Jacks and pick the first thing that came out."