Do we need an intelligence 'fusion center'? Do you have to be a bong-smoking, V for Vendetta-viewing Ron Paulite to think "fusion centers" are a bad idea? That was the unspoken question before City Council last week, as it took the first step in creating an Austin Regional Intelligence Center, a Central Texas fusion center that would facilitate intelligence sharing between Austin's public safety responders, sheriffs' offices in surrounding counties, and Pflugerville and San Marcos police. And though the discussion last week veered toward spectacle – how often do masked men address the council? – civil libertarians and privacy advocates are raising troubling questions and past examples of abuse.

"A fusion center is a cooperative effort of public safety agencies to combine public safety data to better utilize resources to improve the safety of our citizens," according to city documents. Another opinion holds that fusion centers exemplify the worst tendencies of our post-9/11 plunge into security hysteria, facilitating privacy-destroying data-sifting across multiple agencies in an atmosphere of diffused responsibility. Worse, opponents say, fusion centers can be used to target individuals and groups. The North Central Texas Fusion System is a cautionary example. In February, the center issued a bulletin warning, "Middle Eastern Terrorist groups and their supporting organizations have been successful in gaining support for Islamic goals in the United States and providing an environment for terrorist organizations to flourish." The evidence for jihad in the Metroplex? "Tolerance is growing" in formal and informal ways, such as airports installing footbaths "to accommodate Muslim prayer" and the supposed banishment of pork from the workplace. But this laughable armchair analysis also warns of anti-war and pro-Muslim organizations, saying: "Law enforcement should be aware of activities in their area. ... It is imperative for law enforcement officers to report these types of activities to identify potential underlying trends emerging in the North Central Texas region." ACLU national security policy counsel Michael German said in a press release that the center's bulletin "demonstrates the lack of professionalism that exists at fusion centers and the severe lack of oversight at the state, local, and federal levels."

Nevertheless, last week's City Council agreement inked a deal with the Texas Department of Public Safety to lease a 4,700-square-foot building from DPS for essentially nothing. DPS will maintain the building, while the city will pay for improvements with an Urban Areas Security Initia­tive grant designed to assist "jurisdictions in building an enhanced and sustainable capacity to prevent, respond to, and recover from threats or acts of terrorism," according to the Department of Justice. However, Austin Police Department Chief Art Acevedo said the center, modeled on an "all-crimes, all-hazards approach," will only "try to connect some dots in terms of emerging criminal threats and in terms of investigating and solving crimes." Private-sector data – travel records, grocery store purchases, and the like – while incorporated in several other centers, will not be a part of the ARIC's data stream, he said, only arrest reports and incident reports. "There has to be a criminal predicate in order for it to be in the system," he said, and all the involved agencies will have to agree to guidelines drafted by an Urban Area Work­ing Group, which includes Austin's mayor and city manager. Citing a commitment to protecting privacy, Acevedo said, "We are well aware of some of the mistakes that have been made in the past in other fusion centers, and I can assure you ... we will not make those same mistakes."

Still, worries of Big Brother were on ample display. ACLU policy analyst Laura Martin said, "Fusion centers undermine our basic right to privacy, and fail to make us safer" by creating a needle-in-the-haystack approach to crimefighting. Texans for Accountable Government's John Bush began his diatribe wearing a red Zorro mask, explaining, "The whole idea of fusion centers and these surveillance cameras we've got going makes me a little bit paranoid, especially when you throw in the mix ... the Human ID program, and on top of that they have the advanced facial recognition program, which will actually allow, from up to 5,000 feet away, these surveillance cameras to scan your face, match it with a picture that we already have on databases, thanks to the DPS, and identify you as you're walking around in your daily activities." Bush added that, for all of Acevedo's avowed respect for privacy, the chief's "not always going to be here."

Initially, Laura Morrison moved for postponement of the item, to cheers from the crowd; Bill Spelman seconded the motion to discuss further oversight. The "critical question," he asked, was: "How do we know [the center's privacy policies are] going to be followed? Who's gonna monitor this?" (Acevedo welcomed regular audits of the center, likely to be performed by the city.) The actual privacy policy is still being drafted; Acevedo said it should be finished by the end of the month and then made publicly available for feedback and possible revision, with an eye toward completing the interlocal agreement by September or October.

The center itself was initially slated for a November deadline but may be pushed back to assuage privacy concerns. It was made clear – perhaps overly clear by council members looking to expedite lengthy discussion on the item – that the day's lease approval was only the first step in creating the fusion center. "I think we'll find more common ground than John thinks we will," Acevedo said of Bush's concerns. Whether they will, for now, is as unknowable as the terabytes of data flowing through a fusion center at any given moment. 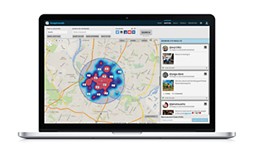